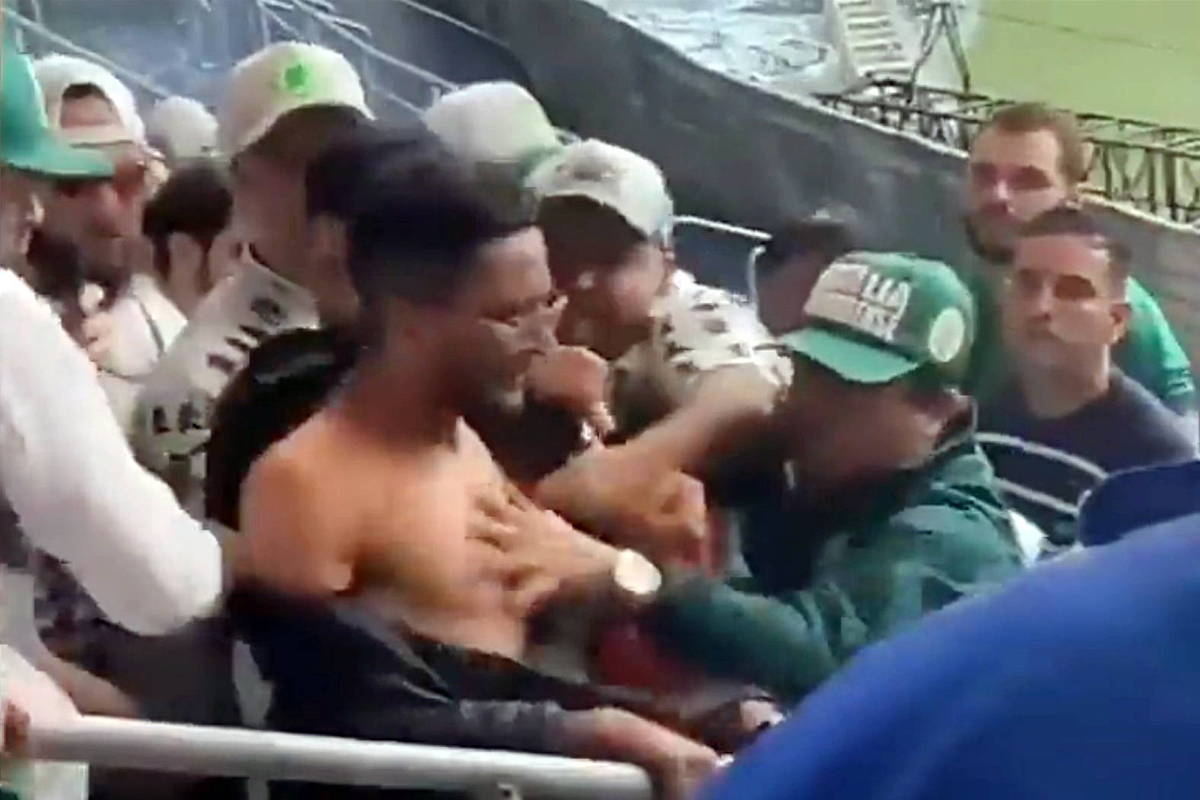 Palmeiras released this Monday (22) a note to repudiate the aggression suffered by an alleged Flamengo fan infiltrated among the Palmeiras at Allianz Parque, on Sunday (21), in a 1-1 draw valid for the 23rd round of the Brazilian Championship. .

In videos that circulate on social networks, it is possible to see a boy, who would be a fan of the Rio de Janeiro team, being attacked and having his shirt torn after being discovered by the fans of the alviverde team.

In the statement, Palmeiras states that it “repudiates any and all acts of violence, including the reckless attitude of opposing fans who, with the aim of causing turmoil, infiltrated one of the club’s organized supporters during the game.”

According to Drade (Police Station for Repression of Sports Intolerance Crimes), an organ of the Civil Police of São Paulo, two Palmeiras who appear in the videos have been identified and must be subpoenaed. Responsible for the case, delegate Cesar Saad said that the injured fan did not press charges.

The São Paulo club also states that it “collaborated with the public security agencies, which have already carried out the identification of everyone, and is taking the relevant punitive measures”.

The confusion in the stands was not mentioned by the referee Ramon Abatti Abel (SC) in the summary of the match.

The STJD (Superior Court of Sports Justice) was questioned by the report about the possibility of Palmeiras suffering some punishment for what happened. Without specifically citing the confusion in the São Paulo team’s arena, the court’s advice said all infractions that occurred inside the stadium are subject to analysis and possible denunciation by the Prosecutor’s Office.

In addition to the videos that show the aggression, another image that circulates on social networks shows another Flamengo fan infiltrated in the home crowd and making a provocation precisely because he is in the middle of the area destined for alviverdes.

Palmeiras stressed that there was a sector for visiting fans at the stadium. Flamengo players had not been present at Allianz Parque for three seasons. In 2019, cariocas were prevented from attending a game at the stadium after the CBF (Brazilian Football Confederation) responded to a recommendation from the São Paulo Public Ministry, which pointed out safety issues to stop the red-blacks.

In 2020 and 2021, the clashes between Palmeiras and Flamengo in the arena did not have the presence of fans due to the Covid-19 pandemic.

Check out the full Palmeiras note:

“Palmeiras repudiates any act of violence, including the reckless attitude of opposing fans who, with the aim of causing turmoil, infiltrated one of the club’s organized fans during yesterday’s game.

In addition to the conduct being inappropriate and generating risks in any match, it should be noted that, as is public knowledge, there was a specific sector dedicated to visiting fans.

Appreciating the well-being of those present at the games at Allianz Parque, Palmeiras immediately repressed the conduct of those involved, collaborated with public security agencies, which have already carried out the identification of all, and is taking the relevant punitive measures.”

Previous The Pope: the diversity of ministries is a wealth, but not “clericalizing” the laity
Next A trip across the Tagus: the ultimate summer experience