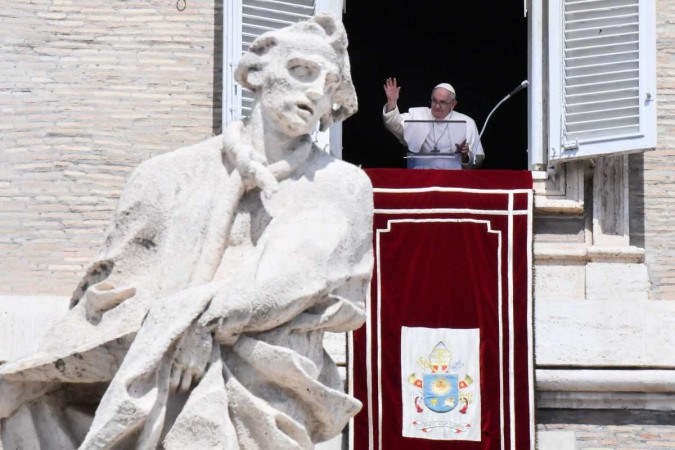 Pope Francis broke his silence on Nicaragua to express “concern” about the tense political situation in that country, but avoided specifically mentioning the detention of religious and condemning the repression by Daniel Ortega’s government.

“I follow closely with concern and pain the situation created in Nicaragua, which involves people and institutions,” said the pontiff after the blessing of Sunday’s Angelus in St. Peter’s Square.

This was the first time the pope has spoken publicly on the sensitive topic, which has sparked great controversy among analysts over Francis’ silence.

Many have questioned the reasons for the Latin American pope’s nearly two-week silence on the serious crisis between the Church of Nicaragua and the Ortega government, deepened after the arrest on Friday of the Bishop of Matagalpa, Rolando Álvarez, an outspoken opponent of the regime.

Persecution, search operations, arrests, closure of Catholic media outlets and even the exile of religious are among the measures faced by the Church in the Central American country in recent years.

Francis, who is in the habit of speaking on various topics, from natural catastrophes to personal tragedies, did not directly mention the arrest of Bishop Álvarez and a group of collaborators who were in the diocese, although he did indirectly mention “people and institutions” affected.

In his message, the Pope said: “I want to express my conviction and desire that through open and sincere dialogue it is still possible to find the bases for a respectful and peaceful coexistence.”

For some analysts, the pontiff’s prudence, his call for dialogue and the fact of avoiding confrontation with the government mean an invitation to diplomacy, the search for solutions.

“A papal silence does not mean inactivity or lack of decision, no, none of that. It means that they are working on other plans,” Rodrigo Guerra, secretary of the Pontifical Council for Latin America, said last week.

The entire Latin American Church, from the influential Latin American Episcopal Council (CELAM), through the archbishops of Costa Rica, El Salvador, Mexico and even the Honduran Cardinal Óscar Andrés Rodríguez Maradiaga, considered close to the Pope, expressed solidarity with the persecuted religious , asked for prayers and lamented the situation.

“A rupture is very easy, but the wisdom of the Holy Father is that he seeks ways of dialogue, because there are millions of Catholic faithful who are also suffering,” Rodríguez Maradiaga told Catholic press on Sunday.

“The pope’s words certainly disappointed many because they expected the pope to condemn some and defend others,” commented Colombian theologian Consuelo Vélez.

“The pope expressed himself in the terms he presented in his last encyclical, Fratelli Tutti”, he highlighted, in a reference to the papal document dedicated to fraternity and social friendship.

The text summarizes the line adopted by Francis in almost 10 years of pontificate. And not just for Nicaragua, a conflict he is familiar with, but also for the Russian war in Ukraine. The Pope always defends dialogue.

Since taking over the leadership of the Catholic Church in 2013, Francis has wanted to be identified as the artisan of dialogue and peace, a convinced pacifist.

Previous Tabs coming: Windows 11’s File Explorer should receive a new function in 2022
Next Actress reveals she was pressured to pose for sexy magazines