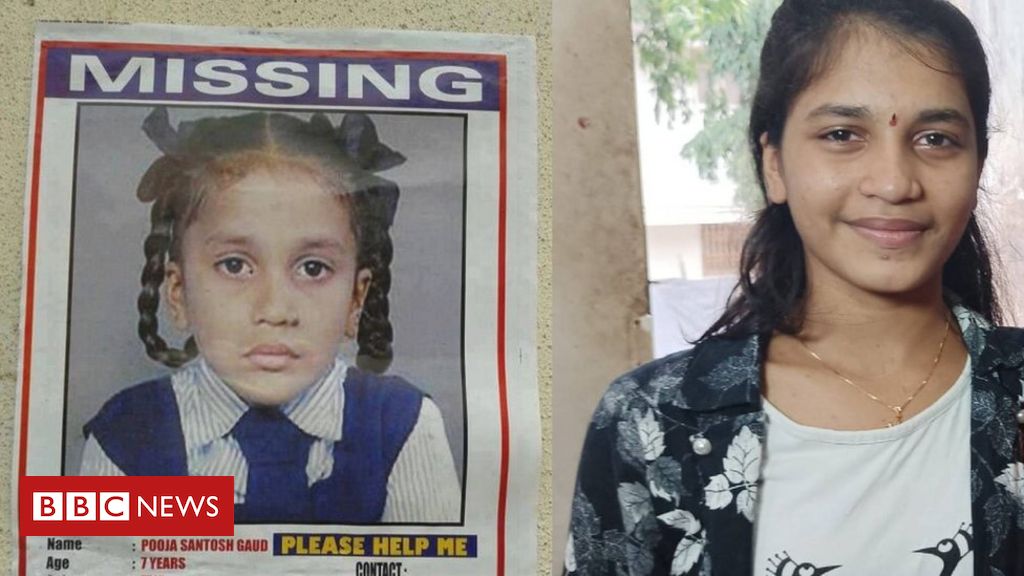 After nine long years, Pooja Gaud is finally back on her mother’s lap.

Pooja disappeared on January 22, 2013, when she was 7 years old. She says a couple caught her outside the school in the city of Mumbai in the western Indian state of Maharashtra.

On August 4 of this year, she was found after what her mother described as “a miraculous escape”. Now, she is 16 years old.

“I lost hope of finding my daughter. But the gods were kind to me,” says her mother, Poonam Gaud.

Police said the girl was kidnapped by Harry D’Souza and his wife, Soni D’Souza, because the couple had no children.

Before disappearing, Pooja lived with her two brothers and her parents in a small house in a suburban neighborhood.

The day she disappeared, the girl had gone to school with her older brother, but they had a fight and, late, the brother entered the school and left her behind. That’s when the couple promised to buy her an ice cream and took her away.

Pooja says the couple initially took her to Goa and then to Karnataka, states in western and southern India, and threatened to hurt her if she cried or drew attention.

She recalls that she was allowed to attend school for a short time. However, after the couple had a child, they took her out of school and they all moved to Mumbai.

Pooja says the abuse got worse after the baby was born.

The house where D’Souza lived was close to the girl’s family, but she did not know the ways, in addition to being permanently watched. She didn’t have money or a phone, she couldn’t ask for help or try to find her relatives.

One day, Pooja took the couple’s cell phone while they slept and wrote her name on YouTube. She found videos and posters mentioning her kidnapping and numbers she could call for help.

“That’s when I decided to seek help and run away,” she says.

But it took seven months for her to work up the courage to discuss the matter with Pramila Devendra, 35, a domestic worker who worked in the same house where Pooja was a nanny.

Devendra immediately agreed to help her. One of the numbers on the missing persons poster belonged to Rafiq, a neighbor of Pooja’s mother. First, mother and daughter talked via video call and soon a meeting was arranged.

Her mother says she looked for a birthmark that only she knew existed on her daughter, and when she found it, she was filled with emotion. “All my doubts disappeared immediately. I knew I had found my daughter,” she says.

Devendra is happy to have been a part of this reunion. “Every mother should help a child who asks for help. We may not be their birth mothers, but we are still mothers,” he says.

Once reunited, Pooja, some relatives and Devendra went to the police station to file a complaint. “I told the police everything. I even told them where my kidnappers lived,” said the teenager.

Thanks to the report, the police were able to identify and arrest the accused.

Milind Kurde, chief inspector at Mumbai’s main police station, told the BBC the couple will also be charged with the crimes of threat, assault and violation of child labor laws.

Pooja’s return home brought joy not only to her family, but to everyone who knew her. The neighbors who lived with her when she was little now visit.

Meanwhile, her mother is trying to make up for lost time by cooking her daughter’s favorite food and combing her hair. They try to spend as much time together as possible, but life is hard right now.

Pooja’s father, who was the family’s only source of income, died four months ago of cancer. So her mother started selling sandwiches at a train station to support her three children. But the profits are small and she struggles to make it to the end of the month.

“Now I also have legal expenses. Our condition is so complicated that if I miss work, we won’t have money to eat the next day.”

Pooja is still processing the trauma. She has nightmares and feels sad that she will never be able to see her father again. For her safety, she spends most of her time at home or is accompanied by a family member when she goes out.

“I want to help my mother financially, but they won’t let me. I also want to study,” he says.

Despite these problems, the mother says she couldn’t be happier. “The work is exhausting, but every time I see Pooja, I find strength again. I’m so glad she’s back.”

Previous Galaxy Z Flip 4 and Z Fold 4 arrive in Brazil; Price and Specifications
Next Cara Delevingne Joins PUMA for “Conference of the People”