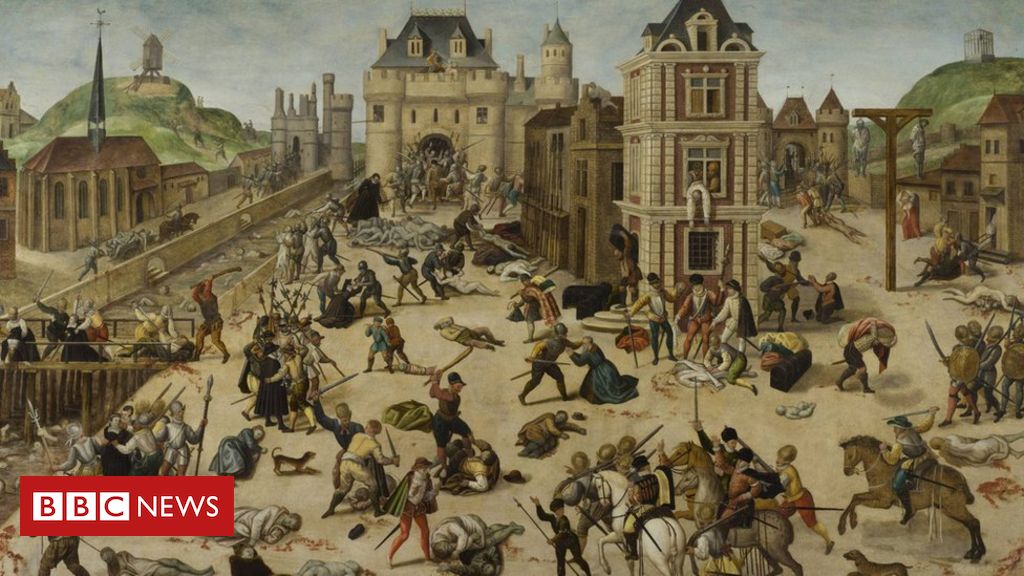 What was the Saint Bartholomew Massacre, which took place 450 years ago

It was a massacre, a veritable carnage that was seen in Paris 450 years ago. The episode went down in history as Saint Bartholomew’s Night, because it began in the early hours of the morning of the 24th, the date on which Catholics celebrate the saint.

The great slaughter, which according to reports at the time even dyed the waters of the River Seine with blood, was an attempt by the Catholic majority to exterminate the Protestant minority – in this case, the Huguenots, followers of the Protestant line of French theologian Jean Calvin (1509-1509). 1564).

But the religious contours were actually a pretext, in a world where power was far from secular, for geopolitical disputes. In the context, it is worth mentioning that France was experiencing the so-called religious wars, with eight episodes confronting Catholics and reformers between 1560 and the end of the 16th century.

If the French throne was occupied by a Catholic family — the House of Valouis, which reigned between 1328 and 1589 — Calvinism advanced mainly in the southern and western regions, with many nobles among its adherents.

“She was a very discreet woman, but an anti-Protestant by training. She came from such a tradition”, points out historian and theologian Gerson Leite de Moraes, a professor at Mackenzie Presbyterian University.

So Paris prepared to host an event that, theoretically, was supposed to seal peace between the two groups. A very symbolic marriage, uniting Catherine’s daughter Princess Margaret of Valois (1553-1616) and a Huguenot leader, Henry of Bourbon (1553-1610) — who would later become King Henry IV.

“The marriage was an unsuccessful attempt to bring Catholics and Protestants back together in France,” explains Vaticanist Mirticeli Medeiros, a researcher in the history of Catholicism at the Pontifical Gregorian University in Rome.

“Remembering that the wars of religion took place more expressively in France and Spain in this period.”

“There was an agreement between the Protestant faction, led by Henrique de Bourbon, with the Catholic faction, represented by the royal house. This marriage was intended to seal a kind of pact, an attempt to appease the spirits between Catholics and Protestants”, points out Moraes .

An attack — and a carnage

Paris was partying. It was as if there was a white flag, a truce on account of the royal wedding, which took place on August 18, 1572.

Many Huguenots traveled to the capital to follow the festivities.

“Everything took place in a mild climate, until the 22nd”, says Moraes.

“He didn’t die in that incident, but it raised the temperature,” says Moraes.

Coligny was seen as an enemy by his background.

“He was leader of the Protestant party and had already joined the armed struggle against Catholics years before, although part of the historiography describes him as someone who preferred diplomacy”, emphasizes Medeiros.

There is no absolute consensus, but most historians believe that this attack was engineered by Queen Catherine herself.

“As the attempt was not successful, she then determined that the service be carried out in full, now with the participation of King Carlos 9 himself”, says Moraes.

Taking advantage of the fact that the city was with the main Calvinist leaders, on account of the marriage, the Catholic nobles would then have prepared a list with the names of those who were to be executed. The plan was to make the Protestant faction headless.

The soldiers started work in the early hours of the 23rd to the 24th.

“But things got out of hand. The killing ended up being indiscriminate”, adds the historian.

in your book A History of Christianity, historian Clyde L. Manschrek, a professor at Rice University in the United States. States, reports that the streets were “covered with dead bodies, the rivers were stained, the doors and gates of the palace spattered with blood.”

“Wagons loaded with corpses, men, women, girls and even children were thrown into the Seine, while torrents of blood flowed in many areas of the city,” he wrote.

Manschrek even found reports of a little girl who was “bathed in the blood of her murdered parents and threatened with the same fate if she too became a Huguenot.”

According to information at the time, 1100 bodies were removed from the River Seine in the days following the massacre. There is no exact number of how many were executed. More restrained historians put 3,000. Others believe the figure may have been 100,000. Most, however, usually place the number of dead between 20,000 and 50,000.

What nobody questions was the brutality of the violence that was seen in the streets.

“Protestants were beheaded, mutilated, disemboweled. It was a very violent situation, an attack against the Calvinist cause in a moment of truce, of peace, after all there had been a wedding”, comments Moraes.

“Of the French Protestants who went to Paris, few escaped with their lives. Those who did, fled or went into hiding,” he says.

“Thousands of Huguenots, along with their commander, Gaspard de Chatillon, were killed,” adds Medeiros.

“Although this is the most famous massacre of Protestants, the losses occurred on both sides, whether on the Catholic side or on the Protestant side”, recalls Medeiros.

For historian Moraes, the moment was a “crisis of Christianity”.

“In religious wars, there are no good guys or bad guys”, he relativizes.

More than grief and scars, the episode evidently left historical consequences. The position of the Catholic Church at the time was controversial. When the news reached Pope Gregory 13 (1502-1585), he would have celebrated a mass in allusion to what had happened.

“There is controversy about this because many sources say that he celebrated in thanksgiving for the death of the ‘heretics’, which contributed to further intensify the situation between Catholics and Protestants, as if the Pope had sanctioned a slaughter”, comments Moraes.

“But others claim that the pope did this inadvertently, unaware of the gravity of what had actually taken place.”

“It was not an act ordered directly by the Catholic Church, but by Carlos 9 and his mother Catarina de Medici, who were Catholics”, emphasizes researcher Medeiros.

“The Church exercised its spiritual sovereignty over France and the other Catholic kingdoms, but did not interfere in matters of government. It is true that everything took place under the ‘blessing and seal’ of the Church, but it was not a massacre ordered directly by Rome. “

Religious freedom, however, would be a much later achievement. Medeiros explains that the issue involved “territorial disputes, especially when the princes took part in this dispute”, that is, it was something that had “gone beyond the religious sphere”.

In France at the time, it was established “that subjects should profess the faith of their sovereigns”, she explains.

“They were obliged. Anyone who did not want to profess the court’s faith should leave the territory”, says Medeiros.

It was not until 1648 that an agreement began to guarantee a certain “freedom of conscience”. Even so, Medeiros recalls that anyone who did not profess the king’s religion was still considered a “dissident”.

“The main leaders either died or had to flee, go into exile. The Calvinist cause died in France and was reborn in other places, such as the Netherlands”, says the historian.

But another consequence was the theoretical development of a debate that questioned the very idea of ​​absolutism.

After all, if the king was seen as a representative of God on earth, an argument was needed that enabled this right to resist him.

“How to face a king who considers himself representative of God? Protestants end up developing a theory of resistance”, points out Moraes.

In this context, works by Huguenot intellectuals were published. The main ones are Franco-Galliaby the thinker François Hotman (1524-1590), Law of Magistrates over their Subjectsby theologian Théodore de Bèze (1519-1605), and Protest Against the Tyrantsby the theologian Philippe Duplessis-Mornay (1549-1623) and by the diplomat Hubert Languet (1518-1581).

“In other words, from an apparent defeat, very interesting works emerged in the wake of contesting absolutist power”, comments the historian Moraes.

In addition, there was still an ironic quirk of history. The night of the episode celebrates Saint Bartholomew, as Nathanael became known in Catholicism, one of the 12 apostles of Jesus.

According to tradition, he would have been martyred while working as a preacher in India, in the year 51 of the Christian era. And his death would have occurred in a violent way, by flaying – that’s why he is represented like this, holding his own skin, in the Sistine Chapel, in Michelangelo’s masterpiece (1475-1564).

“The supposed martyr Saint Bartolomeu would end up, by the date, associated with this martyrdom of the Calvinists in the 16th century”, compares Moraes.

Through a communiqué, the Kremlin that stopped attacking the neighboring country with high-precision missiles ‘for …