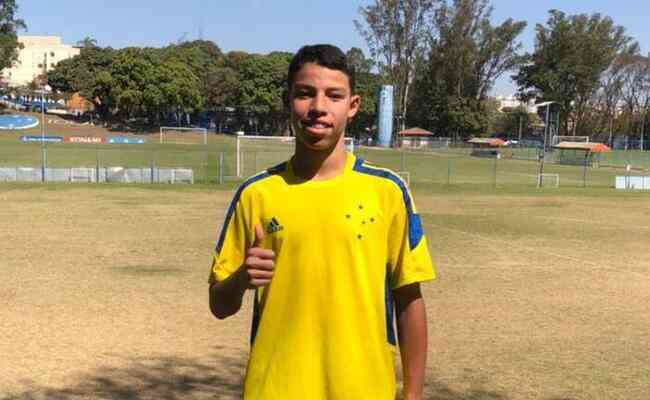 Cruzeiro is negotiating to have Geovani Jnior, godson of Adriano Imperador and nephew of Paulinho, ex-Fluminense, in the base categories of the club. The celestial board is talking to the father and manager of the 16-year-old boy, who will undergo an evaluation period at Toca da Raposa I, in Belo Horizonte, in the coming days.

Geovani works as a midfielder and has the dream of becoming a professional player. He lives in Vila Cruzeiro, in the Penha complex, in the North Zone of Rio de Janeiro, and tries to follow in the footsteps of his godfather Adriano, who was also raised in the Carioca community before starting to play football.

The youngster began his development in the youth categories of Amrica-RJ and accumulated passages in Vasco and Portuguesa-RJ. With good prominence in these clubs, Geovani caught the attention of Cruzeiro.

However, two weeks ago, Geovani suffered a great trauma and almost had his dreams dashed. On his way to the capital of Minas Gerais, the boy was the victim of an attempted robbery that ended in the death of his manager Thiago Soares Duarte, 34 years old.

Geovani and his father, Geovani de Paula, were in the businessman’s car heading to Galeo airport, in Rio, when they were surprised by five criminals. The bandits announced the robbery, but Thiago did not surrender and tried to flee the scene.

The car was shot with three rifle shots. One of the shots hit the agent in the abdomen. He was rescued and taken to Hospital Getlio Vargas, also in Penha, but he could not resist and died after the operation.

in contact with the supersports, Luiz Bastos, grandson of Garrincha – Botafogo’s idol in the 1950s and 1960s – and a personal friend of Geovani’s family, told us about the boy’s post-shock period. According to him, the young man was very shaken by the situation, but he received support from many people and never thought about giving up on his dreams.

“He was in shock for a week, but he’s still in the trauma period. That period for a 16 year old doesn’t go by quickly. You’ll see a person who is helping you shot by your side come to death, asking for help, you imagine how is the head”, he began.

“It was like I told his father, I consider him as a man, because it’s not just anyone who pulls out strength to keep chasing his dreams”, he completed by emphasizing Geovani’s willpower.

After this event, the boy’s family rescheduled the tests on Cruzeiro. Geovani landed in Belo Horizonte this Monday (22/8) and had the support of Adriano.

The former Brazilian Seleo striker posted a message on social media wishing him luck and success in the young midfielder’s career. “God bless you. Good luck on your walk. We are together”, wrote his profile on Instagram.

Bastos, who took on the role of Geovani’s manager after the tragedy, explained how the boy’s observation process at the Minas Gerais club would be. He hopes that the testing period will be productive and that the parties can settle as soon as possible.

“We’re going to stay at Cruzeiro for an evaluation period, to really get to know him, because we can’t arrive, hit the hammer and say he’s hired. Our perspective on him being able to be hired by the club as soon as possible,” he said.

The agent also said that Cruzeiro understood the situation and was willing to help Geovani recover from the trauma as soon as possible.

“We are all here in BH so that in these first days he can feel more comfortable and cuddled. It is a very complicated process for him at the moment. psychological support for him”, he concluded.

In contact with the report, Cruzeiro reported that hundreds of athletes undergo evaluation at the club monthly, and Geovani is one of those cases. The boy will be observed by the base’s technical team in the coming days and, if approved, he will sign definitively with Raposa.

Previous My Little Earth, Japanese film by Emma Kawawada arrives at À LA CARTE this week – Jornal do Oeste
Next ZTE Axon 30 with Under-Display Camera and Snapdragon 870 at R$1,482 – All in Technology