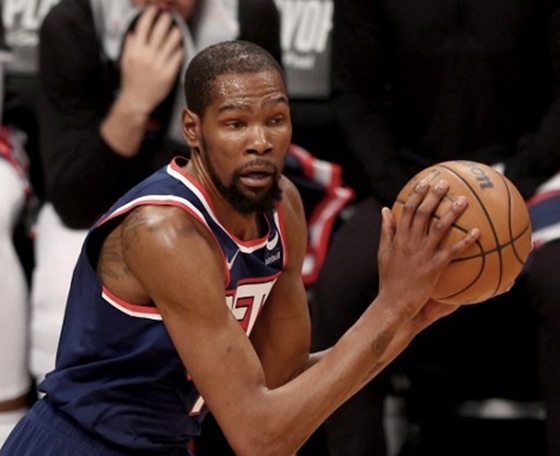 No trade deal, Kevin Durant will stay with the Nets

the great novel of offseason NBA season seems to have reached its end, and in an unexpected way. After formalizing a trade request nearly two months ago, Kevin Durant will remain with the Brooklyn Nets, according to a statement written by Sean Marks, the franchise’s general manager.

So, without an advantageous offer, the 33-year-old star starts the season in the New York team. Durant is under a guaranteed contract for the next four seasons ($194.2 million in salary).

“Steve Nash and I, along with Joe Tsai and Clara Wu Tsai (franchise owner and his wife), met yesterday in Los Angeles with Kevin Durant and his agent Rich Kleiman. We have agreed to go forward with our partnership. We are focused on basketball, with only one collective goal in mind: to build a franchise to bring a title to Brooklyn,” Marks said in the statement.

It is worth remembering that Kevin Durant requested a trade request from the Nets at the beginning of the offseason. The Phoenix Suns and Miami Heat would initially be the 33-year-old’s two favorite destinations. However, the New York team hoped to get the best deal possible for the star, no matter which team would acquire him.

So with an athlete of Durant’s stature in the market, the Brooklyn franchise was certainly looking for an unprecedented return of players and player choices. draft.

So, with one of the best NBA players available on the market, several teams tried to acquire Durant. Some of them even formalized offers. However, none of them pleased the Nets.

According to the insiders In addition to the Suns and Heat, at least nine other teams — the Atlanta Hawks, Boston Celtics, Denver Nuggets, Memphis Grizzlies, Milwaukee Bucks, New Orleans Pelicans, Philadelphia 76ers, Toronto Raptors and Washington Wizards — have shown interest in the star. That is, more than a third of NBA teams were behind Durant.

The soap opera, which began on June 30, with Durant’s exchange request, had some dramatic chapters. After all, the star even gave the Nets an ultimatum. According to reporter Shams Charania, from the portal The Athleticthe 33-year-old winger met with Joe Tsai a few weeks ago and demanded the departure of GM Sean Marks and coach Steve Nash.

Also according to Charania’s report, Durant indicated that he would not believe that the Marks and Nash duo would make a difference in the Nets for years to come. That is, with them, the athlete doubted that the team had any chance of being champion.

However, Tsai took to social media and stated that she supports the GM and the team’s coach. “Our management (Marks) and coaching staff (Nash) have my support. So, we will make decisions in the best interest of the Brooklyn Nets.”

Parallel to the imbroglio involving shirt 7, the Nets went through another troubled soap opera this offseason. Marks and Tsai discussed the possible departure of Kyrie Irving due to off-court issues.

To make matters worse, the newspaper New York Post revealed that the point guard hates Nash and Marks. A source close to the Nets pointed out that Irving was not happy with the duo’s leadership style. In this way, the crisis in the franchise seemed to be far from over.

The relationship between Irving and the Nets took a toll in 2021/22. After all, the point guard missed the Brooklyn team in 37 of the 43 games played in New York during the regular season. The reason was the non-immunization against COVID-19. Then, because of the city’s vaccination mandate, the athlete was banned from playing at the Barclays Center, home of the Nets.

In the season-ending interview, Marks did not guarantee Kyrie would stay. According to the manager, the franchise wants players who are not selfish and who are available to act and help on the court, that is, a direct message to the point guard.

Thus, Irving’s prolonged absence was one of the factors for the team’s poor campaign. From contender to title, the Nets became one of the biggest disappointments of the season. As a result, the Nets were only seventh in the Eastern Conference and, in playoffs“swept” in the first round by the Boston Celtics.

All in peace on the Nets?

at the beginning of offseason, contrary to expectations, Irving exercised his contractual option to stay one more season with the Nets. As such, he will receive $36.9 million in salaries in 2022/23. The news came out the same day the franchise gave the player the go-ahead to look for a new team.

However, hours after the point guard’s decision, Durant requested a trade request. Since then, the behind-the-scenes of the franchise has been hectic.

yesterday, the Jumper Brazil brought the news that the Nets are looking for a reconciliation with Irving. So, with him remaining on the roster, the team hoped to convince Durant to drop the trade request.

According to Charania, Kyrie is working with teammates and maintaining constructive dialogue with the franchise. Additionally, the Nets have made it clear to interested teams that they plan to keep the 30-year-old guard.

So, with no trade agreements for Durant and Irving, and with “peace restored”, it seems that the stars are now trusting the team’s board and coaching staff again. Let’s see how long…