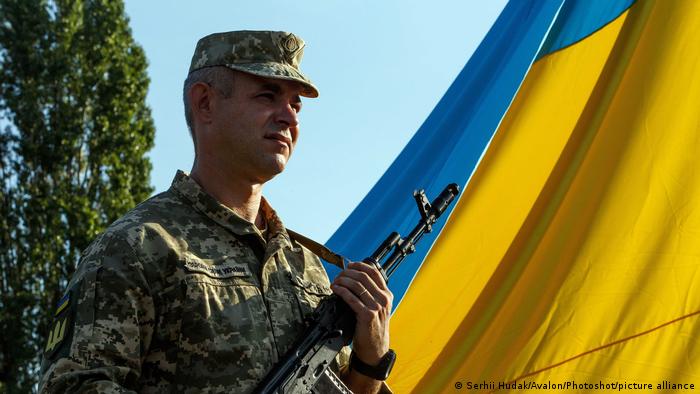 Date that marks independence from the Soviet Union coincides with six months of war. Authorities warn of risk of Russian bombing and ban large gatherings in the capital. “We will fight until the end”, promises Zelensky. Residents of Kiev woke up to the sound of warning sirens this Wednesday (24/08), a date that marks Ukraine’s Independence Day and six months of the war initiated by Russia in the country. Ukrainian President Volodymyr Zelensky urged the population to remain vigilant and promised that his country would fight the Russian invasion “to the end”.

“Russian taunts and brutal attacks are a possibility. Please strictly follow safety rules. Please observe the curfew. Pay attention to sirens. Pay attention to official announcements. And remember: we all need to reach victory together,” Zelensky said in a video address.

Authorities in the Ukrainian capital banned large gatherings in Kiev until Thursday amid fears of heavy Russian missile attacks during the national holiday, which celebrates Ukraine’s declaration of independence from the Soviet Union in 1991. A curfew has been imposed on the frontline in Kharkiv, situated in eastern Ukraine and which has withstood months of bombing.

“Russian invaders continue to carry out air and missile attacks against civilian targets on the territory of Ukraine. Do not ignore signs of civil defense,” the Ukrainian army’s general staff said in a statement issued on Wednesday.

A small number of people gathered in Kiev’s central square in the morning, where captured Russian tanks were put on display over the weekend and where the Ukrainian national anthem is played daily at 7 am.

“I can’t sleep at night because of what I see and hear about what is being done in Ukraine,” a pensioner who identified herself only as Tetyana told the Associated Press (AP) news agency. “This is not a war. It is the destruction of the Ukrainian people.”

A bomb attack outside Moscow that killed Daria Dugina, daughter of Russian right-wing ideologue Alexander Dugin, last Saturday raised fears that Russia could step up attacks on Ukraine this week.

Russian officials blamed Kiev for the death of Dugina, who was a nationalist and TV commentator. It is suspected that his father, appointed as Putin’s guru, was the real target of the attack. The Ukrainian government has denied any involvement in the incident.

On Monday, the US State Department issued a security alert, pointing out that Russia was stepping up efforts to launch attacks against Ukraine’s civilian infrastructure and government facilities in the coming days, and could even take advantage of the Ukrainian national holiday to do so. .

“The security situation across Ukraine is highly volatile, and conditions could deteriorate without warning,” the alert said.

The US Embassy in Kiev urged US citizens who are still in Ukraine, if possible, to leave the country immediately, via available land routes.

“We will fight until the end, without concessions”

Exactly six months ago, on February 24, Russian President Vladimir Putin ordered tens of thousands of troops to invade Ukraine. The war killed thousands of civilians, forced more than a third of the Ukrainian population of 41 million from their homes, left cities in ruins and shook the global economy. There are no immediate prospects for peace talks between the two sides.

In his speech on the occasion of Independence Day, Zelensky said that Ukraine will not make concessions to Russia.

“Six months ago, Russia declared war on us. On February 24 we were told: you have no chance. But this August 24, we say: Happy Independence Day, Ukraine!” declared Zelensky. “We don’t care what army you have, we only care about our country. We will fight for it until the end”, he promised.

“We’ve been standing firm for six months. It’s hard, but we clenched our fists and fought for our destiny,” he continued. “Each new day is a reason not to give up. After such a long journey, we have no right not to go on to the end.”

Regarding Russia, Zelensky said: “We are not going to seek a deal with terrorists. For us, Ukraine is all of Ukraine. All 25 regions, without any concessions.”

At a virtual summit on Crimea on Tuesday, Zelensky told representatives from about 60 countries and international organizations that Ukraine would expel Russian forces from the peninsula using any means necessary and without consulting other countries beforehand.

In addition to Crimea, which Russia annexed in 2014, Russian forces have expanded their control to areas in southern Ukraine, including the Black Sea and Sea of ​​Azov coasts and parts of the eastern Donbass region comprising Donetsk provinces. and Lugansk.

Ukraine’s Armed Forces claimed that nearly 9,000 of its servicemen were killed in the war. Russia has not disclosed its casualties, but US intelligence estimates that 15,000 were killed in the conflict, which Moscow calls a “special military operation” to “denazify” Ukraine.

Previous Microsoft Announces Xbox Series S Special Edition Giveaway Inspired by Top Gun: Maverick
Next In Paris, Neymar appears with a Brazilian model on his lap during a party at home: know who he is