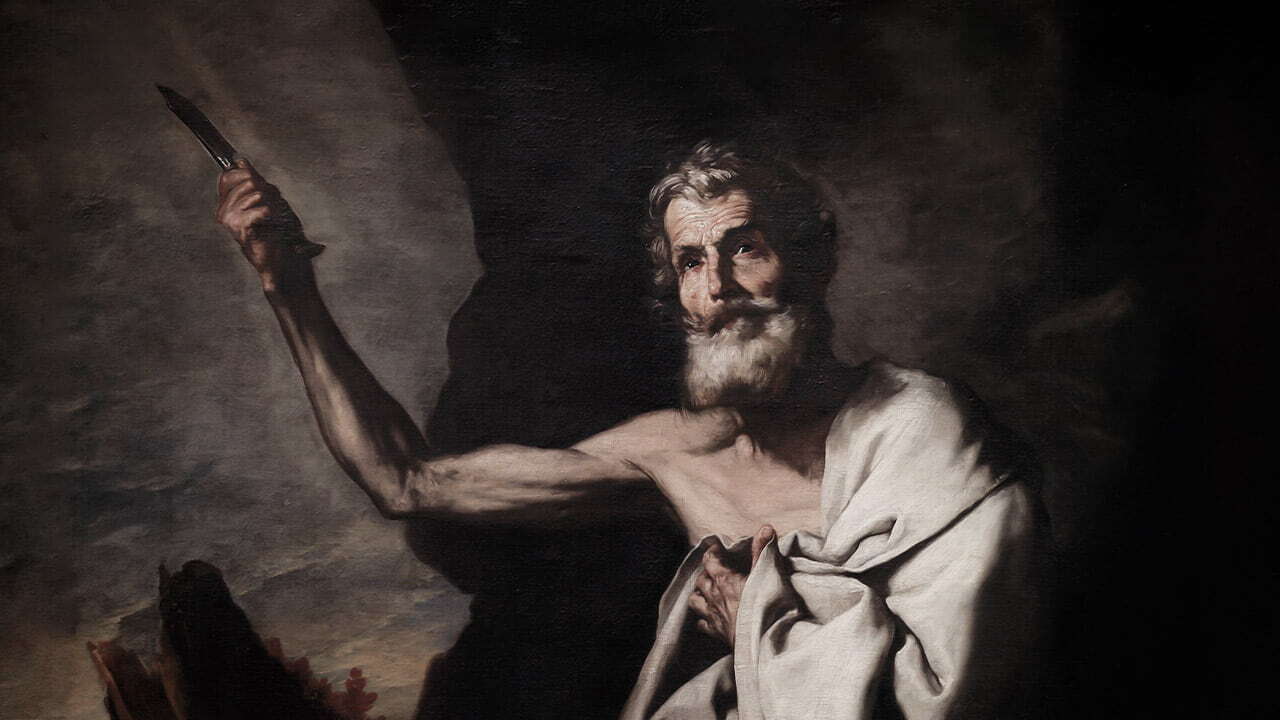 Gospel of Our Lord Jesus Christ according to Saint John
(Jo 1.45-51)

Philip met Nathanael and said to him, “We have found him of whom Moses wrote in the Law, and also the prophets: Jesus of Nazareth, the son of Joseph.”

Nathanael said: “Can good things come out of Nazareth?” Philip replied: “Come and see!” Jesus saw Nathanael coming to him and commented, “Here comes an Israelite indeed, a man without deceit.” Nathanael asked, “Where do you know me from?” Jesus replied, “Before Philip called you, while you were under the fig tree, I saw you.” Nathanael replied, “Rabbi, you are the Son of God, you are the King of Israel.”

Jesus said, “Do you believe because I said to you, I saw you under the fig tree? Greater things than this you will see!” And Jesus continued, “Truly, truly, I say to you, you will see heaven opened and the angels of God ascending and descending on the Son of Man.”

Today we celebrate the feast of Saint Bartholomew, or Saint Nathanael, the two names by which this Apostle is called in the Holy Scriptures. The narrative of Saint Bartholomew’s vocation and conversion is at the beginning of Saint John’s Gospel, in that inaugural week in which Saint John begins narrating in a similar way to the book of Genesis: “In the beginning God created heaven and earth”; in the Gospel book, Saint John begins, saying: “In the beginning was the Word and the Word was with God and the Word was God”. As Genesis narrates creation in a week, John narrates the inaugural week of Jesus’ public life, and it is there, at that beginning, that Nathanael’s call takes place.

One of the most important things about this Gospel episode—important for Nathanael’s life and important for our life—is the fact that we recognize that God looks at us and knows us long before we look at Him and know Him. Here Jesus says the following: “Do you believe because he said to you, I saw you under the fig tree? Greater things than this you will see.”

More important than what Jesus saw Nathanael doing under the fig tree is the fact that Jesus saw him. Jesus sees each one of us, we are the object of a kind and divine gaze. He sees us before we even see him, before we have faith, before we know Jesus and give him the consent of our faith. God anticipates and comes to meet us. Just as, in the book of Genesis, God goes down to walk with Adam in the afternoon breeze and asks, “Adam, where are you?” and Adam was behind the bush, so Jesus, God the savior, comes down to come after the man and asks : “Natanael, where are you?”, and he was there, under the fig tree. God saw him, God went looking for him. God came to meet us.

This is a fundamental principle of Christian spirituality. In pagan religions, it is man who has to go in search of divinity, it is man who, as Saint Paul says in the Areopagus, “groping his way” seeks God in order to finally form a belief. We Christians do not; God comes to meet us, he sees us first, before we see him and, because he has seen us, his gaze enlightens us, enlightens faith in us. Therefore, we Christians do not have a human “belief”, we have a “faith” based on God himself who reveals himself. It is faith that changes us from within and shows us that we do not belong to ourselves, but to the One who has always seen us, loved us, chosen and saved us. Under this gaze of Jesus and his initiative, our entire spiritual life is founded.

May the vocation of Nathanael also enlighten us. Even if our parents may not have chosen us to come into the world, even if we didn’t want to be the way we are, there is a Goodness that chose us and called us the way we are, to seek conversion and, thus helped by His grace, we achieve eternal salvation.

Philip and Nathanael (cf. Jo 1.43-51). — v. 43f. The next day to the one where Andrew had brought his brother, wanted Jesus go deliberately to Galilee. As soon as you leave, or already halfway, according to most interpreters, or only after you have arrived, according to others, found Philipwho was from Bethsaida, and said to him: Follow menot only as a traveling companion, but as a disciple (cf. Mt 8.22). — See 45s. Just as André communicated this to his brother, Philip also communicates to his friend the treasure he had found. But Nathanael [1]not yet enlightened by grace, objects to him in the face: from Nazarethsuch a small and insignificant place, can something good come out? The words sound like a proverb, which, though nowhere attested, is perfectly explained, as it was a common persuasion among the Jews that the Messiah would come from a noble place (cf. Mt 2,5f), and Nathanael, being from Cana of Galilee (cf. Jo 21,2), would express some feeling of rivalry with Nazaré, a neighboring city.

V. 47. Jesus, seeing him approaching, praises Nathanael: Here is a true Israelite, ie, truly worthy of such a name, in whom there is no deceit, ie, a straight and simple man. — See 48. Nathanael said to him: Where do you know me from? These are the words of someone who is surprised to know that he is known by someone with whom he has never had contact. Jesus, however, shows that he knows not only him, but also his most secret thoughts and deeds: Before Philip called you, I saw you, when you were under the fig tree. It is difficult, if not impossible, to conjecture what he was doing. It is certain, in any case, that it must be something that only God or someone divinely instructed could know; otherwise, Nathanael would not take it as a sufficient sign to confess that Jesus is the Messiah (cf. Saint Thomas Aquinas, Super Ioann. I, l. 16, no. 325).

V. 49. Amazed at this manifestation of supernatural science, Rabbihe exclaimed, you are the son of God, you are the king of Israel (gr. ὁ υἱὸς τοῦ θεοῦ, σὺ βασιλεὺς εἶ τοῦ Ἰσραήλ). Now, as only later will Peter be praised for recognizing the divinity of Christ (cf. Mt 16:18), it is not likely that Nathanael recognized it from the beginning. A sign of this is, on the one hand, the fact that Jesus did not praise him and, on the other hand, the use of the apostrophe (explanatory) king of israelso that the expression The son of God simply designate here the messiah [2]. After all, Scripture itself calls Christ son of God and king of israel. Furthermore, since both the chosen people and—and above all—theocratic kings were called son of God (cf. eg Ex 4.22; Is 1.2; Jr 3.19; 31.20; 2Sm 7, 14, etc.), it is evident that the king Messiah would be designated in the same way, and in a singular and most excellent way, as there would be if he were king of Israel in a more sublime and perfect way than all the others. [3].

V. 50s. Jesus, in order to confirm the disciple’s incipient faith, promises him to see greater portents: You will see heaven open, and the angels of God ascending and descending (as in Jacob’s ladder, cf. Gen 28.10 ff) about the Son of man [4]. With these words, Jesus outlines and summarizes for the disciples, in somewhat figurative terms, what his public life will be. What was never given to any man, to ascend to God (cf. Jo 1:18), this very thing will be given to Him. Indeed, so evident will the manifestation of heavenly light be in his life, that it may rightly be said that the angels, as perpetual ministers, constantly ascending and descending from one extreme to the other, will present to God the desires of Jesus, and will bring from Father to Jesus your secrets and revelations, your glory and the power to perform miracles. At the same time, the peculiar nature of Christ is revealed: he will be a man on earth like the others, but united to God with intimate familiarity. The disciples themselves will be witnesses of this singular union. What Jacob had seen in dreams, they will see awake and in full light.

NB — This is the most likely interpretation of vv. 50-51 according to most modern authors, although in the past some have referred to the final judgment, while others have seen in them an allusion to the role of angels in the life of Christ (appearance in the resurrection, in the ascension, in the agony, etc.) or the they interpreted it in a mystical sense (as it was said: “You will see heaven open to receive from there, through the ministry of the angels, the heavenly treasures”, ie, graces and charisms). The text makes it clear, however, that the Lord’s words are addressed to the disciples. there giftsto which they promise something in the future to corroborate the faith their. Now at the resurrection angels appeared only to women, and at the ascension they did not appear about the son, but after he disappeared among the clouds. As for the last judgment, it is evident that in that day the faith of the disciples will no longer be able to grow; moreover, it would be inappropriate for this purpose to invoke an event so distant in time.

Spiritual commentary. — The) Literal sense: Jesus answered and said to him, Before Philip called you, I saw you, when you were under the fig tree., that is, “Even though you were alone under the fig tree and thought you were not seen by anyone, I saw you and I know what you were secretly doing and thinking there. I also saw and heard your conversation with Philip, when he called you to meet me, but you said to him: Can something good come out of Nazareth? From this you may conclude that I am more than a man, ie, the Messiah, or the Son of God”. — B) mystical sense: When you were under the fig treeie, in the shadow of the Law, I saw you to bring you to the light of my Gospel (cf. Saint Gregory the Great, Moral. XVIII 20). — ç) tropological sense: We learn to recognize and venerate God the Father and Jesus Christ present everywhere. When we are alone in the room, or even when we are thinking or secretly harboring some desire in our hearts, Christ sees us and penetrates our inmost thoughts. Let us, therefore, be careful not to think, desire, or do anything that offends the eyes of His Majesty. So he saw Nathanael and his deeds under the fig tree, so God saw Adam eating the forbidden fruit under the tree.