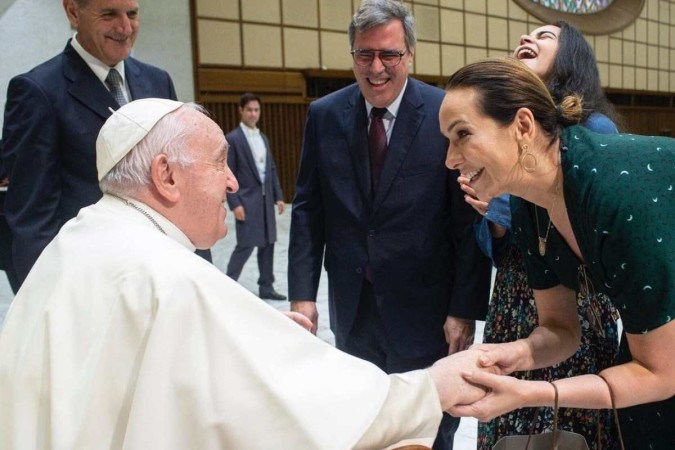 Journalist Maria Beltrão, currently in charge of the program it’s from homefrom Globo, shared on social networks, this Wednesday (24/8), records of a meeting with Pope Francis, in the Vatican, Italy.

In a post on Instagram, Maria Beltrão shared a series of photos from the meeting with the pontiff. She was accompanied by her husband, Luciano Saldanha, and her daughter, Ana.

“The day I met the Pope,” she wrote in the caption of the post.

Check out the clicks:

In a conversation with the website the yo-yoBeltrão said that he exchanged a few words with the pontiff and revealed that he is very good-natured.

“When I said that the Poor Clares of Rio de Janeiro and I were praying for him, the Pope looked at me and said: ‘I have a question: is cachaça water?”, he said.

The presenter also told how she managed to fulfill her dream of meeting the Pope.

“I have a friend, who is very good friends with a priest who works for the Pope, and I ended up becoming very good friends with that priest. Then one day I said: ‘if one day I have the opportunity to go to the public hearings, which take place on Wednesdays, I will.’ Then he replied saying that he had the chance to attend the hearing on the 24th (August)”, said Beltrão.

On the occasion, she presented the Pope with a box of brigadiers. “I asked Father Bruno if I could bring a sweet to the Pope. I hear he likes a lot of sweets, but he can’t eat too much. Then I said that he could share it with the other priests who live with him at Casa Santa Marta. I took it even if he didn’t eat it, but if he eats it, I’ll be happy already”, she concluded.