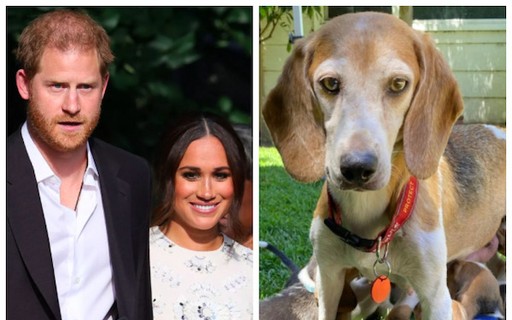 Prince Harry and actress and Duchess Meghan Markle adopted a 7-year-old dog rescued from an illegal animal testing laboratory. The adoption of the dog Mia by the celebrity couple came to the public through an article in the Los Angeles Times. The adoption was also celebrated on social media by the Beagle Freedom Project, one of the organizations that is serving as a shelter for the more than 4,000 beagle dogs rescued by California authorities in early July.

According to the Beagle Freedom Project, Mia had been used since birth to breed new beagles. She had just given birth to eight puppies when she was rescued. The dog’s babies have also been adopted by other California families.

The international press explains that the laboratory in the state of Virginia from which Mia was rescued had authorization to operate, but it was in illegal conditions, presenting a precarious environment for the welfare of animals. The Los Angeles Times report says that more than 300 dogs would have died there between January and July last year.

An animal rights lawyer, activist and owner of the Beagle Freedom Project, Shannon Keith told the American daily about her contact with Meghan Markle and her husband during the adoption process. She said she received a call from an unknown number on her cell phone. After the person on the other end of the line identified only as Meghan, she thought she was talking to actress Megan Fox. Keith only learned that she was interacting with Markle when she and the prince arrived at the organization’s headquarters.

Keith told of his first contact with the actress, by phone: “She called me on her cell, with an unidentified number, and said, ‘hey Shannon, this is Meghan’. We talked for 30 minutes and I was like, ‘Is that Megan Fox?’

The visit of the two celebrities took place at the end of a working day of the Beagle Freedom Project, at the institution’s headquarters. The couple went to the scene in the company of two security guards. From the start, Markle made it clear that he wanted to adopt an older animal.

According to Shannon Keith, Markle was emphatic right after picking up Mia: “’We’re going to adopt her.’ She told me, ‘No, we don’t want a puppy for Christmas photos… We want one that can contribute, an older one’”. She also reported that on the couple’s departure with Mia, Prince Harry asked for the puppy’s “favorite toy”, taking with her a stuffed fox.

The Los Angeles Times story also says that the actress had been following the story of the dogs rescued from the lab in Virginia since the incident became public. According to aides to the Duchess, she wanted to help from the beginning and was just waiting for the best time to adopt one of the dogs.

When she moved to the UK to live with Prince Harry, Markle took her puppy Guy with her, who was also adopted by an organization dedicated to rescued animals. Now Mia will live in the couple’s California mansion with Guy, another dog named Pula and the celebrities’ two children, Archie (3 years old) and Lilibet (1 year old).

Previous Roger says Grêmio rivals try to generate “nervous atmosphere” at Arena to use pressure | Guild
Next Amidst the uncertainty of the Copa Verde, Remo releases three more athletes