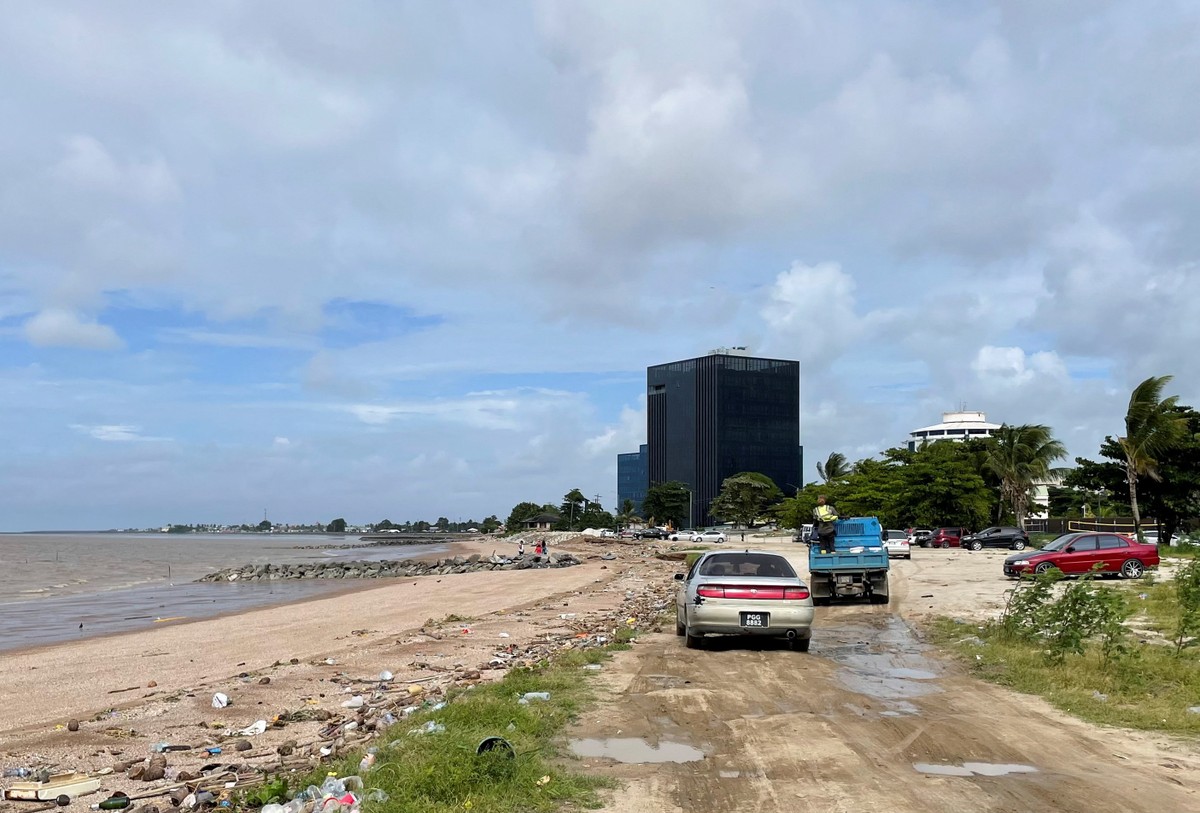 Oil money is flooding Guyana. Who will benefit? | Economy

Ever since ExxonMobil discovered vast oil reserves off the coast of Guyana in 2015, government leaders have promised that black gold would transform the fortunes of one of South America’s poorest countries.

This year alone, Guyana’s economy is expected to grow 48%, the fastest rate on the planet, according to the World Bank. But mismanaged, warn development experts and diplomats, these resources will fuel Guyana’s overheated, race-based politics while adding the country to a long list of “petrostates” whose population has remained poor despite vast resource wealth. .

In May, the government of Guyana announced that it had used for the first time the sovereign wealth fund that holds the royalties paid by oil producers. By the end of the year, withdrawals will exceed $600 million, a number that will soon reach billions.

By 2027, Exxon and its partners, Hess and China’s CNOOC, aim to pump 1.2 million barrels a day from Guyana’s seafloor, making the country by far the world’s largest per capita producer.

“Prepare for a massive stream of government revenue with little experience in how to handle it,” analysts at the US Agency for International Development wrote in a report released earlier this year.

Interviews with more than 30 politicians, businessmen, activists and citizens from across the country showed both the lively aspirations and deep anxieties of a nation on the cusp of radical transformation.

The current government, supported largely by Guyanese of Indian descent, says the oil boom will fund broad development focused on infrastructure and education for the country’s roughly 790,000 people.

“Our commitment as a government is to ensure that opportunities are real across the country, regardless of where you live, regardless of who someone has voted for,” Guyana’s Finance Minister Ashni Singh said in an interview.

But many communities, particularly in areas associated with the Afro-Guyanese opposition, are skeptical. Some complain that money and contracts are already flowing to government supporters and claim the ruling party is installing allies in bodies meant to govern the nation’s new wealth — claims Guyana’s leaders deny.

“What they’re trying to do is use oil for political sponsorship,” said Aubrey Norton, a federal lawmaker and head of the opposition. “There is no vision”.

Hidden between Venezuela and Suriname, politics has long been volatile in Guyana, in part due to competition between its main ethnic groups.

Descendants of African slaves make up about 30% of the population. Another 40% of Guyanese are descendants of contract workers from India. Mestizo and Amerindian peoples largely make up the remainder.

Cityscape view near the Demarara River in Georgetown, capital of Guyana, on May 20, 2022 — Photo: Gram Slattery/Reuters

President Irfaan Ali of the People’s Progressive Party (PPP), linked mainly to the Indo-Guyanese, took power in 2020 after a months-long political stalemate after a disputed election.

In the legislature, the PPP is now in a position to make crucial decisions about the nation’s future thanks to a two-seat advantage over the opposition, led by a group of mostly Afro-Guyanese parties known as the Partnership for National Unity (APNU).

In recent months, the two sides have clashed on all the questions over how the government’s growing accounts should be audited all the way up to key appointments.

But perhaps the most central dispute has been over how to govern the Natural Resources Fund, the sovereign wealth fund that holds Guyana’s oil royalties.

Among the apprehensions of opponents with the current legislation, which took effect this year, is that they do not have the right to appoint representatives to its board. This is a major concern in a country with a history of endemic corruption, they say.

The government calls these concerns unfounded. Singh, the finance minister, told Reuters that a proposal by the previous government, the UNAP, which ran the country from 2015 to 2020, would centralize power in the hands of the ruling party to an even greater degree.

In any case, he argued, the credentials of those appointed to the government council are unquestionable. The opposition counters by saying that this is beside the point. Regardless of any individual’s qualifications, they deserve a seat at the table.

“When everyone is on one side, it sends a message — and that’s that the fund will be politicized,” said Vincent Adams, a former environmental regulator whose opposition nomination to the board was rejected by the government.

In addition to the halls of the National Assembly, Afro-Guyanese communities took to the streets a few times to complain about the government’s allegedly unfair distribution of resources.

In an interview, opposition leader Norton argued that the government’s generous use of cash donations, often run by local bureaucrats, promotes corruption and political favoritism.

The government has consistently denied any bribery and said donation programs are subject to a federal audit. Externally, the government was keen to adopt an inclusive rhetoric.

But the scramble for resources is often more subtle than a battle over bags of cash.

Under the previous government, many state-owned sugar-producing farms were closed or downsized amid falling productivity. This infuriated the Indo-Guyanese community, whose members make up the vast majority of workers on these properties.

Since the government changed hands, the roles have started to reverse, with many Afro-Guyanese complaining that sugar-producing communities are receiving massive investment, while their own neighborhoods are neglected.

The Uitvlugt Estate, west of Georgetown, has lost hundreds of workers to other industries as the old government refused to adjust wages, said its manager Yudhishthira Mana.

But last year, government investment returned. “What’s happening with sugar now, I’ve never seen in my life in terms of a capital injection,” said Mana, a 38-year veteran in the business. He recounted, smiling, a recent visit by President Ali, whose personal residence is nearby.

Fifty miles south, however, in the mostly Afro-Guyanese bauxite mining town of Linden, much of the population is wary.

The government has made significant investments there, including an aggressive effort to pave and resurface the isolated region’s poorly maintained roads.

But many residents suspect that their area is being paid less than it should.

“We are grieving because it looks like Linden is not benefiting like the rest of the country,” said Charles Antigua, a retired miner.

Also fueling the sense of inequality is that most of the country’s top businessmen are Indo-Guyanese, giving their successors a huge advantage in profiting directly from the fast-growing oil sector.

One such entrepreneur, Nazar Mohamed, a port developer, said in an interview that President Ali had asked him if he could add an Afro-Guyanese investor to a planned project near Georgetown, but few had the resources.

Ali’s office did not respond to a request for comment on the alleged order.

“We approached several people,” Mohamed said. “But they didn’t even get money for studies, let alone to build the project.”

Located in South America, Guyana is bathed by the Atlantic Ocean to the north, borders Brazil to the south, Suriname to the east and Venezuela to the west. Guyana is the fourth smallest and only English-speaking country in South America.

The country consists of 10 administrative regions. Georgetown is the capital and is located on the coast. The population, according to the CIA World Fact book, was estimated in 2016 at 735,000, with 90% living on the coast.

Previous iPhone 14 Pro is coming: storage should start at 128 GB (again) | Cell
Next F1 returns at the Belgian GP with definitions at stake; Look! | formula 1