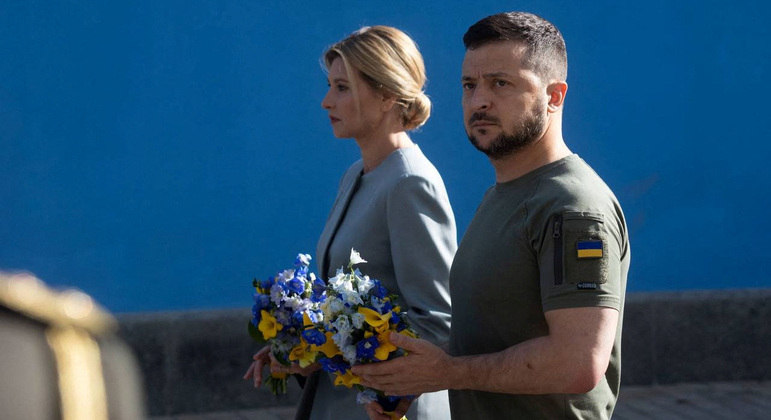 On Wednesday, Ukrainian President Volodmyr Zelensky accused Russia of bombing a train station in central Ukraine. The attack, he said, resulted in the death of 22 people.


The president also promised that his country will fight “to the end”without making any concessions or compromises, in a message for Ukrainian Independence Day, which coincides with the date on which the war turns six months.

“Chaplin’s station [na região de Dnipropetrovsk] is our pain today. At the moment, there are 22 dead, including 5 people who were incinerated in a wagon. A boy died, he was 11 years old. A Russian rocket destroyed his house,” Zelensky said in his daily speech, reviewing a previous balance sheet, which counted 15 dead.

The US Embassy in Kiev warned on Tuesday that Russia intended to intensify the bombing “in the coming days” and urged US citizens to leave Ukraine.

The Ukrainians have been “steadfast for six months,” Zelensky said. “It’s tough, but we’ve clenched our fists and we’re fighting for our destiny,” he added.

“For us, Ukraine is all of Ukraine. All 25 regions, without concessions or compromises”, proclaimed the president, who promised to recover the Donbass basin (east), where Russian troops advance with the support of separatist groups, and the Crimean peninsula, annexed by Moscow in 2014.

In the early hours of the Independence Day celebration, cities such as Kharkiv (northeast) and Zaporizhzhia and Dnipro (centre) were hit by explosions, local authorities said.

Since the retreat of Russian forces from the outskirts of Kiev at the end of March, the main fighting has been concentrated in eastern Ukraine, where Moscow slowly advanced to a phase of stagnation, and in the south, where Ukrainian troops announced a slow counter-offensive. .

Russia invaded Ukraine citing, among other things, the need to defend the self-proclaimed pro-Moscow breakaway republics of Donbass.

But “any attempt to control a sovereign territory of Ukraine will be considered illegitimate,” he added.

The first consultations should be held in Kherson (south) and Kharkiv, in order to annex the two cities to the breakaway territories of Donetsk and Lugansk, both in Donbass, according to US intelligence.

US President Joe Biden announced a new allocation of US$3 billion in military aid to Ukraine, the largest so far.


British Prime Minister Boris Johnson made a surprise visit to Kievwhere it announced a $64 million relief package, including the shipment of 2,000 state-of-the-art drones.

UN Secretary-General António Guterres reiterated his “deep concern” about the military activities around the Ukrainian nuclear plant in Zaporizhzhia (south), occupied by Russian troops, which suffered several bombings that Russians and Ukrainians attribute to the other side. “Any further escalation of the situation could lead to self-destruction,” he warned.

Zelensky told the UN Security Council that Russia “should unconditionally stop all nuclear blackmail” and “completely withdraw” from the plant.

After six months of war that resulted in thousands of deaths, millions of displaced people and great destruction, “celebrate” is not the ideal word for Independence Day in Ukraine.

Kiev authorities have banned any public event from Monday to Thursday in the capital. The governor of the Kharkiv region has ordered a curfew from Tuesday night until Thursday morning.

In Lviv (west), a football match valid for the Ukrainian Championship lasted four hours and 27 minutes (instead of an hour and a half), due to interruptions caused by bombing alert sirens.

In Mikolaiv, a southern city that is critical for its port infrastructure, residents confirm with horror or resignation that they have adapted to the war.

“Not long ago, there was an explosion near me. It’s scary, but what’s really terrible is that you get used to it,” said Eva Gudzon, a 35-year-old photographer and singer.


Russia X Ukraine: who comes out stronger after six months of war?