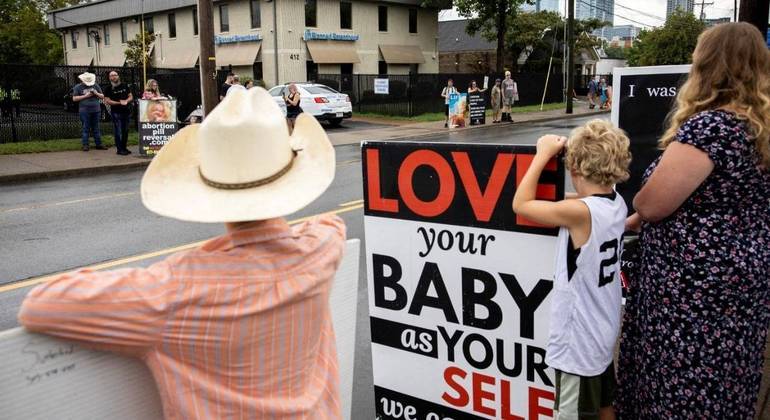 the laws that forbid abortion went into effect this Thursday (25) in three more states in the United States, further restricting access to the procedure two months after the historic decision of the Supreme Court to reverse the right to procedure.

According to The Washington Post, there are today 21 million women, in 13 states, with access to abortion prohibited or very restricted.

Tennessee, Texas and Idaho, ruled by Republicans, joined the dozen states that also implemented laws passed before the highest court’s decision, which were until then inactive.

With six conservative justices among its nine members, the Supreme Court on June 24 overturned the constitutional right to abortion, instituted nearly 50 years ago, and gave each state back the ability to legislate on the issue.

This historic victory for the conservative movement caused a political storm and put the issue at the center of the campaign for the midterm elections, scheduled for November.

Since the annulment of the famous sentence “Roe v. Wade” from 1973, many women who want an abortion have to travel thousands of miles to find a clinic that does the procedure—if they can afford the trip.

In Texas, the law that goes into effect on Thursday even punishes with life imprisonment any member of the medical staff who performs an abortion, except in cases where the mother’s life is at risk.

This rule joins a tangle of restrictive texts that had already led to the de facto end of abortions in this state of 30 million inhabitants.

Also in the south of the country, in Tennessee, where termination of pregnancy was prohibited after six weeks, anyone who performs an abortion can be sentenced to prison.

In both states, there are no exceptions in cases of rape or incest, and observers believe the legislation is unclear on the case for an intervention to save the mother.

In Idaho, northwest of the country, the new text establishes a penalty of two to five years in prison for anyone who performs the procedure, with the exception of rape or incest.

A federal judge blocked part of that law Wednesday night, and the state will not be able to sue doctors who perform an abortion to protect a woman’s health.

The day before, a reverse court ruling had been adopted in Texas, which illustrates the confusion surrounding the legal battles that are multiplying across the US.

In the long term, about 50% of the country’s states, especially those in the center and south, conservative and religious, may ban or strongly restrict abortion.

In Indiana, such a law will take effect on September 15. On the other hand, states ruled by Democrats seek to become “sanctuaries” of abortion rights.

President Joe Biden has made the defense of access to abortion one of his campaign themes to mobilize his electoral base, in particular women, in the face of the November elections, which threaten his fragile majority in Congress.

Two recent victories have given hope to the Democratic camp. In early August, voters in Kansas, a traditionally right-wing state, voted to uphold the constitutional guarantee of abortion.

And on Tuesday, a Democrat who campaigned for abortion rights won against his Republican opponent in the election of a hotly contested New York state district.

Previous Amazon bought EA: the announcement will come today, according to a rumor
Next TudoTV: 10 movies and series about politics on Netflix, Prime Video and HBO Max