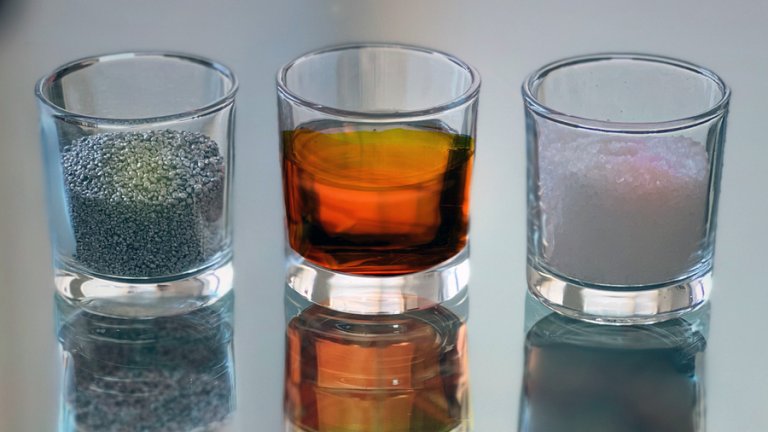 Aluminum-sulfur battery recharges in less than a minute

The three primary components of the battery are, from left to right: aluminum, sulfur and rock salt crystals.
[Imagem: Rebecca Miller]

Liquid batteries, or flow batteries, can solve the problem of intermittent renewable energies, such as wind and solar, storing energy in chemical compounds, reversing the process at night or when the winds are weak.

The challenge has been to find chemical compounds that allow this to be done in a way that simultaneously meets the criteria of technical feasibility and economic feasibility.

In this attempt, an international team (Canada, China and the USA) decided to reverse the traditional way in which research on new batteries is carried out: Instead of researching the most efficient compounds in energy storage and then trying to lower costs, Quanquan Pang and his colleagues took the cheapest elements and began to see the best they could do with them.

The cheapest of all no-metals is sulfur, so it has become the preferred material for the second electrode.

It remained to decide then what to put as electrolyte, the material to place between the two electrodes to transport ions back and forth during the charging and discharging of the battery.

The team tested a few polymers, but eventually turned their attention to a variety of molten salts, which have relatively low melting points – close to the boiling point of water, as opposed to over 500°C for many salts. A lower temperature makes everything cheaper because it eliminates the need for special thermal insulation and anti-corrosion measures.

In addition to building a cheap battery, the team found that their battery performed better than they had expected.

The first prototypes endured hundreds of charge and discharge cycles – reaching the thousands is important for commercial viability – and achieved a surprisingly high recharging speed, reaching full charge in less than a minute – the charging rate is highly dependent on the temperature of work, with recharging at 110°C being 25 times faster than at 25°C.

This recharging speed was made possible by an unexpected advantage offered by the molten salt the team chose as the electrolyte. One of the biggest problems in battery reliability is the formation of dendrites, which are thin metal spikes that build up on one electrode, eventually growing until they come in contact with the other electrode, causing a short circuit. But this particular salt, thanks to its low melting point, is very good at preventing this malfunction.

Furthermore, the battery does not require any external heat source to maintain its operating temperature: Heat is naturally produced electrochemically by charging and discharging the battery.

This new battery formulation is ideal for installations of the size needed to power a single home or a small to medium-sized business, producing on the order of a few tens of kilowatt-hours. For larger installations, ranging from tens to hundreds of megawatt-hours, the team is still betting on another technology, the liquid metal batteries that they created themselves a few years ago and that they hope to put on the market next year.

The smaller scale of aluminum-sulfur batteries can also make them practical for use as charging stations for electric vehicles. That’s why the team is also already trying to raise funds to make its commercialization viable.