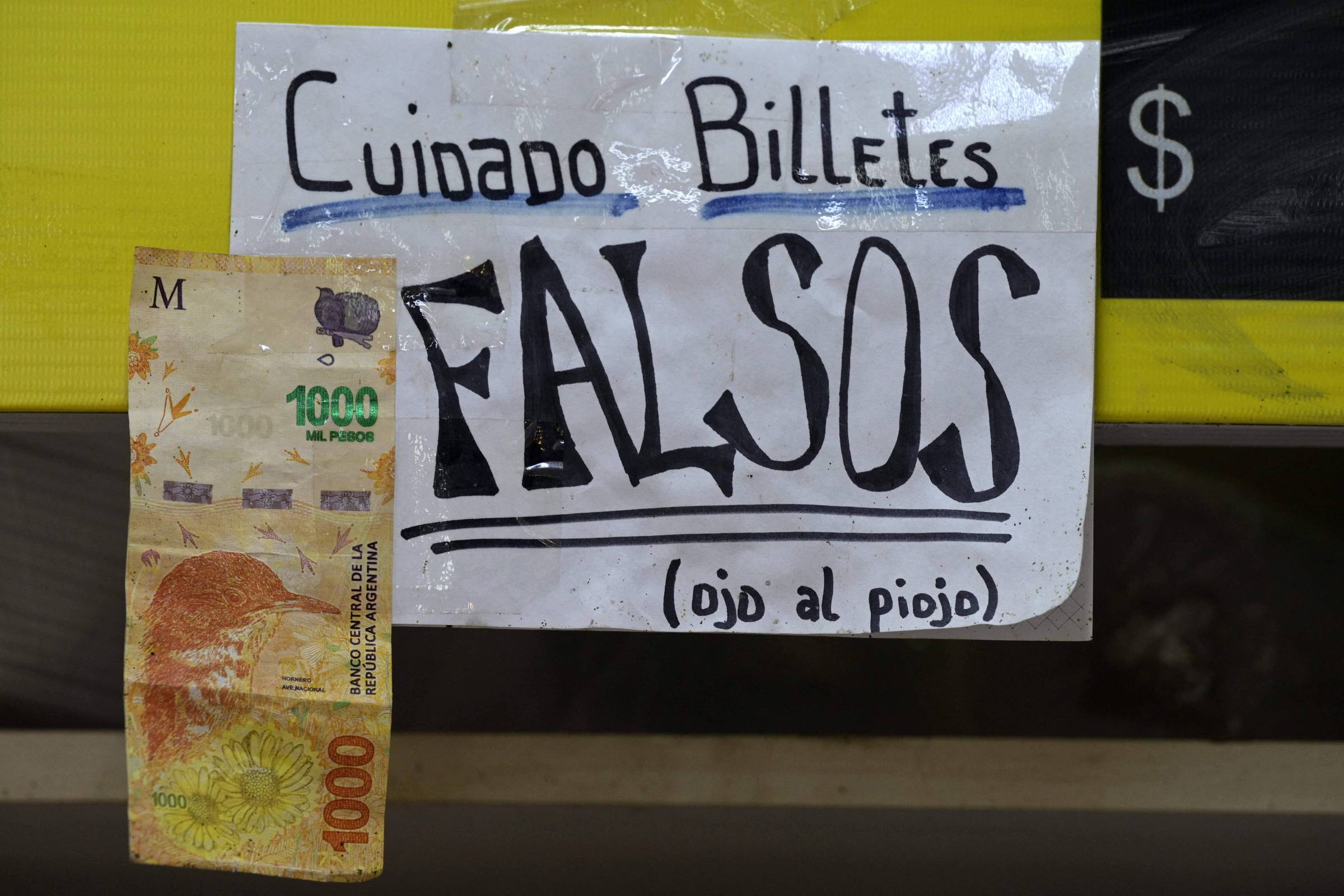 The Bolivian TV presenter shows in a didactic way. In one hand he has 100 Argentine pesos, in the other 230 Bolivians. “That’s what 100 Argentine pesos cost in 2009.” Then, he shows what that equivalence would be like today. For that, he doesn’t even need banknotes anymore, he opens his purse and says: “To buy 100 Argentine pesos today I need 1 boliviano and 50 cents”.

The video has gone viral on networks and on local TVs in recent weeks, when the Argentine currency has been devaluing against inflation of 70% in the last 12 months – with a projection of 90% for December.

Historically, Argentines have cultivated the tradition of keeping dollars at home, due to hyperinflations and the trauma caused by the “corralito”, in the 2001-02 crisis, which caused distrust in banks to be implemented in society. The culture of the “mattress bank” was established, that is, keeping money at home, if not inside the mattress, in safes, secret drawers and other hiding places. As long as it’s in US currency.

Dollars, however, are harder to come by, since, in 2018, the government of Mauricio Macri limited purchases of foreign currency to US$ 200 per month, per person, at the official value. As a result, the huge gap between the value of the official dollar (136 pesos) and that of the parallel dollar (295 pesos) widened.

As access to the dollar is restricted to those who can travel and bring paper money from abroad or pay this high amount in pesos for the US currency on the parallel market — fewer and fewer people, in a country where 44% of the population is under poverty line — the search for more stable currencies in the region became common.

Bolivian is one of them. After all, the Andean country has the lowest inflation in the region, at 1.2% per year. In the border region between the two countries, it is very common for Argentine traders to sell their products, often wholesale, to Bolivians, and keep the currency of the neighboring country, which does not depreciate as quickly as the Argentine peso. Another common practice is to keep Uruguayan pesos. Historically less valuable than the Argentine peso, the Uruguayan has already surpassed its value against the dollar. Uruguayan inflation is high, at 9.37%, but not close to Argentina.

Uruguay has also become the place where most Argentines who receive money from abroad have accounts. After all, receiving any foreign transfer in Argentina, in whatever currency, is to lose more than half of its value, since banking transactions are carried out by converting currencies to the official dollar. Thus, the money arrives in pesos converted to the official value, and paying the bank fees.

Hence the common practice of opening an account in dollars in Uruguay, a country that allows this resource by foreigners at low cost. The only drawback is that every time you need to withdraw money, you have to take a boat to Colônia, the nearest city, and return to Buenos Aires. This “bank tourism” is very common, which takes place daily between the river stations of the two countries.

To use these coins on a daily basis, the exchange is carried out in the clandestine “cuevas”, stores that operate illegally, although their addresses are known, or by the so-called “arbolitos” (so known because they usually carry dollars, that is, banknotes ” greens”). These can be parked on shopping streets or near hotels, where they offer a less favorable exchange rate and risk delivering counterfeit peso bills. There are those who do the service at home, the “arbolitos delivery”. In the “cuevas”, the exchange rate is better, but even so, the Argentines have changed little on a daily basis.

“The ideal for the middle class is to accumulate as much foreign currency as possible and only exchange it for pesos when it’s time to spend it, because you exchange it on Monday, and on Friday that currency is already worth less”, says Giovani (didn’t want to give surname) who operates a “cueva” in Palermo.

The peso being worth less is also reflected, paradoxically, in an increase in consumption, even with high inflation. “If there’s something left over and it’s not enough to buy dollars to keep, we spend it, it’s eating out, it’s a weekend trip, it’s a gift for the kids. Anything but keeping paper money in pesos in hand”, says Angelina Suárez, 45, who was shopping at a market in Núñez earlier this week. That’s why the night of Buenos Aires is buzzing and the restaurants are full, especially after the cases of covid have dropped and restrictions have fallen.

Merchants prefer not to receive by credit card. In general, there are tables with the two different values ​​already on the door of the establishment. If the customer pays in cash, there is a discount. “Between the day of purchase and the day they actually pay me, I lose money, so I charge a discount on the spot if they pay in cash,” says Pablo Almeyda, owner of a bookstore in Villa Crespo.

The purchase of pesos in paper money is also difficult, it is necessary to make an appointment at banks or exchange offices. The reason is that it is increasingly difficult to deliver in cash the amount of bills equivalent to US$ 50 or US$ 100. Heavy coins quickly disappear from the wallet with the high cost of food, medicine or transport.

There are also restrictions regarding the age and value of dollar bills. In illegal money changers, or even in transactions that are carried out in dollars in Argentina, such as the purchase of apartments, the so-called “cabecinha” dollars, that is, old banknotes, in which the image of Benjamin Franklin appears smaller than in the new ones, the so-called “head dollar”. For less valuable bills, such as $50 and $20, you also pay less than their value. Everyone prefers the US$ 100 ones, preferably with a big head.

There is also a problem with the denomination of the notes. Today, the highest value in circulation is 1,000 Argentine pesos, which is equivalent to US$ 8. This makes it difficult to maintain ATMs with cash. The maximum that can be withdrawn per day is 10 thousand pesos (US$ 72), little for larger expenses, such as a medical appointment, an emergency expense. The amount of low-value bills causes ATMs to crash all the time.

If the use of credit cards is not popular, debit cards have become more used, especially during the pandemic. Even so, they are cards operated with little money. People, in general, carry the accounts in pesos every week or every 20 days, just for daily expenses, and generally continue to keep the bulk of their investments at home.

Even with the introduction of these virtual payment methods, there is about 40% of the GDP that work in a clandestine way (“en negro”).

The entry of ride-hailing apps into the country is still illegal, but tolerated. It is very common, however, for the customer to have the trip canceled when he realizes that the payment method will be by credit card.

The arrival of Sergio Massa in the new “super-ministry” of the economy meant, among other things, the end of the so-called “plata plans”, or “money plans”, which were distributed to the population that could not work due to the restrictions of the pandemic, but that meant an unprecedented printing of money. As this is seen by Massa as one of the engines of inflation, the issuance of more paper money, for now, is suspended.