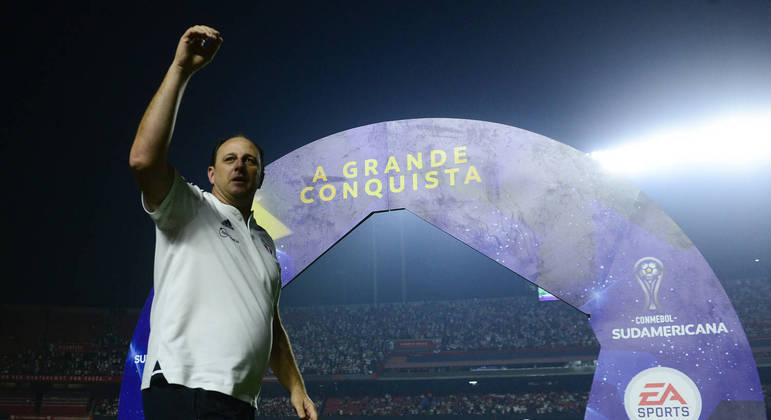 Ceni assumes: São Paulo’s potential is to win the Sudamericana. The Copa do Brasil, after losing to Flamengo, became unreal – Prisma


Rogério Ceni has six titles as a coach.


Three for Fortaleza and three for Flamengo.


As a player, he had 18 conquests for São Paulo, a record holder.


Nobody won more than him with the tricolor shirt.

In two and a half years, adding the two passages, he never won a championship as coach of São Paulo.

The final lost to Palmeiras, in the decision of Paulista this year, is still bothering.

When he outlined the plans for the 2022 season with President Julio Casares and coordinator Muricy Ramalho, Ceni knew that the “easier” title was Paulista. Because rivals are focused on Libertadores. Santos, with enormous financial difficulties, and a limited squad would also have the Sudamericana.

The Copa do Brasil would depend on the draw of the opponents.

At the Brazilian, the focus has always been on qualifying for the Libertadores. No chance of conquest.

Ceni knows that São Paulo owes more than R$ 700 million and that they need an important title. For the club and for your career.

The two from Ceará, Série B and Copa do Nordeste are excellent for an emerging club. And the Brazilian, the Supercopa do Brasil and Carioca were accredited to the Flamengo squad.

Now, in São Paulo, no. The dispute, and eventual conquest, of titles with great reach, the merits would go to the coach, who assembled the team and defined the way to play in the middle of the financial crisis of Morumbi.

As the biggest idol, he knows how much the Copa Sudamericana has become a priority. Even more so after yesterday’s defeat to Flamengo, by an elastic score, 3 to 1. The turnaround, with his team winning by three or more goals at Maracanã, is almost impossible.


“It’s important for fans to be here (at Morumbi) in the next games as they were here today, encourage us. We’re going to spend the cartridge in these last two games to try for this title, try to spend this cartridge in the Copa Sudamericana.”

Rogério Ceni is fully aware that it is very possible to win, eliminate Atlético Goianiense and reach the final of the international tournament. And still beat the finalist, who will come out of the dispute between Melgar, from Peru, and Independiente del Valle, from Ecuador.

The title would already classify São Paulo for the 2023 Libertadores.

And in the group stage.

What would make the last games of the Brazilian a mere preparation for next year’s competition.

The rematch for Flamengo, in the Copa do Brasil, has already come to be seen as a game in which São Paulo will be a sniper. Without the weight of responsibility, of the obligation to win. Because Ceni knows how much better the squad of the Carioca team is than yours.

The coach has already started to focus completely on the Sudamericana. He demanded that the board lower the price of tickets for the semifinal against Atlético Goianiense, on September 8. He wants Morumbi with more than 60 thousand people, 10 thousand more than yesterday, against Flamengo.

Casares has already accepted and the price will be lowered.

The coach’s part will be to prepare the team for the first confrontation, on September 1, in Goiânia.

There is a real chance that he will save important athletes against Fortaleza, on Sunday, at Morumbi.

He knows that São Paulo is just six points away from the relegation zone in the Brazilian. But at the moment, he has no other option.

Despite the 3-1 defeat to Flamengo, Rogério Ceni believes his players left more confident. conscious. Because if they managed to corner the most technical team in Brazil, eliminating Atlético Goianiense is completely viable.

At 49, Ceni wants to win his first title as coach of the club where he is the greatest idol in history. It is a mission that has imposed itself, in this second time as football commander in Morumbi.

The work will be steady.

But São Paulo will fully prioritize, until the 8th of September, the South American.

Reaching the final of the Copa do Brasil is an almost unreal situation.

In the Brazilian, in 12th place, the focus is to add points.

To fight for a spot in Libertadores.

If the Cups go wrong, there’s still the points classification.

Six will be classified in the Brazilian.

The top four in the group stage.

And two in the knockout stages, the “pre-Libertadores”.


Back to Brazil: remember everything Luva de Pedreiro did during his time in Europe

Previous Seer hits the hammer and nailes Grêmio’s fate against Ituano
Next Rooster: Hulk talks about 15 finals in the Brazilian and cites conversation with organized