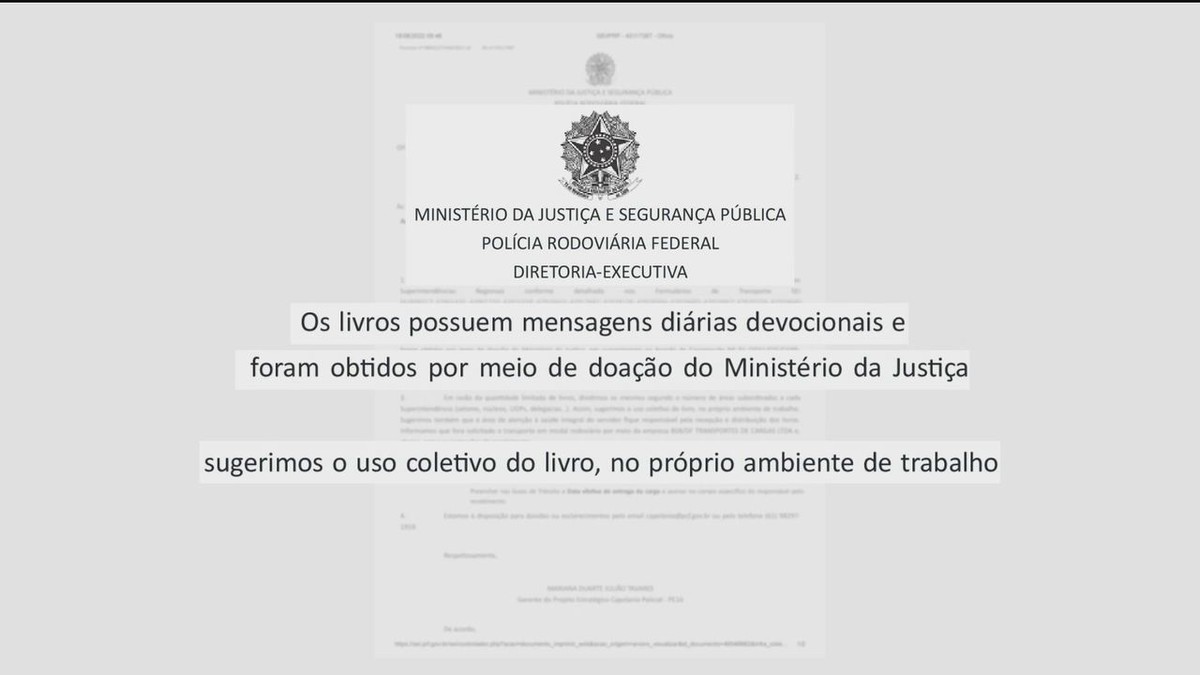 The government of President Jair Bolsonaro decided to distribute books to the Federal Highway Police (PRF) with a recommendation to servers to read the Bible. To GloboNews, corporate employees reported discomfort with the attitude, assessing that the government should not mix religion and work.

In a message sent to the servers, the PRF treated the distribution of the books as a “spiritual assistance” for the servers.

Book distributed to PRF servers with a recommendation to read the Bible — Photo: Reproduction

When contacted, the Federal Highway Police stated that it did not file complaints with the Ombudsman about the distribution of books (read details further below).

The Ministry of Justice justifies the distribution to “comprehensive health care for police officers” because of the stress of the activity. The folder endorsed actions to encourage religiosity in meetings and from the distribution of books to managers.

Globonews had access to the government’s “faith project” documents. The orientation is to distribute the books to all PRF state superintendencies, recommending daily prayers.

According to the government’s guidance, the books are part of the Chaplaincy project and bring “daily devotional messages”.

“Stimulating spirituality, contributing to the well-being and quality of life of the PRF server, improving their performance in daily activities”, says an excerpt.

“We suggest the collective use of the book, in the work environment”, adds the document.

Agents reported to Globonews “embarrassment” with the arrival of these books.

To GloboNews, servers reported discomfort with the presence of religiosity in the work environment, which occurs “unjustifiably” in the evaluation of these servers and which can translate into “violation of religious freedom”, since all religions are not covered.

Servers say, even though the issue is “delicate” and “generates embarrassment” because, despite not being mandatory, the book distribution project “stimulates the exercise of faith in the work environment, two things that should not mix”.

Sought by GloboNews, the Federal Highway Police reported that there are no complaints registered with the agency’s Ombudsman about the project.

Regarding the fact that the project did not include other religions, the PRF said that, if there are servers interested in activities, they need to submit a request.

“The activities of religions not formally represented – not only those of African origin, but also Buddhists, Hindus, Muslims, among others – can be carried out within the scope of the Institution, upon request of the interested servers and demand that justifies them, being up to the responsible server for the management of the PRF Chaplaincy to make contact with the religious ministers of the requesting creeds viable”, replied the agency.

The PRF also informed that there was no expenditure of public money and that the project does not oblige anyone to participate.

Listen to the podcast episode The subject on “The Electoral Exploitation of Faith”: