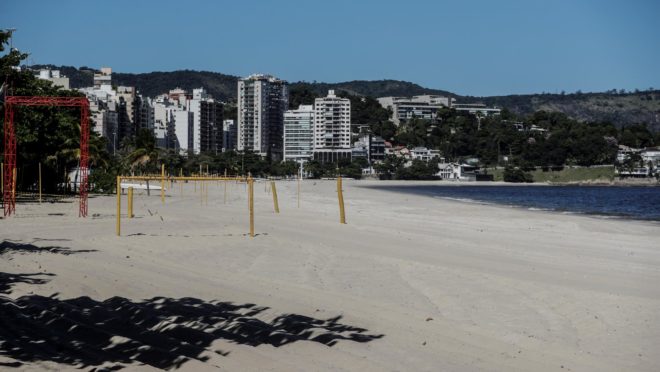 Yes, there was a lockdown in Brazil. And it didn’t help contain the pandemic

The interview with President Jair Bolsonaro in Jornal Nacional brought up the topic of lockdowns: the measures of closure and confinement in the Covid-19 pandemic. He was contested by journalists and influencers, who claim that there was no lockdown in Brazil. In addition to the historical facts about the existence of lockdowns, there was also a debate about how rigorous they were, whether they were mandatory measures by governments, whether citizens obeyed, and whether they were effective in containing the spread of the virus.

The clearest case of lockdown was that of Araraquara, for ten days from February 21, 2021. The municipality only allowed the opening of pharmacies and health units. Food was delivered by supermarkets. The streets were patrolled and a woman was even arrested in a square – she invoked her constitutional rights but was taken by force. The mayor, Edinho Silva (PT) repeated the dose in another eight-day lockdown in June of that year.

There is no single definition of lockdown. The specialized literature talks about non-drug interventions, and a set of them, in whole or in part, can correspond to what is called a lockdown in political debate and social networks. A proposal for categorizing these interventions is in an article published in 2020 in the journal science first authored by Jan Brauner of the Theoretical and Applied Machine Learning Group at the University of Oxford. Researchers from 18 other institutions are co-authors.

Brauner and colleagues were already working in the context of the pandemic. They proposed eight interventions that make up the lockdown, organized into three large groups: Prohibition of gatherings larger than 10 people, 100 people, or 1000 people (includes some meanings of social distancing); closing schools, universities, some types of non-essential business establishments, or most businesses; isolation or home confinement orders (including quarantine).

The Araraquara case fulfills all these criteria, as do the interventions in Wuhan at the beginning of the pandemic and in Shanghai this year, both in China.

In Brazil, the president sanctioned Law 13,979 in February 2020, which enforced a state of public health emergency across the country. The law nominally provided for isolation and quarantine, required citizens to inform health authorities if they came into contact with the coronavirus or traveled through contaminated regions, did not mention restrictions on agglomerations, but was broad enough to allow lockdowns across the country or by local authorities. . The Ministry of Health did not use the law to establish interventions that could be called a lockdown across the country, but local authorities applied it in this sense.

Measures from local authorities in 2020

Maranhão was the first state to implement such measures, on May 5, 2020, for 12 days, in four municipalities in the Maranhão Island Region, including the capital São Luís. The governor determined, by stimulus of a judicial decision, the closing of schools and non-essential commerce, prohibition of all types of agglomeration including in private space, mandatory masks, and restriction of the movement of citizens. At least in the letter of the decision, the Oxford criteria for lockdown were satisfied.

Following Maranhão, similar measures were implemented in nine other states: Amapá (16 municipalities), Amazonas (Barreirinha), Ceará (Fortaleza), Mato Grosso do Sul (Guia Lopes da Laguna), Pará (21 municipalities), Paraíba (12) , Pernambuco (eight), Rio de Janeiro (three) and Tocantins (32). All these lockdowns were carried out in May and June 2020. Another seven municipalities implemented less restrictive measures during this period that would not fit the definition of lockdown, the largest being the city of Rio de Janeiro.

Once again implemented by local authorities generally not aligned with the federal government, measures that may fit the Oxford definition of a lockdown took place in 14 states of the federation in the year 2021.

The Federal District and 11 other municipalities across the country implemented stricter measures less consistent with the complete lockdown. Brasília had one of the longest, for almost the entire month of March. Most measures in 2021 took place in February and March. A few were made in April and May. Only Araraquara repeated a lockdown in June.

The report did not assess the policies of all municipalities in detail, the similarity or dissimilarity to the lockdown as defined by the Oxford researchers was suggested in general lines by the level of isolation enacted.

In the 2020 article, Brauner and colleagues suggest that, broadly speaking, the lockdown works especially in the part of closing schools and universities. However, as shown by People’s Gazette in December last year, this conclusion is contradicted by a Japanese study.

The matter is simply too complex to have all the confounding factors dissipated to point to a specific effect. In the face of scientific uncertainty, it is natural for people to fill in the gaps with their political convictions. Ideologies that emphasize caring for the vulnerable and avoiding harm will tend to argue that more restrictions could have saved lives. Ideologies that are skeptical of interference with people’s way of life, of the ability of scientific hypotheses to supplant common-sense wisdom, and those that emphasize freedom will tend to accuse the interveners of killing more and imposing unacceptable costs on communities and to individuals.

It is noteworthy, as experienced science journalist John Tierney has commented, that many of the public health bodies around the world that previously rejected draconian measures like the lockdown suddenly changed their position when the first outbreaks of Covid-19 emerged. Furthermore, Sweden, which rejected these measures, was not a case of tragedy in the pandemic, it was below the average mortality in Europe, and in the context of Scandinavia it was at least an ambiguous case. Their educational indicators remained positive, contrary to what happened in most countries that adopted total or halved lockdowns, which in addition to having educational losses, observed cognitive, verbal and athletic difficulties in their children.

China declared its 2020 lockdown of Wuhan, the epicenter of the pandemic, a success. Apart from the fact that this dictatorship often manipulates data to improve its image in the world, it is possible that dictatorial controls could have some effect. In the case of an airborne virus, the effect is temporary. The Covid Zero policy, attempted elsewhere such as Australia, was declared unsustainable by the World Health Organization (WHO) this year. Annoyed, the communist dictatorship censored the WHO director-general’s comments and retorted, calling the entity irresponsible.

Since the first outbreaks, when obesity proved to be a major comorbidity, confinement policies — which end up encouraging more sedentary lifestyles and overweight — have been in conflict with this fact, although this conflict has rarely been recognized. A study of more than 7,000 people revealed that between February and June 2020, they each gained an average of 680 grams more per month. A policy that causes an aggravating factor to the very disease it seeks to combat seems counterproductive.

In April 2022, three economists, led by Casey Mulligan of the University of Chicago’s Department of Economics, published a major analysis of the effects of lockdowns on the varied policies of the 50 US states. One of the main findings is that the costs imposed by lockdowns (which not even advocates deny exist) were not correlated with better health outcomes, including mortality. There was a small negative effect of keeping schools open, which, as stated, is inconsistent in the literature — the authors themselves do not believe this is a causal relationship.

The educational losses were catastrophic: economists cite another study that calculated a loss of 13.8 million years of human life. The Organization for Economic Co-operation and Development has calculated that four months of long-term lack of school learning will cost $14 trillion. In addition, educational losses caused by school closures in the pandemic should correspond to a 3% lower lifetime income.

Previous Are you in CADUNIC? See how to get access to FREE 5G
Next Does the Fantastic Four already have a director? The Chosen One was responsible for Marvel’s smash hit – Movie News