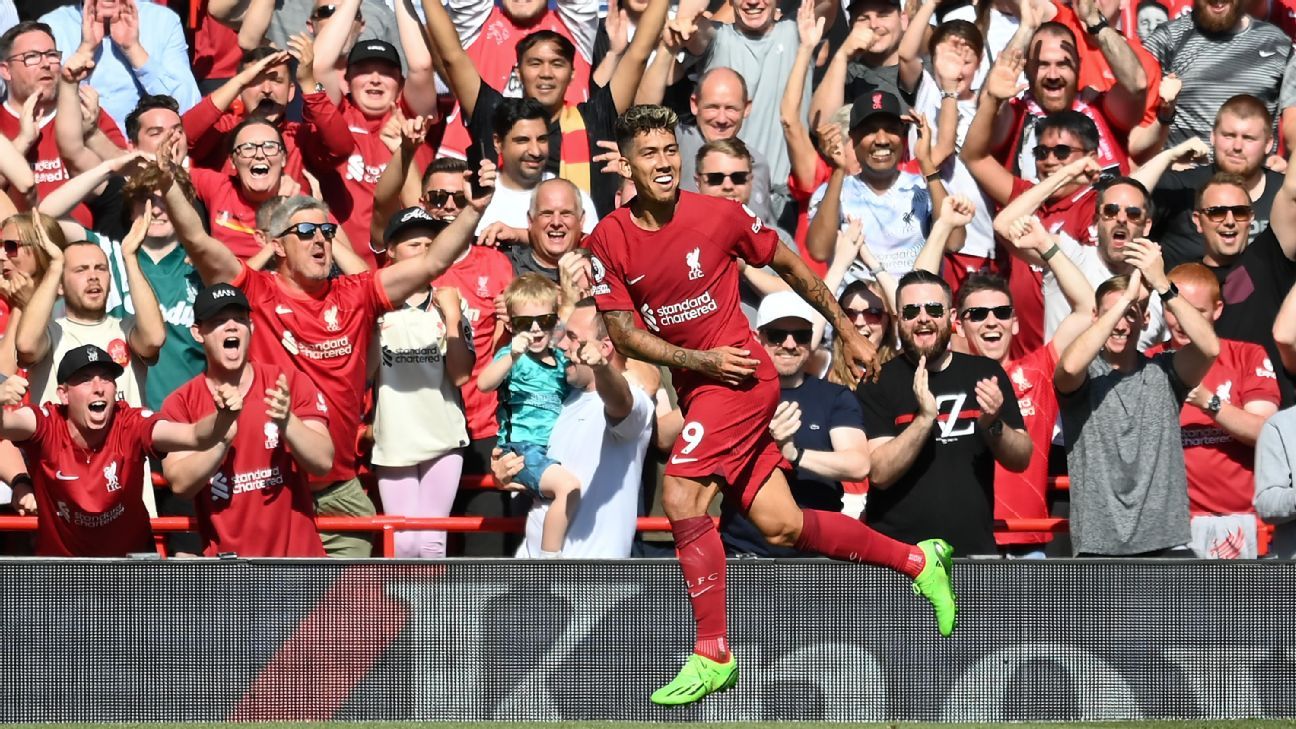 Moving the fourth round of Premier League of the current season, the Liverpool took no notice and won the bournemouth 9-0, this Saturday (27), playing at Anfield. The goals were scored by Luis Díaz (2x), Elliott, Alexander-Arnold, Firmino (2x), Vin Dijk, Mepham (own) and Fábio Carvalho. The rout is the biggest in Premier League history at Liverpool’s stadium.

With the triumph, Liverpool reached five points and is in tenth place in the Premier League and continues to seek rehabilitation. Bournemouth has three and is in 16th place.

Overwhelming. That was the start of Liverpool’s game. Playing in their own way, Klopp’s team needed five minutes to make it 2-0 in the game. First, after two minutes, Luis Díaz took advantage of a beautiful cross from Firmino and headed it into the back of the goal.

Then, at five, Firmino fixed it and Elliott took it from outside the area to make it 2-0.

Even with the advantage on the scoreboard, Liverpool continued on top of the opponent and began to miss clear chances to score. In the 16th minute, after a beautiful collective move down the left, Firmino back-heeled, Elliott arrived with a cross and Salah missed the chance of a third free-kick at the second post.

With so much pressure, Liverpool scored again. In the 27th minute, Alexander-Arnold scored with Firmino, took a risk from the middle of the street and scored a great goal to make the 3-0.

Three minutes later, Klopp’s team turned the score into a rout. After Salah’s move from the right, the ball deflected in the marking and Firmino took the opportunity to score his first goal of the match after three assists.

In the final stretch of the first half, Liverpool scored one more. Taking advantage of Henderson’s corner, Van Dijk went higher than the defense and placed it in the back of the goal.

The second half started and the hosts scored again in the first minute. After a cross from the right, Mepham played against his own goal and made it 6-0.

In the remainder of the second stage, Klopp’s team went on to do a luxury training session and, even so, scored once again. After a hit and hit in the area, Firmino took the leftover with the open goal and made it 7 to 0.

In the final minutes, the hosts scored one more. After Alexandrer-Arnold’s throw, Tsimikas managed and Fábio Carvalho submitted a cross to make it eighth.

In the 40th minute, Liverpool scored one more. After a corner kick, Luis Díaz appeared at the crossbar to score his second and the hosts’ ninth. The rout is the biggest ever to take place at Anfield in Premier League history.

Bournemouth are in 16th place with just three points won after four rounds.

Owner of the first half, Roberto Firmino got three assists and a goal in 30 minutes of the match. In the second stage, the Brazilian scored again and ended up participating in five of the team’s nine goals.

Inoperative in the first half, Bournemouth was a mere spectator in the first half of the game, conceding four goals in less than 30 minutes. In the second stage, the dominance was maintained and the rout only increased.

Liverpool return to the field next Wednesday (31), for the Premier League, when they host Newcastle.

Bournemouth will face Wolverhampton at their stadium on the same date.