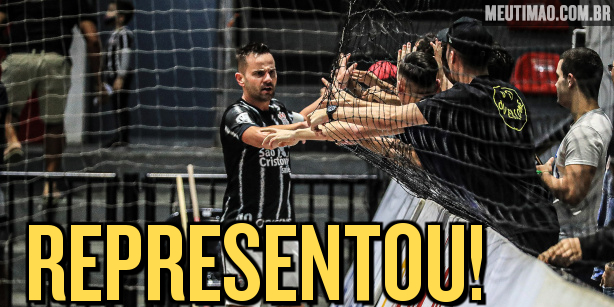 remember the Corinthians campaign in the title of Paulisto de Futsal

This Friday, Corinthians drew with Magnus Sorocaba for 3 to 3, at the Wlamir Marques Gym, in São Jorge Park. With the result, Timão won the Paulista Futsal Championship.

Undefeated, the team coached by Deividy Hadson had an outstanding campaign in the state competition. Corinthians won all the matches of the first phase, collected routs in the tournament and ended the Paulista de Futsal with the top scorer of the competition.

Corinthians won the Campeonato Paulista de Futsal without losing a match. In total, Timão played 12 games, won ten times and tied on two occasions. In the first phase, the alvinegro club won all the matches they played.

In the quarterfinals, the alvinegro club eliminated AABB with two wins. In the first leg, Corinthians beat the opponent 3-2, playing as a visitor. At Ginásio Wlamir Marques, Timão secured a spot in the semifinals after winning 5-1.

In the semis, a traditional opponent: Juventus. The club in Mooca, a neighborhood in São Paulo, was the rival in the dispute for a spot for the big decision. Corinthians won both matches, the first leg by 3-0, playing as a visitor, and the return by 8-2, at Parque São Jorge.

In the big decision, the alvinegro club faced a classic against Magnus Sorocaba. For having a better campaign in the first phase, Timão decided the final playing at the Wlamir Marques Gym, in Parque São Jorge.

In the first leg, in the interior of São Paulo, Corinthians won a tie in the race. Magnus Sorocaba was winning the game 1-0 until the second half, when Deives scored and left the score equal. In the big decision, at Ginásio Wlamir Marques, Timão drew 3-3 and secured the title undefeated.

Corinthians’ campaign to the title was marked by many goals. Corinthians scored 29 goals in 12 matches in the competition. Of these offensive numbers, 15 goals were scored by Deives who finished as top scorer in the Campeonato Paulista de Futsal.

In the first phase, shirt 10 scored five goals. In the quarterfinals, Deives also left his mark, the player was responsible for another five goals in the 3-2 and 5-1 victories against AABB in the clashes that ensured the alvinegro club in the semifinals.

In the semifinals against Juventus, Deives was responsible for being Corinth’s top scorer in the decisive clashes. The number 10 scored three goals in the duels against Mooca’s opponent. At the time, Timão won by 3 to 0 acting as a visitor in the first game and thrashed by 8 to 2 in the return match, at Ginásio Wlamir Marques.

In the big decision against Magnus Sorocaba, Deives was responsible for an important goal in the first leg of the final. Acting in the interior of São Paulo, the alvinegro club was being defeated until the end of the second half, when the shirt scored and tied the duel.

In the return match of the Paulista Futsal Championship final, Deives scored one of Corinthians’ goals in the game. The confrontation was tied by 2 to 2, in the second half, when the pivot scored his last goal in the competition. The number 10 finished under Djony’s legs and secured the title for the white-and-white club.

See more at: Futsal do Corinthians, More sports from Corinthians and Campeonato Paulista.