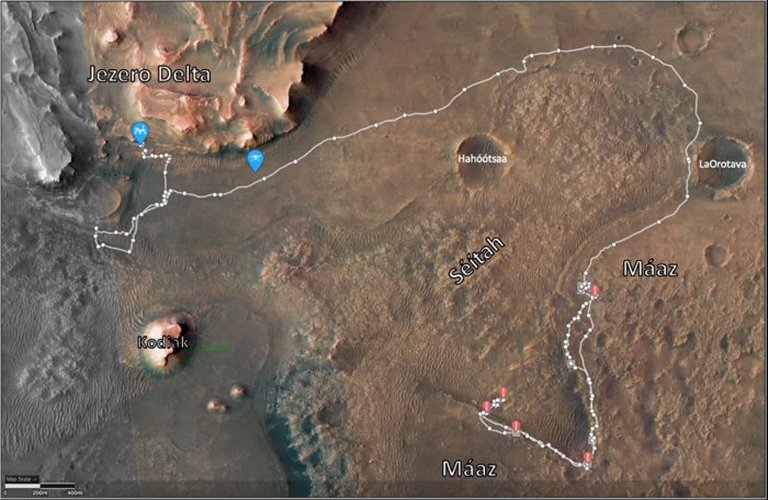 Rocks from Mars that would reveal water have not been found

The Jezero Crater was chosen as a landing site precisely because it is next to a formation that resembles the delta of an ancient river, through which many sediments must have passed.
[Imagem: NASA]

After carefully selecting an area where the Perseverana robot could pick up signals from the ancient oceans of Mars, scientists are having to return to drawing boards in search of alternative explanations.

The mission team has just announced a surprising and unexpected discovery about the geological composition of Jezero Crater, which the rover has been studying since last year.

The data show that the crater is largely composed of gnea rocks, not sedimentary rocks.

Everything indicates that Jezero Crater contained water billions of years ago. For this reason, scientists predicted that the rocks in the area would be sedimentary, formed over time from the sedimentation of mud and debris, as happens in lake beds on Earth. And sedimentary rocks are great for preserving ancient signs of life.

But to everyone’s surprise, the rock at Jezero is gneous, formed by volcanic magma.

Volcanism, in deposition by sedimentation

The gneiss rocks studied by the rover are mostly made of coarse-grained olivine (a gneite mineral), indicating that they formed during the slow cooling of a thick layer of magma – the composition of the rock similar to some Martian meteorites found on Earth.

Another team analyzed a continuous radar scan captured by the rover during its initial 3-kilometer journey, revealing the crater’s rock stratigraphy and electromagnetic properties at a depth of about 15 meters below the surface. The data indicate that the layered structure below the crater floor reflects a history of gneous activity, although there also appear to be clues that could be interpreted as generated by repeated exposure to liquid water.

A third instrument, which carried out remote sensing during the first 286 days of the mission, revealed volcanic terrain with layers of rock stratified below the surface by density and composition. The lower stratigraphic rock layers are richer in pyroxonium, and the lowest observed layer is rich in olivine.

These results practically rule out the long-awaited detection of ancient signs of microbial life in this very promising place on Mars, which are typically conserved in sedimentary rocks. And there is less interest in the project to collect the samples that the Perseverana robot is preparing for a future mission.

The consoling finding is that genesis rocks are easier to date than sedimentary rocks, so that it will be possible to more accurately establish the time window for when Mars may have had water.

“Finding these igneous rocks in an ancient lake bed on Mars was a big surprise. One would expect lake bed sediments, but this shows that the history of Mars is more complicated than expected, including lava flows at this ancient site. ,” said Roger Wiens, the instrument’s chief scientist. supercam

The SuperCam uses a focused infrared laser beam to remove dust and material from rock surfaces, a technique called laser-induced rupture spectroscopy. The burst of energy from each five-nanosecond pulse creates a flash, and the optical spectrum (specific colors) of that glow reveals the elemental chemistry of targets up to about eight meters away.

Previous Dorival has used nine different defenders at Flamengo; David Luiz is the one who acted the most | statistical spy
Next Maria Beltrão says she laughed in the Pope’s face when she heard an unusual question: ‘I got into hysterical mode’ | TV & Famous