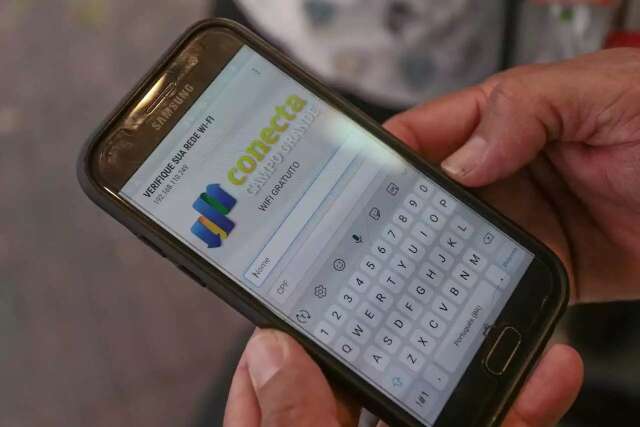 5G technology is coming, after 27 years of struggle for the internet to arrive

History is a long one, since entrepreneurs guaranteed dial-up access in the 1990s

Campo Grande is currently experiencing great expectations for 5G, which promises to improve the internet experience. The arrival of the technology was scheduled for September, but was delayed. O Campo Grande Newswhich exists thanks to the internet, brings back memories of people who pressured state control of telecommunications to ensure that Campo Grande residents could access the internet through those white tube computers in the 1990s. All through telephone lines.

Nobody imagined that, 27 years later, the city would have 70 free internet points to be used in the palm of your hand, on the street, in addition, of course, to that provided by large operators for a monthly fee.

It was these operators, by the way, that ended up swallowing the market of pioneer entrepreneurs, who managed to set up providers and commercialize the internet in the city, previously restricted only to universities.

It was all very fast. In a matter of a few years, companies with greater investment power bought the first providers and, later, sold them to the operators, which today dominate the national market.

Civil engineer Cid Castello was one of these pioneers. He created the VIP provider, which had affordable monthly fees, around R$30, in updated prices. But he was not the first. Cid recalls that two businessmen from the city surprised the market by getting permission from Embratel to create a provider.

“We were all waiting for a point of presence to be installed in Campo Grande so that we could have commercial providers. Without that, no one could set up a provider, but then businessmen Eloel Neves Aguiar and Cleto Mendonça talked to Embratel and managed to create the first provider, before launching my provider, I was their customer and set up Lan House BitNet. I convinced the Campo Grande mall to rent me a part of the corridor, where there are now kiosks. It was something different, because this space was not used”, he recalls. Cid Castello.

The engineer, who would later delve into the subject, studying Computer Networks, soon saw that the city’s provider market would be “swallowed”, in his words.

“At the same time, Marcelo Gimenez set up the MS Internet provider. The owner of Hotel Exceler, Armando Araújo, set up Net MS and ACICG Net was also created. Some were sold, others left the market. There the story of independent providers ends. Big companies would swallow the small ones and then come the telephone operators. My company was sold to UOL. I set up the company in 1995 and sold it in 1999”, says Cid.

commercial Association – Among the pioneers, one had a different profile. It was not a company, but an association. The ACICG (Commercial and Industrial Association of Campo Grande), created its provider from the efforts of Nelson Nashif and his team. He presided over the entity from 1993 to 1996 and was vice president from 1990 to 1993. Nashif passed away in July of this year.

It was not easy to launch the provider, as recalled by the electrical engineer and technical consultant at ACICG at the time, Zenon Lopes Rodrigues.

“At the time, Embratel wanted a monopoly on non-academic access and refused to cede the connection codes to the ACICG. In a telephone meeting, I, Nelson, Ana Beatriz, who was marketing director (deceased a few months ago), called the Embratel engineer and he refused, saying that even if the minister called him, he would release it”, he says. .

Next, Nelson called Guilherme Afif Domingos, who from 1993 to 1997 was president of the CACB (Confederation of Commercial and Business Associations of Brazil), who called the Minister of Communications. In 15 minutes, Embratel called the ACICG and passed the coding, according to Zenon.

“ACICG also created the first internet shopping mall in Brazil. All thanks to Nelson’s vision. Purchases were made by email at that time,” he says.

An advertisement aired on TV, with actor Edson Celulari, shows the announcement of the new service, from a provider station, inaugurated in February 1996.

“Now, you from MS can access the internet. It is the Commercial Association of Campo Grande opening the way for you”, says the actor.

The association entered into an agreement with other entities to offer internet access to professionals, teachers and students, according to an article published in the newspaper A Crítica at the time.

When Nashif left the presidency of the entity, the project lost steam, according to Cid. “Nashif left the market and my company took over all the clientele, including Miro Ceolim”.

Miro would later have his own provider through a franchise. He was a more robust provider compared to those that emerged at the time, but the great achievement was founding an online newspaper in 1999, times of dial-up internet, together with partner Lucimar Couto.

“I bought a franchise that today is Terra. It was NutecNet, made up of Brazilian entrepreneurs who lived in Silicon Valley and came to Brazil to bring the internet to the country. The name changed to ZAZ. The Spanish bought it and changed the name to Terra”, summarizes Miro Ceolim.

in the palm of your hand – About two decades later, the paths opened by pioneer entrepreneurs brought new scenarios. On the streets, the city hall offers free internet in 70 locations. It works fine except when applications are very demanding, like Banking Apps for example.

Gabriela dos Santos, 19, works as a clerk in a commerce on Rua 14 de Julho with Barão do Rio Branco, says that the internet is good, but it has to be close to the access point.

“Some people, depending on the phone model, can’t connect, especially Iphone. I don’t know why”, says Gabriela.

“When my prepaid balance runs out, I go to the corner to use the free internet, but the bank application doesn’t open. When 5G arrives, it will be great, even more so if it’s free here in the Center as well”, comments Alanis.

See on the map the places with free open internet in Campo Grande:

Previous Juliette only talks to 5 people from “BBB21”. Know who!
Next ‘Military does not produce enough pilots’, says CEO of airline, which ends up being criticized