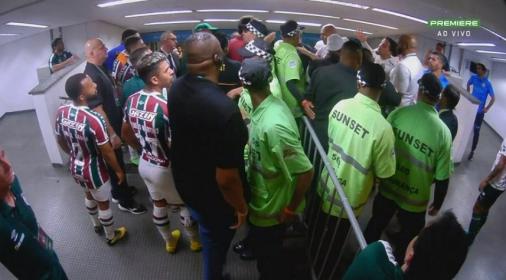 In a direct duel for the top positions of the Brasileirão table, Fluminense and Palmeiras entered the field at Maracanã with a decision-making atmosphere. In addition to the on-field duel, the coaching staff of both teams embodied this spirit and had disagreements during the first half and halftime of the game.

GALLERY
> Find out which clubs have the highest average attendance

The confusion started when a foul was called for Verdão and the Flu’s coaching staff did not agree. According to the Premiere broadcast, Fernando Diniz’s assistant, Eduardo Barros, would have cursed Vitor Castanheira, Abel Ferreira’s assistant. The clash ended up growing and needed the intervention of the fourth referee.

When referee Bráulio da Silva Machado whistled the end of the first stage, Paulo Henrique Ganso, who had just been booked for a complaint, left the field angrily making an “end” gesture, remembering what Fred did in the Campeonato Carioca.

But the feud didn’t end there. On the way to the access tunnel to the Maracanã changing rooms, the technical commissions had a disagreement again. In the images shown by Premiere, Fernando Diniz looked very excited arguing with Palmeiras, as well as Eduardo Barros, who had to be restrained by security and staff.

Diniz even spent a long time talking to Anderson Barros, football director at Verdão, amidst the heated mood. Felipe Melo, ex-alviverde player, also seemed to argue with a character from his ex-club, who could not be identified on TV.

After the discussions separated by the grid that divides the access to the dressing rooms, each team went to its side and apparently ceased the confusion. Both teams went into the break without penalty.

It is worth remembering that in the first round of the Brasileirão, in the duel at Allianz Parque, which ended in a 1-1 tie, the technical committees of Palmeiras and Fluminense also had a disagreement.