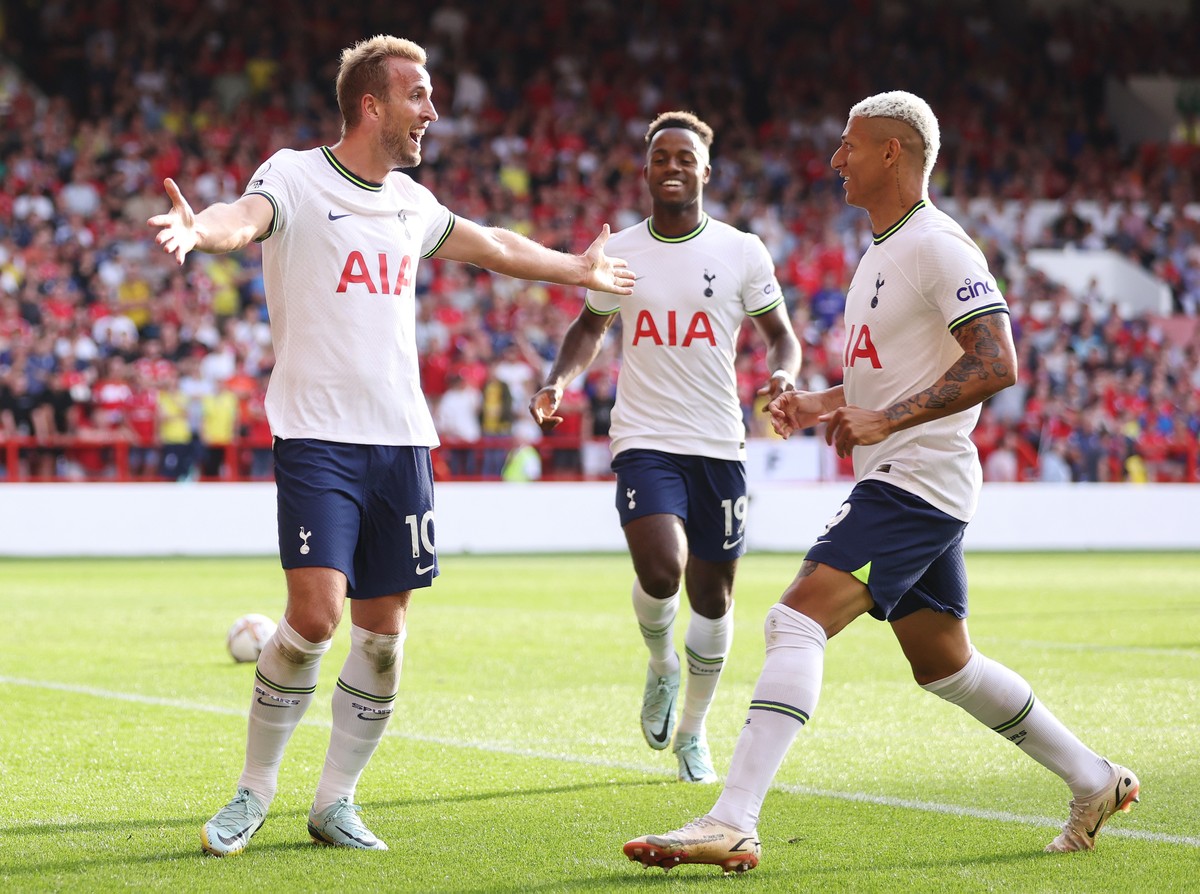 Although he has not yet been confirmed as a reinforcement for Nottingham Forest, full-back Renan Lodi was at the City Ground stadium this Sunday to follow the duel between the club and Tottenham, for the fourth round of the Premier League. However, Forest could not overcome Antonio Conte’s team, who won 2-0, with two goals from Harry Kane, one of them assisted by Richarlison – despite missing a penalty.

The English star became the third-highest goalscorer in Premier League history, reaching 187 goals scored in the league, created in 1992, and equaling former Manchester United striker Andy Cole. Now, he is 21 goals away from equaling Wayne Rooney, also ex-United, as the competition’s second-highest scorer. First in the ranking is Alan Shearer, ex-Newcastle, with 260 goals.

The visitors took the lead after just five minutes, with Harry Kane hitting the net. The English star had the chance to score the second with a penalty at the start of the second half, but stopped in the defense of goalkeeper Henderson. However, nine minutes from time, Kane scored the historic goal after a good move by Richarlison, who passed in the measure for the Englishman to swing the net.

With the victory, Tottenham reached 10 points in four matches in the Premier League, staying in third place – City have the same score, but take the advantage in goal difference – two points behind leaders Arsenal. Nottingham Forest are 14th with four points.

The imminent transfer of Renan Lodi

The terms of the contract have already been agreed, and Lodi has exams scheduled at the English club. Nottingham Forest will pay €5 million (approximately €25.2 million at current rates) for the loan, with an option to buy at €30 million (€151 million). The information is from the Italian journalist Fabrizio Romano.

Revealed by Athletico-PR, Renan Lodi arrived in European football in 2019, when he agreed with Atlético. In the Spanish team, he made 118 appearances and scored six goals in three seasons, but he lost space and was not even used by Simeone at the beginning of 2022/23.

Lodi, 24, was Spanish champion in 2020/21 and disputes a spot in the Brazilian team for the next World Cup. For Brazil, he has played 15 games under Tite’s command.

Nottingham Forest, which occupies the 12th position in the Premier League and hosts Tottenham at 12:30 pm (GMT) this Sunday, at the moment does not have any other Brazilian in the squad. But the arrival of Gustavo Scarpa is already guaranteed, Palmeiras midfielder who will appear at the club in early 2023.