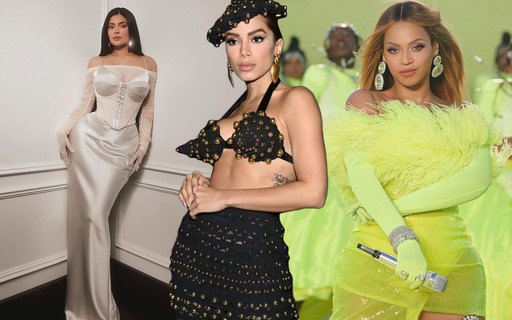 80s fashion: 3 trends from the decade that celebrities are loving – Vogue

The 80’s are back with a bang! The decade, marked by house and disco music (recently revisited by Beyoncé on her new album), brought bright, daring and un-minimalist styles into fashion. From the shoulder pads to pointy bras, tights, neons and lots of glitter, the decade is one of the biggest inspirations for new trends, especially on the catwalks and among celebrities and fashionistas.

Jean Paul Gaultier’s iconic pointy bras, beloved by the queen of pop Madonna, took social media by storm last season, as did the bodices, which Vivienne Westwood revived nearly 40 years ago. With the neon palette, both are part of the trio of top fashion trends from the 80s that are on the rise right now. Learn more about each one and how celebrities are adhering to the look:

Julia Fox announced, Anitta and GKay confirmed: the conical bra, which became iconic with Madonna and Jean Paul Gaultier in the 1980s, is back in fashion. The main responsible for the return of the trend was Daniel Roseberry, creative director of Schiaparelli, who launched a denim model. Gaultier, of course, is still the reference name of the piece since he presented the creation in 1984, in his winter collection, called ‘Barbès’.

Among celebrities, Beyoncé, Rihanna and Kylie Jenner have already embraced modeling and even Alessandro Michele, creative director at Gucci and master of retro-genderless, has also included the style in his latest collections.

A classic from the 1980s, the neon color palette is also making a comeback. One of the icons you joined? Beyoncé, at the Oscars 2022 show. On the occasion, Queen B wore an exclusive neon model by stylist David Koma. The piece was inspired by another dress he showcased at his summer 2022 show.

It is also impossible to forget Cintia Dicker’s Balmain look at the Vogue Ball 2022, alongside Pedro Scooby. At the party, the model wore a dress from the French brand’s pre-fall 2022 collection, with neon shades of green and pink. The two colors dominate the trend, but blue and orange (which stole the scene in Anne Hathaway’s look earlier this year) have already proved to be equally favorites of the moment.

Anyone who didn’t see this trend coming was certainly not on TikTok when the ‘9 inches’ challenge hit the social network in 2021. The trend, in fact, was a challenge that involved wearing a tight corset to the sound of ‘Haus of Holbein’, one of the songs in the Broadway period musical SIX.

The challenge, of course, reawakened the interest of fashionistas in corsets and corsets and, despite the discussions and problems that arose at the time, the item soon found its way onto the catwalks.

It turns out that, in the 1980s, corsets had already made a significant comeback at the hands of Vivienne Westwood, the mother of punk, who launched a collection entirely inspired by Victorian England. Named ‘Mini-Crini’, the show was part of the British brand’s 1986 summer season.

In fact, the neo-romantic culture that began to replace punks in the European night scene (especially in France and England) rescued the corset and sumptuous fashion of the 18th and 19th centuries as a way of rebelling against the corporate and hypermasculinized style that had dominated women’s wardrobes. At the time, the power-dressing philosophy encouraged women to adopt tailoring to enter the job market.

Plus, any viewer of Apple TV’s new hit ‘Physical’ series will remember that aerobics and physical exercise became popular with female audiences in the 1980s. The athletic routine transformed a woman’s body and gave it new, bigger and more muscular shapes that didn’t please many designers. Introducing corsets was an attempt to “re-feminize” the silhouettes.

Thierry Mugler was another name that shone with his corsets in the fashion of the 1980s (and continues to inspire celebrities to this day), as was the famous corset maker, Mr. Pearl, who conquered the industry with her creations.

Previous Traditional World Cup figurines are also a digital phenomenon – Analysis
Next Galvão Bueno is tied up in LA and Desirée Soares jokes: ‘They discovered my husband’ – Marie Claire Magazine