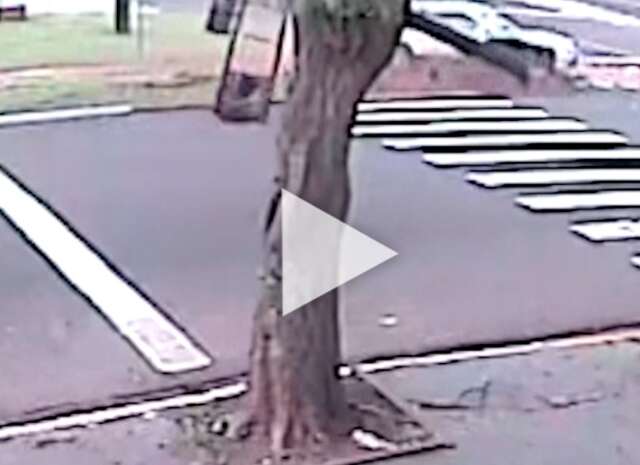 In the footage, four people can be seen getting out of the vehicle after the accident.

Security circuit footage shows the moment when the driver starts the traffic light at the intersection of Avenida Afonso Pena and Rua Paraíba, in Campo Grande.

The accident happened early on Sunday morning and the equipment registers the collision at 5:21 am. The car goes down Avenida Afonso Pena, towards the neighborhood and goes straight to the traffic light, which is pulled out. The Tiguam vehicle stops facing Rua Paraíba.

At least four people can be seen getting out of the car and walking down the avenue. Other cars reduce speeds and some drivers stop and then continue on their way, apparently after finding that there were no injuries.

The car was badly damaged and one of the tires blew out. It is not known whether any occupants required medical attention.

Yesterday, according to a municipal guard who passed by the site, the collision affected the operation of other traffic lights on the road, which had already normalized. At the traffic light location, other equipment was placed, provisionally, until the definitive installation.

The report contacted BPTran (Traffic Police Battalion). In the incident report, it is stated that the team went to the accident site and found the VW / Tiguan stopped on Rua Paraíba.

A security guard at a nearby property told officers he saw the accident and then the car parked on the street and the occupants were said to have left. Soon after, a tow truck approached and the military asked for the presence of the person responsible for the vehicle for the removal.

A woman went to the scene and received guidance that the owner of the Tiguan would be called to repair the material damage.

#article updated at 11:19 am for additional information.

The Infinix Note 12 Pro cell phone was launched this week by the newcomer Infinix, …