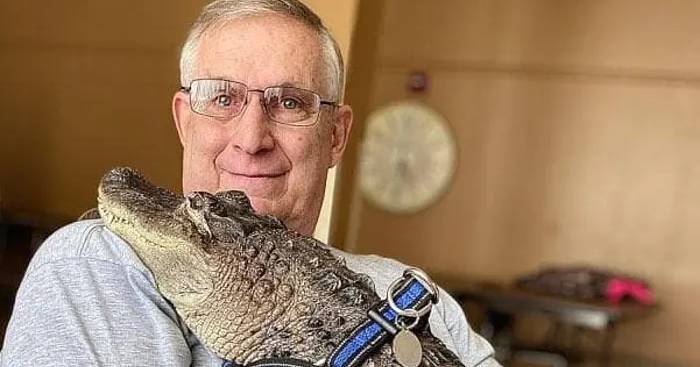 After the dogs and cats, came the “emotional support” alligator

This Wally is easy to find, as he stands out wherever he goes. This is what happened in Philadelphia, in the United States.

“WallyGator” is an alligator and also an “emotional support animal”, which means that its owner can walk and transport it to places where, as a rule, animals are not accepted.

And the reptile was successful in its walk through the park and is already famous on the internet. Owner Joie Henney assures Wally is not a wild beast. On the contrary, she describes him as “a sweet”, reason why you sleep with him in bed and take him for walks.

Six-year-old Wally is 1.66 meters tall and weighs 32 kilograms. He was “adopted” by Joie six years ago and licensed as an “emotional support animal” when the owner was diagnosed with cancer.

In theory, this licensing means that the reptile is able to comfort its owner and for that reason it has some force in US law. An emotional support animal cannot, for example, be refused a lease or banned from living in university accommodation.

Until recently, these animals could even accompany their owners on plane trips, but a recent law update dictated otherwise.

In several US states it is illegal to own an alligator, but not in Pennsylvania, where Joie and Wally live.

And plans for the future? Alligators live about 80 years, which means that Wally may actually live longer than his owner.. But for now, Joie is more concerned with entering the reptile in a contest to choose America’s favorite pet.

Previous Logitech handheld console will run cloud games and Android apps – Tecnoblog
Next “The Rings of Power”, series from the universe of “The Lord of the Rings”, and more premieres of the week (29/08 to 04/09)