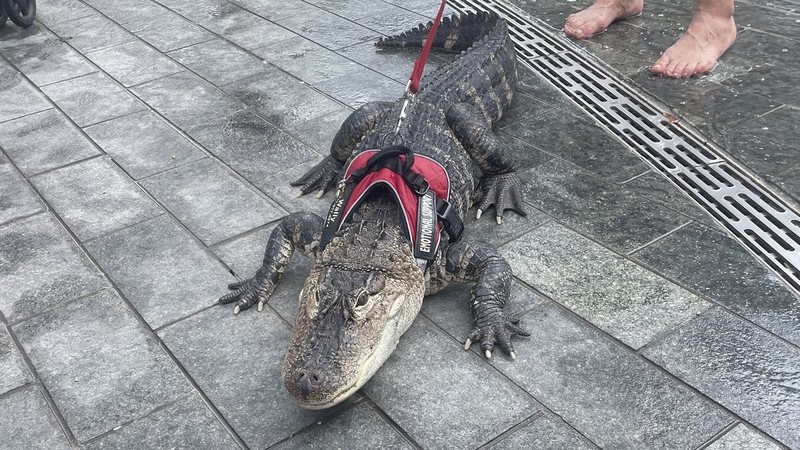 There are people who prefer dogs, others cats, but there are also those who like to have an alligator at home. And the most curious: taking the animal for a walk on a leash. This is what happened this week, in Philadelphia’s Love Park, in the United States.

Contrary to what some people think, an alligator is not always a wild beast, sometimes it can be an emotional support animal and do a lot of good to those around it. At least that’s how it is in Philadelphia, where the reptile gets along very well with humans and even has a name, Wally.

Due to the strong American heat, the reptile’s owner decided to take him to cool off in the middle of a public fountain, with the presence of children and the elderly. But if you think people were intimidated by his presence, you’re wrong. Many took a risk and even greeted the animal.

Several visitors wanted to register the moment with the unusual pet. The alligator also has a TikTok account, which was buzzing shortly after the park encounters.

Wally’s owner, Joie Henney, said he has owned the animal for six years and, since he appeared in his life, his behavior has drawn attention. The alligator had been rescued and Henney became interested in the reptile.

“Wally has been very different from any alligator I’ve dealt with in the last 30 years,” Henney said. “He doesn’t show anger. He doesn’t show aggression. He hasn’t shown any of this since the day he was caught. We could never understand why,” he told CNN.

The tutor still melted: “He’s just adorable. He sleeps with me, steals my pillows, steals my blankets. He’s just amazing.”

The alligator’s amiable posture earned him a formal document that places him as a support animal. While the owner was undergoing radiation treatments for cancer, the reptile was an important part of his recovery.

Henney says people are usually nice when they come across an alligator and are quite excited about it. The tutor totally discards the possibility of the reptile attacking a human. “Wally is the only alligator I’ve ever seen that refuses to bite,” he said. “He IS incomprehensible and hard to believe,” he pointed out.

Previous iPhone SE: Next model will be based on iPhone XR, says rumor
Next Megan Fox is tired of her rocker fiance’s childish ways, says magazine – Monet