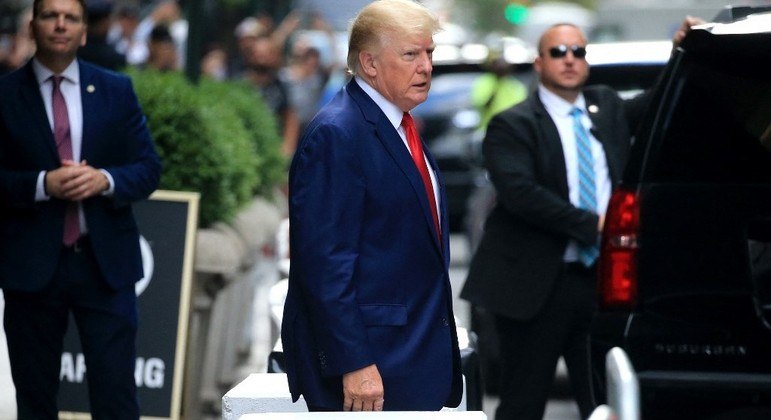 Former US President Donald Trump demanded this Monday (29) that he be declared the winner of the 2020 elections, in which he was defeated by Joe Biden, or that, at the very least, new elections be organized, considering that the previous ones were compromised because of the FBI.

“It now turns out that, conclusively, the FBI buried the Hunter Biden computer story before the election knowing that if they didn’t, Trump would have easily won the 2020 presidential election,” Trump wrote on Truth Social.

With his usual accusations, the former president said it was “fraud” and “electoral interference” at levels “unseen” in the US.

At the center of the controversy is the computer that allegedly belonged to the current president’s second son, Joe Biden, forgotten in a Delaware repair center and filled with private data about Hunter Biden’s business and life.

The press published in 2020, among other revelations, that Hunter Biden facilitated an alleged meeting between his father, when he was vice president of Barack Obama, and Vadym Pozharsky, adviser to the Ukrainian company Burisma, in which the son was a member of the board of directors. .

Republican Senator Ron Johnson made public last week that FBI officials asked agents not to investigate this computer for months, allegedly not to influence the outcome of the last presidential election.

Also last week, Mark Zuckerberg, founder of Facebook and CEO of Meta, admitted in an interview on presenter Joe Rogan’s podcast that Facebook restricted stories about that computer after the FBI urged them to be wary of Russian disinformation campaigns.

Trump said on Monday that there are only two possibilities: “Declare the legitimate winner or, and this would be the minimal solution, point out that the 2020 elections were irreparably compromised and organize a new one immediately!”

The former president has been at the center of controversy in recent weeks after the FBI raided his Mar-a-Lago mansion for taking documents from the White House after leaving office.

The information that the Justice Department has released so far shows that Trump and his entourage may be under investigation for three crimes: obstruction of justice, destruction of documents and breach of the espionage law.

Republican Senator Lindsey Graham said if Trump is indicted there will be “riots in the streets” and criticized the “double standards” that are applied to the former president.

“Most Republicans, myself included, believe that when it comes to Trump, there is no law. It’s about going after him,” Graham criticized.