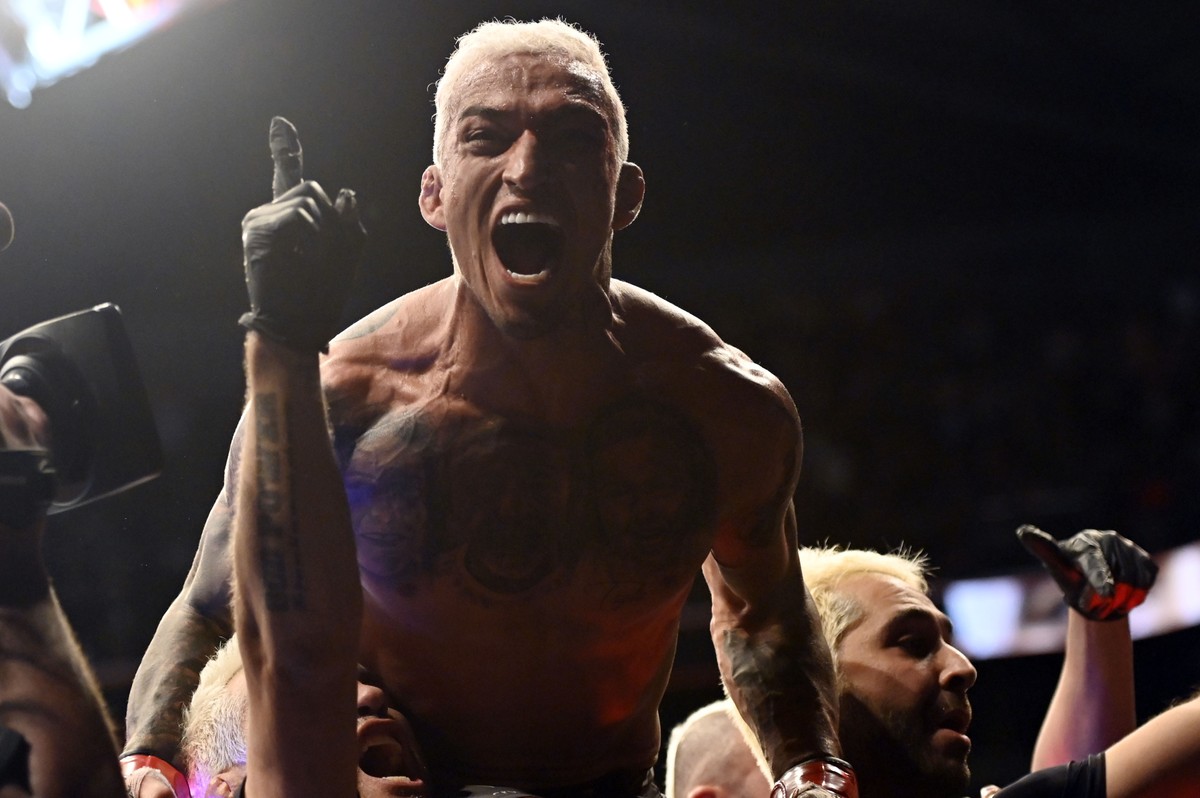 The Mundo da Luta podcast reached its 200th edition this week, and a special occasion deserved a special guest: Charles “do Bronx” Oliveira. The UFC’s “unofficial lightweight champion” spoke with Marcelo Russio, Adriano Albuquerque and Marcos Luca Valentim about a variety of subjects and even answered questions from fans. One of the most talked about topics, of course, was the fight against Russian Islam Makhachev for the title, scheduled for October 22nd in Abu Dhabi. Listen by clicking on the player below:

The fighter from São Paulo was confident that he will win the match quickly and nailed:

Makhachev has been talking a lot about Do Bronx in the media. In an interview with the American TV channel “Espn”, the Russian remembered the Brazilian’s statements about possible fights against Nate Diaz and Conor McGregor to claim that the former champion wanted to choose his opponent to avoid him. The Brazilian was firm in his response.

– Let’s do it like this: take my last 11 wins and take your 10 wins. See who chose to fight and who didn’t choose to fight. It’s a scale. Look at Charles’ names and look at his names. Then you draw your conclusion. Charles from the Bronx is not a made name, brother. His story is not mounted, no. I never chose a fight in my life. I mentioned Conor mcGregor and I’ll say it again: if you say to me, “Charles, do you want to fight Conor tomorrow?” I’ll say: I want! We are talking about money. It will put a lot of money in my account. Nobody is silly. You can ask any stupid UFC fighter, “Fight you and Conor”, to see if they won’t. Dustin Poirier himself did that, he left the fight for the belt to fight for the money.

– These guys want to get into my mind somehow. They said I gave up, I showed that I don’t give up. They said I can’t, I showed that I can. They tried to steal my belt and I said, “Wait, let me show you how it works”. Now this is what they invented, that I choose fights! Just mention the last four names I faced, they’re ranked guys! It’s not the 22nd, 23rd guy, it’s not the guy they hired to fight. I think it was answered well, right, Islam? And when I didn’t say his name, it was because it was a fight that didn’t interest me, I had to talk about the fight that interested me. But you talked about it so much, you wanted it so much, I said: I wanted peace, you wanted war. Pleasure, the war is coming – he fired.

Check out some more topics from the interview:

The desire to face Conor McGregor

You can say what you want about Conor, but he has a legion of fans, so you will gain more followers, you will increase your legacy, your name will grow more and more. Conor was one of the guys who sold the most pay per view in the UFC, a guy who was much better paid than thousands of other guys, even players. We are talking about money, legacy and history. Every fighter has the dream of leaving a legacy and a gigantic history. This is not new, I’ve been asking for this fight for a long time.

He retired and I respect that. However, when he was champion, he sold fights without talking, and today, after he retired, he’s been talking a lot. I’ve never talked about anyone, however, if it’s his will to fight again, surely, why can’t we talk? Show me the money! When we reach the level of the category that we reached today, we have to think a lot about the step we are going to take, we have to talk a lot about money, and then I don’t need to get involved, I let the team get involved for us to do happen. I think it’s a fight that everyone wanted to see happen. But I respect him a lot and I believe he won’t fight again. But who knows, suddenly!

Newly inducted into the UFC Hall of Fame, Khabib Nurmagomedov is a former lightweight champion and coach of Makhachev (Photo: Carmen Mandato/Getty Images)

i’m in it vibe. I know where I came from, where I am and where I want to go. I want to keep showing these kids that a kid who came from the favela to the world can indeed become a great champion, make a great story, earn money, have a nice house, without stepping on anyone, without having to do anything wrong. That’s my legacy, that’s what I have to work for. I’ve had a lot of nervousness; marked my fight, I was sweaty, desperate! Not today, I’m calm, I’m serene. I know how good I am at this, I know what I have to do.

Sorry, I respect all these guys, Anderson Silva, Kamaru Usman, Amanda Nunes, but I don’t know what weight they’re talking about, no. This is the reality. Each person is in a way, all respect in the world, however, I don’t have any weight. I don’t know how heavy they were, how they carried it, but I, Charles Oliveira, don’t have any weight. I don’t want to lose, and the day I lose this belt – and it will happen one day, no one is undefeated for life – you’ll never hear me say that I had a weight on my back. My opinion is this.

I don’t like to stay in that”timing” how big is Charles’ name? What has Charles been doing?” However, things happen like the elders saying that I’m the new Ayrton Senna of Brazil. that 50 years from now, Charles will go to heaven and people will continue to say Charles’ name. This will be very important to me, because we are talking about legacy. The younger ones wanting to be Charles. The kids inside the favela who wanted to be the tramp, the thief, the drug dealer, today they want to be Chales! That’s why I preached my whole life, that the guy could go out within the community to be a big name in the sport or be a great worker That’s what I wanted and it’s working.

Click below to listen to the Mundo da Luta podcast on your favorite aggregator:

Knockout of the Week Candidates

Demetrious Johnson at ONE Championship

Nong-O Gaiyanghadao at ONE Championship

End of the Week Candidates

Marcus Buchecha at ONE Championship

Previous House of the Dragon actor reveals behind-the-scenes problem
Next It’s come to an end! FACEBOOK will shut down mobile app; understand reason for the end of ‘Gaming’