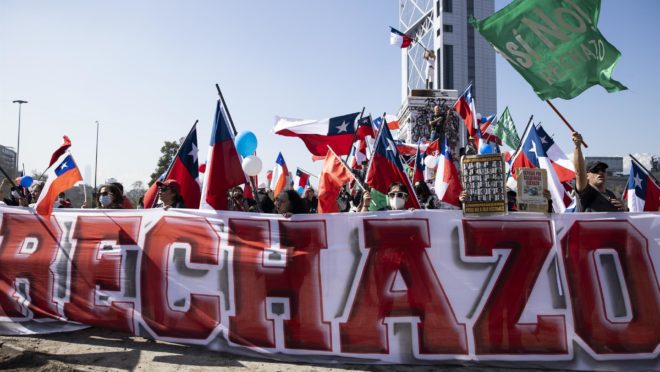 Next Sunday (4), Chileans will go to the polls to decide whether or not to approve a proposal for a new Constitution for the country that has been criticized as “excessively progressive”, since it contains measures such as the expansion of state spending (in creation of national systems of social security and health, for example) without detailing where the resources will come from to pay for this, differentiated legal treatment for native Chilean peoples, among others.

To accommodate dozens of ideas on the left of the political spectrum, Chilean constituents wrote an extensive text, with 388 articles.

If approved, the new Constitution would have more than double the number of articles in the country’s current Constitution, which came into force during the regime of dictator Augusto Pinochet (1973-1990), underwent changes since redemocratization and has 143 articles – they were 129 until 2019, but there were additions to have legal provision for the current constituent process.

However, in a study published in 2014, two political science experts at the University of Michigan, George Tsebelis and Dominic J. Nardi Jr., warned that, contrary to what Chilean constituents advocate, longer constitutions do not necessarily represent more development and prosperity.

On the contrary: when analyzing the constitutions of 32 member nations of the Organization for Economic Co-operation and Development (OECD) and their economic and political situations, they concluded that those with the longest charters were poorer and more corrupt.

Tsebelis and Nardi pointed out that it is more common for constitutional amendments to be made in longer Magna Cartas, as their excess of rules often restricts the role of the current ruler.

“The results suggest that more detailed constitutions are amended more frequently, despite being more difficult to amend, because they are more likely to contain restrictive provisions that impede the government’s ability to pass necessary or desired laws,” the political scientists wrote.

Likewise, this government “stunting” also means that longer constitutions are associated with lower levels of GDP per capita, the study found.

“We believe this correlation suggests that detailed constitutions are more likely to prevent governments from taking necessary measures to counter economic shocks,” Tsebelis and Nardi pointed out.

The two researchers highlighted that countries with more extensive charters appeared with worse results in the World Bank’s Indicators of World Governance and NGO Transparency International surveys. However, Tsebelis and Nardi said it was unclear whether corruption spawned longer constitutions or vice versa.

“We could imagine two different causal paths. First, knowing that political elites cannot be trusted to adopt sound economic policies, authors can adopt longer constitutions with the aim of fighting corruption. Alternatively, corrupt special interest groups could convince constitutional drafters to protect their interests from future troubles. In that case, longer constitutions would result from capture by these elites and manipulation for financial purposes,” they said.

India has one of the largest constitutions in the world

A comparison between the two largest democracies in the world (in terms of population) supports the thesis of Tsebelis and Nardi.

The United States Constitution is a model of brevity, as it contains only seven articles. In the most recent list of United Nations human development indicators, which compiled data from 2019, the United States appeared in 17th place. In Transparency International’s 2021 Corruption Perception Survey, Americans ranked 27th.

India, on the other hand, has one of the largest constitutions in the world: the original text, which came into force in 1950, contained 395 articles. Since then, the number of articles in the Charter has increased to 448. In the 2019 UN human development list, India ranked 131st, and in last year’s Transparency International survey, 85th.

In an interview with the legal news website Courthouse News Service, political scientist Patricio Navia, a professor at New York University, said that the “extremely long text” of the proposed new Chilean Constitution “is more a policy platform than a book on what are the rules of the game?

“Constitutions should be short. Long constitutions are like long contracts. Nobody reads them and it becomes necessary to modify them many times”, he joked, warning that “the long list of social rights” of the new letter (whose rejection has led research in Chile) can generate a “priceless” bill.