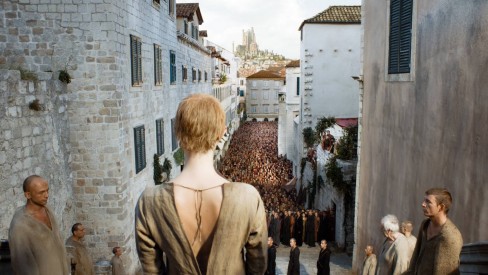 In which episode is Cersei humiliated on Game of Thrones?

The episode where Cersei is humiliated in Game of Thrones is one of the heaviest in the series, even without much blood or beheadings. But do you remember which episode this is?

In which episode is Cersei humiliated on Game of Thrones?

In the tenth episode of the fifth season (5×10) Cersei Lannister was arrested, tortured and humiliated in a public square, being forced, by Unella, to walk before the people, without clothes, without hair and mistreated. At the end of season 6, Cersei Lannister takes revenge on Unella, and this is where the worst day of the actress’ life arrives. This is one of the most emotionally charged sequences in the TV adaptation of the story written by George RR Martin.

In today’s post, we remember the episode where Cersei is humiliated in Game of Thrones.