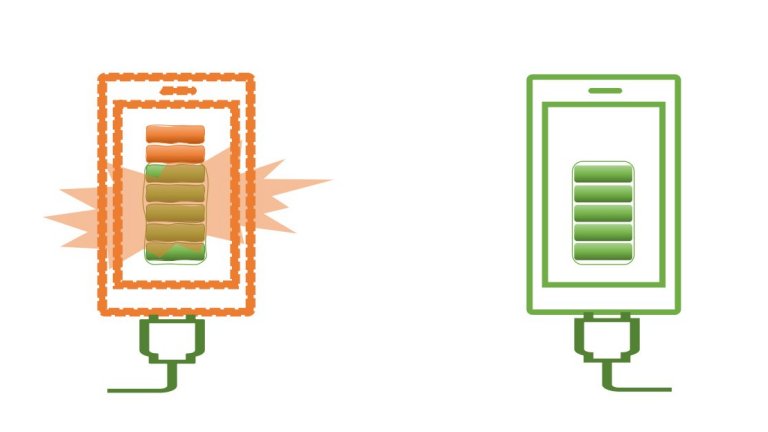 The maser ensures that the quantum battery has a “bias” indicating when it has reached its full capacity (right). Without it, it charges until it explodes (left).
[Imagem: IBS]

Recently, researchers in South Korea have demonstrated that quantum batteries will have an unbeatable charging speed because, thanks to quantum effects, all cells in these futuristic batteries will be charged simultaneously.

Despite these advances, experimental achievements of quantum batteries are still scarce – the first quantum battery was introduced in 2020, but it still looks like the superconducting qubit system of a quantum computer.

And there is another problem: Although it can store a huge amount of energy, if you keep the charging stream on, the quantum battery will continue to store energy, as there is no mechanism to stop charging, which is extremely risky – compare this forgetting your cell phone connected to the charger and the battery not stopping at 100%!

To overcome this drawback and allow quantum batteries to advance towards practical use, Vahid Shaghaghi and his colleagues in South Korea and Italy turned to a quantum mechanical system that has been much studied in the past: the micromaser.

Maser is the microwave version of the laser, being the acronym in English for “Microwave Amplification by Stimulated Emission of Radiation”. The maser is considered the father of the laser, but a room temperature maser was only created 10 years ago.

In more general terms, a system where a beam of atoms is used to pump photons into a cavity. This makes it very similar to one of the quantum battery models, where the energy supplied by a laser is stored in the electromagnetic field, which is charged by a stream of qubits interacting sequentially with it. That is, a micromaser can work like a quantum battery.

And, even better, the micromaser doesn’t suffer from the problem of “infinite charging” – it’s infinite as long as it doesn’t explode. This is because the electromagnetic field quickly reaches a final configuration (technically called a steady state), whose energy can be determined and decided. a priori in the construction of the micromaser. This guarantees protection against overload risks.

Shaghaghi and his colleagues also demonstrated that the final configuration of the electromagnetic field is in a pure state, meaning that it does not recall the qubits that were used during charging.

This is crucial in a practical quantum battery because it ensures that all the energy stored in the battery can be extracted and used whenever needed, without the need to keep track of the qubits used during the charging process.

Finally, the team demonstrated that a micromaser functioning as a battery is a robust system that is not destroyed by changing the construction parameters – this is essential when trying to build a real quantum battery, since imperfections in the construction process are unavoidable.

Having demonstrated the entire battery, the team is now working to experimentally compare and test the performance of different approaches to building a micromaser-based quantum battery.

Previous Direct rivals win, and Galo sees a difficult situation for a spot in Libertadores
Next Batman screenwriter is eyeing actress Olivia Cooke for mystery role