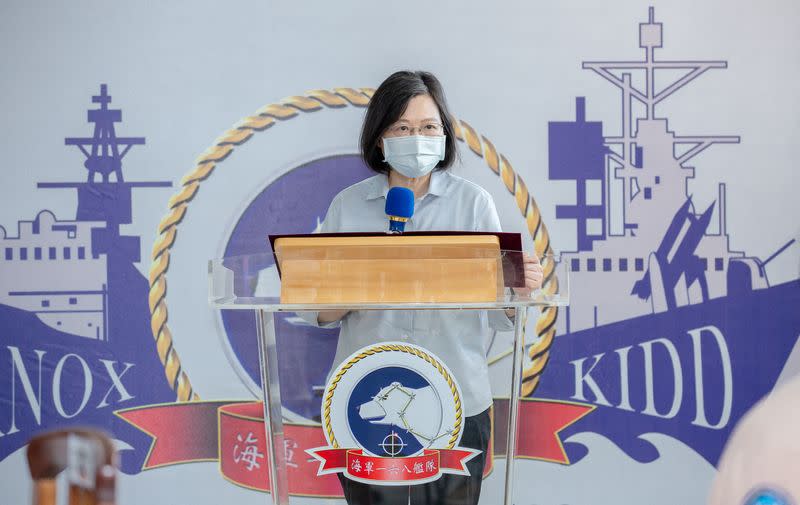 TAIPEI (Reuters) – Taiwan fired warning shots at a Chinese drone that flew over an islet on Tuesday, shortly after President Tsai Ing-wen said she had ordered the Taiwan military to take “strong countermeasures” in the face of what she said. called Chinese provocations.

It was the first time warning shots had been fired in such an incident amid a period of growing tension between China and Taiwan, which Beijing considers its own territory. Taiwan strongly contests China’s sovereignty claims.

The drone returned to China after shots were fired, a military spokesman said.

Taiwan has complained of Chinese drones repeatedly flying too close to small groups of islands it controls off China’s coast, most recently the Kinmen Islands, as part of Beijing’s military exercises.

China held exercises around the island following a visit by US House Speaker Nancy Pelosi this month.

Footage from at least two drone missions showing Taiwanese soldiers at their posts and, in one case, throwing rocks at a drone, circulated widely on Chinese social media.

Speaking earlier on Tuesday while visiting the Armed Forces in the Penghu Islands, Tsai criticized China for drones and other warfare activities in the “gray zone”.

“I want to tell everyone that the more the enemy provokes, the calmer we need to be,” Tsai told naval officers. “We won’t provoke disputes and we will exercise self-control, but that doesn’t mean we won’t fight back.”

She said she had ordered the Defense Ministry to take “necessary and strong countermeasures” to defend its airspace. She didn’t give further details.