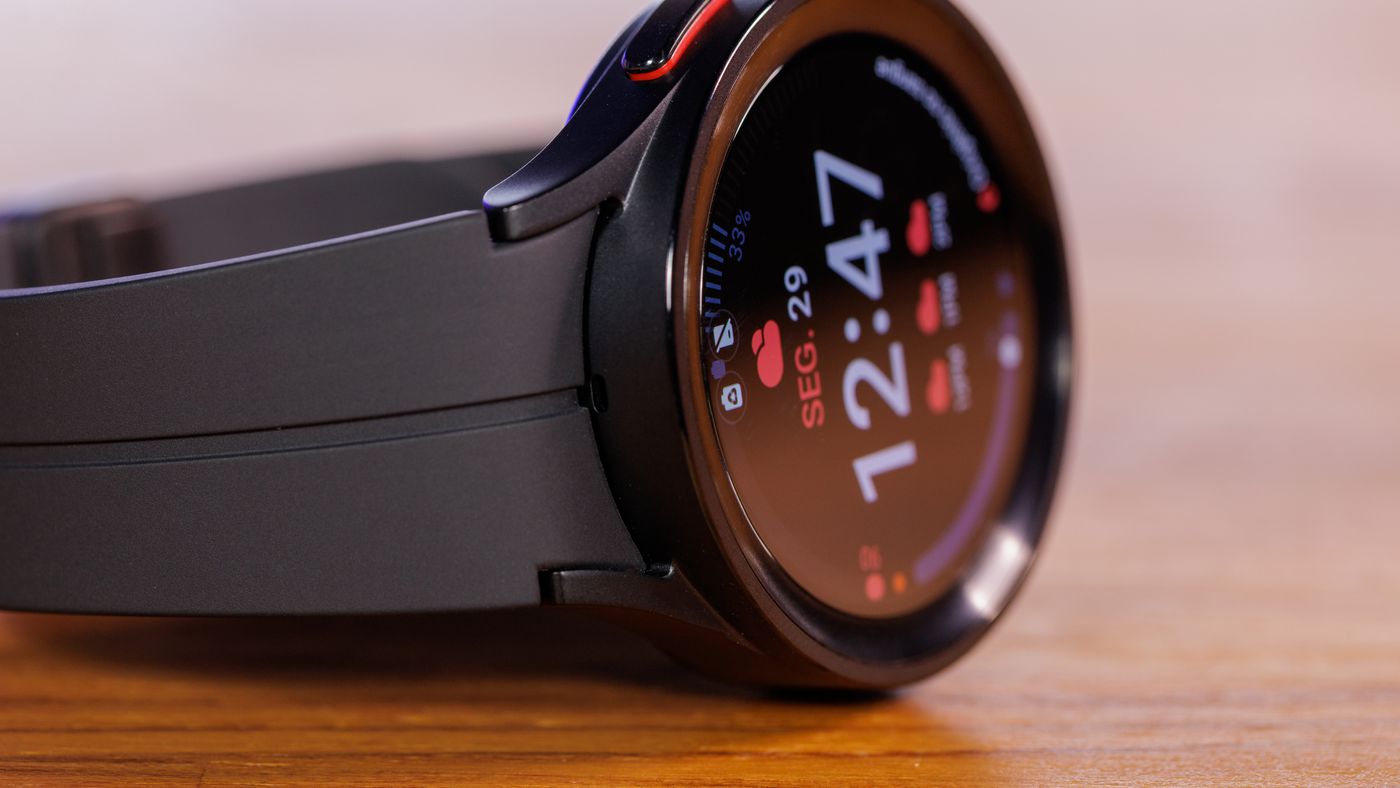 The Galaxy Watch 5 Pro was announced as the great successor to the Galaxy Watch Classic 4. However, Samsung opted for some changes that may displease some fans, but it brings an important novelty: 60% bigger battery.

With just one case size, the smartwatch is big enough to house a 590mAh tank. In other words, its biggest advantage is also one of its biggest weaknesses.

I will explain everything and talk about other advantages and disadvantages of Samsung’s new watch. Let’s go to the Galaxy Watch 5 Pro review.

The design and construction of the Galaxy Watch 5 Pro is not far from its predecessors. The physical rotating crown has been dropped, leaving just a small border on the screen for you to browse through a few items if you want that kind of gesture.

To help with this task, the Watch 5 Pro has a support bouncing around the display. It’s a protruding edge that guides your finger through the thin space on the screen where the tactile rotating bezel is located. In addition, it still protects the display from knocks on walls and the like.

The display features a sapphire crystal coating that is twice as strong as its predecessor. The case is finished in titanium and is available in black or gray.

The clasp of the bracelet is very interesting. It is a magnet with a fixed and an adjustable side. That way, you set the ideal width for your arm and you can take off and replace the watch quickly and easily.

The Galaxy Watch 5 Pro has a circular body, and its case is quite deep, over a centimeter in height. And that’s where the big problem with this smartwatch comes in: as it needs to be a few centimeters from the wrist, it can be uncomfortable with long sleeves.

I wore the watch during a wedding I was invited to, and indeed I felt the tightness of my shirt sleeve over the smartwatch. In addition, it was very difficult to raise the wrist to check the notifications.

Like its predecessors, the Galaxy Watch 5 Pro is water resistant and can withstand pressure of up to 5 ATM. That is, it is possible to use it for swimming — but it is not recommended for use in salt water.

“The biggest positive point of the Galaxy Watch 5 Pro, its 60% bigger battery, is also its biggest negative point. The size of the watch can bother you with social clothes or even outerwear, because of the wrist.”

The smartwatch has the same screen size as its predecessor, if we consider the 46 mm model of the Galaxy Watch Classic 4. In other words, the Watch 5 Pro has a 1.4 inch Super AMOLED display. Now with an even stronger sapphire crystal.

The always-on display option is available, but it consumes more power as the display is always on, showing the time. In my opinion, leaving the option to activate the screen when lifting your wrist is fine.

I didn’t feel any big difference in everyday use. Maximum brightness is comfortable to wear on the street, and you can turn on automatic brightness for the watch to adapt to different environments.

The experience is the same as the Galaxy Watch 4. Good contrast, well defined colors, reasonable resolution considering the size. At this point, only the crash resistance has increased a little, otherwise it’s a good watch display.

Samsung does not disclose much information about the chip used in its watches. For most users, it is enough to know that it is a fast enough processor to monitor your activities and receive notifications without stuttering.

In the case of the Galaxy Watch 5 Pro, the embedded platform is the Exynos W920, which has 5 nanometers and two Cortex-A55 cores. In my experience, it’s enough to carry out the tasks of a smart watch without any problems.

There was only one detail that I noticed during my use of the Watch 5 Pro. The alarms seemed to me to have a slight delay between dispensing on the smartwatch screen and stopping on the cell phone. Sometimes it kept playing for a few seconds, but usually it was milliseconds late.

There are 16 GB of internal storage, about half of which are occupied by the operating system. The watch still runs on 1.5 GB of RAM, which seems to be enough for the most common use of the device.

Overall, Samsung’s smartwatch doesn’t owe much to other devices of the type, at least in performance.

The Galaxy Watch 5 Pro follows the previous generation and brings Wear OS, now version 3.5, under One UI Watch 4.5. That is, it maintains the appearance and usability of the entire line, but with apps from the Google Play store.

It is possible to navigate by gestures and buttons. Before using the watch, it offers a quick tutorial of the most basic operation, which you can access again at any time via the Samsung Wear app on your phone.

The Google Play Store has a large number of apps, most of which are well optimized for smartwatches. You can install favorite services like Strava, Spotify and the like.

Additionally, the Watch 5 Pro supports Google Assistant and Google Wallet, as well as bringing Bixby and Samsung Pay natively. And you can answer or decline calls and reply to messages via the smartwatch.

I missed an option in the list of apps with the names of each one. The Galaxy Watch 5 Pro, like other Samsung watches, has just one screen with the icons grouped together, just the images, really. It is difficult to know what each one is.

The big news in physical monitoring of the Galaxy Watch 5 Pro is the bioactivity sensor. With it, the watch promises to monitor your activities more closely, in addition to allowing a measurement of your body composition.

In fact, the health sensor is triple: heart rate with optical reading, sensor for alletro cardiograms and another for bioelectrical impedance analysis. It is the trio responsible for monitoring heart rate, blood pressure and body composition.

The latter is an analysis of your body fat percentage, skeletal muscle, fat mass, BMI, and even the amount of water in your body. This is measured in the Health app or in one of the widgets on your device, following the instructions.

Another novelty, now exclusive to the Watch 5 Pro, is the Training Route, which allows you to synchronize a list of trails between your cell phone and smartwatch. And it even has a Return Route to help you get back to where you left off, with turn-by-turn voice or vibration guidance.

The watch usually detects physical activity after 10 minutes of movement. But to ensure that it records heart rate, calories consumed and other information, you can enable monitoring manually.

Samsung also promises an improvement in sleep tracking. In addition to the stages, the Watch 5 Pro can identify your sleep type using eight symbolic animals. And it even has night sleep reports.

For the rest, Samsung’s new watch has the same physical tracking functions as its predecessor. It counts steps and can track over 90 different exercise types.

The connection between the Galaxy Watch 5 Pro and the mobile phone is via Bluetooth 5.2. But the watch can also work independently via dual-band Wi-Fi, in addition to having an LTE version. Additionally, it offers GPS and NFC.

Even if you opt for the cheaper version, without LTE, you can receive notifications and even calls when you get a Wi-Fi network. To have 4G, you need to activate a special eSIM from your line to the watch with your operator.

One of the main advantages of Samsung watches over Apple’s main competitors is their support for multiple cell phones. The Galaxy Watch 5 Pro is not just limited to Galaxy smartphones, but works with virtually any Android or iOS device.

The biggest weakness of the Galaxy Watch 4 series was the battery life. The larger models lasted about a day and a half, and a lot depends on the number of functions activated.

But a watch is made to monitor your activities and send you notifications, so it would be silly to keep disabling functions to save charge, right? So, I have good news: the Galaxy Watch 5 Pro has a good battery life gain.

And it’s no wonder, as it’s 60% more milliamp-hours than its predecessor. Interestingly, the duration more than doubled, and I went four and a half days without having to recharge the smartwatch.

With the maximum number of functions activated, the duration is between two and a half days and three and days. Which is still an excellent time away from the outlet. Bigger than any Apple Watch available on the market today, for example.

For recharging, Samsung promises to go from 0% to 45% in about half an hour. And the charger that comes with the watch really accomplishes this feat, but then it takes another hour to fill the remaining 55%. Which totals an hour and a half to recharge.

There are few real smartwatches on the market, and among those easily accessible to the Brazilian public, I can only mention those from Samsung and Apple. That is, the Galaxy Watch 5 Pro competes with its own “brothers” and with Apple watches, practically.

The Watch Series 7 can already be found at more interesting values. Despite bringing little innovation, I think it’s a good idea to invest a little more in the 41 mm version, which starts at R$2,700; or save on the larger one, 45 mm, which can be found at R$ 3,000.

Another option is to switch to the previous generation of Samsung. The 40mm Galaxy Watch 4 is easily found for less than R$1,000, while the 46mm Classic is around R$1,800.

The only downside to last year’s Samsung smartwatches is battery life, which has improved considerably in this year’s Pro version.

Galaxy Watch 5 Pro: is it worth it?

There are few news about the Galaxy Watch 5 Pro, but they can be interesting changes depending on your lifestyle. The main one is the increase in battery, which brings with it a weak point: the large size of the device.

And that will also depend on your lifestyle. For hiking and physical exercise in general, the Samsung watch is a great ally. But it is not a good option for corporate environments, especially for executives, because of the cuff of the shirt.

The price can also scare you, but it’s a matter of waiting a little. In the previous generation, Galaxy line smartwatches had a good reduction in the amount charged in Brazilian online retail. Maybe the R$4,000 at launch will drop to less than R$3,000.

But if you’re not so keen on staying days away from an outlet, trail routes and body composition analysis, the previous generation might be a good way out. The Galaxy Watch 4 line is still in stock at a lower price than the new ones.