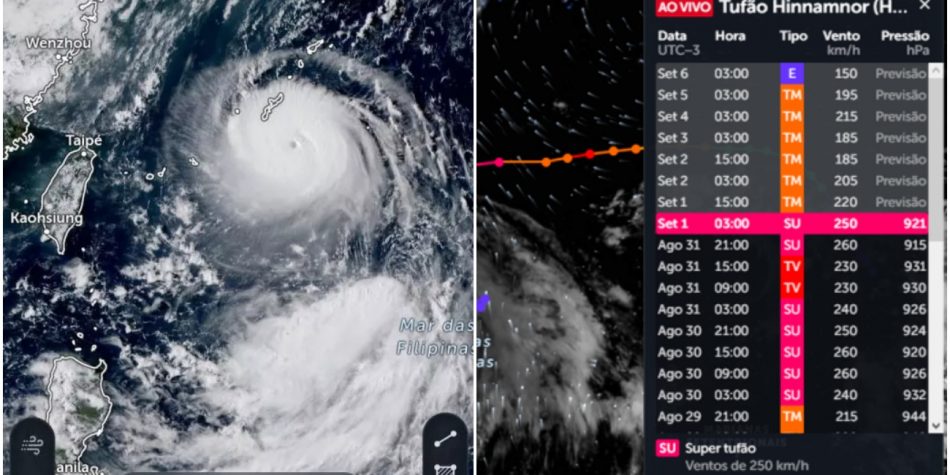 Learn how to follow the movement of super typhoon Hinnamnor live

Considered by meteorologists as the most intense of 2022, the super typhoon Hinnamnor can be followed live. Wind gusts can reach 257 km/h. Hinnamnor is Category Five. He is equated with Katrina. The super typhoon Hinnamnor is considered by meteorologists as the most intense of the year on the planet. – Photo: Playback/Internet

The phenomenon that moves across the Pacific Ocean towards Japan should reduce in strength between this Thursday (1st) and Friday (2nd), but should gain strength again at the end of the week.

Those who want to follow the trajectory of the super typhoon live can check it out on Google Earth, for example, which uses data from the US National Hurricane Center and the Japan Meteorological Agency.

It shows the past, current and future trajectory for active tropical storms and is updated every 30 minutes.

Through the map it is possible to follow the severity of the storm and the updated position of the typhoon, in addition to the risk areas. Zoom Earth for the computer also reveals the super typhoon’s trajectory through Asia and its intensity. The program monitors in real time and brings warnings from the authorities and forecasts for the next few hours.

It is also possible to follow live on Twitter. The team uses data from the Japan Meteorological Agency, the US National Oceanic and Atmospheric Administration, the Cooperative Institute for Atmospheric Research, among others.

On Saturday (3), the super typhoon will be between China and Japan and poses risks to Japan. Alerts were sent to the population of Okinawa for residents to seek shelter.

The high temperatures of the sea surface where the super typhoon will pass offer conditions to trigger an atypical storm surge. Japan’s weather officials have warned that the winds could topple buildings. The super typhoon is expected to continue its trajectory towards the Korean peninsula, being able to skirt Taiwan and the coast of mainland China.

With information from Gizmodo Uol*

Previous Will Instagram and WhatsApp stop being free? See what the target says
Next Cruella 2 will be musical and may have Taylor Swift in the cast, says rumor