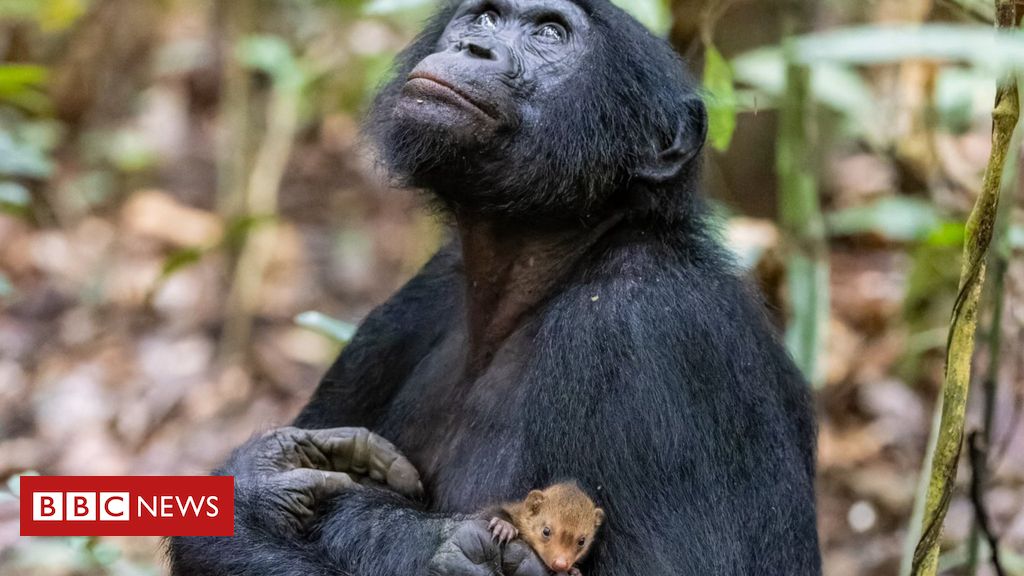 A tender moment or something more sinister?

The image appears to show a bonobo hugging a small mongoose as if it were a beloved pet. But instead, maybe the monkey took the baby mongoose to eat for dinner after it had killed its mother.

But that would be unusual — bonobos mainly eat fruit and only hunt occasionally.

The intriguing behavior was photographed by Christian Ziegler in the Democratic Republic of Congo.

The fascinating photo was selected as highly recommended in the 58th edition of the Natural History Museum’s Wildlife Photographer of the Year (WPY) competition.

The list of finalists was revealed this Thursday (01/09), and the winners will be announced in October.

Christian had been following the group of bonobos, “submerged up to his chest in the flooded forest” of Salonga National Park for days, when he spotted the young male holding the small mongoose in his hand.

“I was very surprised to see how he carried the mongoose so carefully. I immediately started following him and documenting him,” the photographer tells BBC News.

According to him, the monkey held and caressed the little mongoose for over an hour.

But it could be planning to eat him.

When bonobos capture prey, they don’t kill it right away—instead, they start eating when they’re still alive, according to Barbara Fruth, director of the LuiKotale Bonobo Project, who has observed these animals for more than 20 years.

But sometimes, if the dinner is too big and the monkey is satisfied, he treats the leftover live prey as pets. Usually, these animals are eaten later.

Fruth believes this is probably what was happening in the photo.

She points out that bonobos are known for their gentle, empathetic and peaceful nature.

“We know that in captivity bonobos care for individuals that are not of their own species,” says the expert.

In the wild, however, a bonobo is unlikely to care for another species as a long-term pet, she said.

But Fruth does not rule out the idea that the apes keep other animals as accessories to attract the interest of other members of the group and thus elevate their status.

In the end, this mongoose had a happy ending — the bonobo ended up releasing its “pet”, which was unharmed.

The mystery behind the photo is part of its fascination for the judges of the Natural History Museum competition.

Natalie Cooper, a senior researcher at the Museum of Natural History, selected the finalists with her fellow jury members from nearly 40,000 entries in 20 categories.

“We’re looking for technically brilliant images — the ones you see once and wake up the next morning still thinking about it,” he says.

The WPY has become one of the most prestigious competitions of its kind. Entries were received from 93 countries for this year’s event.

The category and Grand Prize winners will be announced during a ceremony at the Natural History Museum in London on 11 October.

The annual exhibition of the best photos, held at the museum, will open on October 14.

In this image by Richard Robson, he and his camera became an object of fascination for this young southern right whale. The encounter lasted 30 minutes, with the whale swimming around him, moving away and coming back for another look.

Whales were hunted to the brink of extinction in the 19th and 20th centuries. But the population of right whales, known as ‘tohorā’ in Maori, is recovering after hunting was banned.

A school of curious perch found photographer Tiina Törmänen while she was snorkeling in a lake in Posio, Lapland.

Overgrowth of cloud-like algae as a result of climate change and warming waters can cause a problem for aquatic life when they consume oxygen and block sunlight.

Dutch photographer Jasper Doest captured Lubinda Lubinda, station manager for the Zambezi River Authority, in front of his new home (right), which he did not need to build as tall as the last one due to the lower water levels.

Climate change and deforestation have resulted in more droughts in the Zambezi floodplain.

“We can talk about climate change to the limit, but until you see the reality of the problem on the screen in front of you, it’s hard to connect with that subject,” says Natalie Cooper of the importance of image.

More than 20 polar bears have taken over Russia’s Kolyuchin Island, abandoned since 1992, in search of food. With climate change reducing sea ice, polar bears are finding it harder to hunt, scavenging closer to human settlements. A low-noise drone was used to capture the stunning image.

Here the photographer waded through chest-deep water to capture a breeding frenzy at dawn. You can almost hear the mating calls of male glider frogs as the females lay their eggs on leaves — about 200 at a time — which later fall into the water like tadpoles.

Joshua is now eight years old, but he was just six when he captured this majestic deer during a heavy blizzard in London’s Richmond Park. He started using a toy camera as a baby and evolved into a compact camera shortly before this photo was taken.

“It looked like he was taking a snow bath,” says Joshua.