With each big signing, the question is repeated by rivals: “Where does the Flamengo?”.

The answer goes far beyond a single source of income, but the closing of the transfer window in the main European countries has rounded off impressive numbers in the red-black budget since 2019 with the sale of players. If the so-called magic year was the starting point for superinvestments that already exceed R$ 800 million, more than R$ 1 billion entered Flamengo’s cash with negotiations of its assets.

The math includes sales, solidarity mechanism, bonuses stipulated in the contract and even a good part of the amount paid by Milan in the purchase of Lucas Paquetá, which was carried out during the Bandeira administration, but entered the club at the beginning of Landim’s term (understand here). The simple and straightforward cash flow from buying and selling players helps clarify the question at the beginning of the text without too much complexity.

With the sale of Lázaro to Almería in the final stretch of the window, Flamengo approached R$ 130 million in this type of revenue in the current season. An expressive figure, but which ends up being well below those that turned over R$ 300 million in 2019, 2020 and 2021. 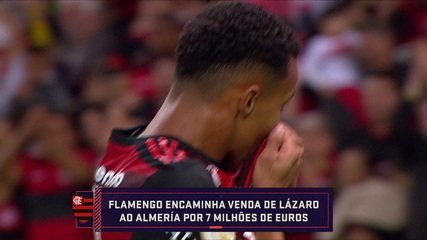 Revenues from sales and loans

The finance department’s math totals BRL 991 million in these four years with player sales and loans alone, but the amount exceeds BRL 1 billion if other triggers are added. The sale of Lucas Paquetá from Lyon to West Ham, for example, will generate around R$12 million through FIFA’s solidarity mechanism.

Lucas Paquetá on top of the Olympic Stadium, the home of West Ham in London – Photo: Disclosure / West Ham

There is also the example of players like Pablo Marí and Gerson, whose sales were boosted by individual and collective goals achieved by Arsenal and Olympique de Marseille, respectively. In this period, Flamengo released players with the maintenance of assets. Just this week, Vitinho kept 35% of the economic rights linked to the club and Lázaro 30%.

In all, Flamengo accounts for the revenue generated through 29 players. In the group, Reinier and Gérson are the super sales with ease (always emphasizing that Lucas Paquetá was traded in the Bandeira era and enters the mathematics of current management), but names like Rodrigo Muniz, Michael, Léo Duarte, Cuellar and Yuri Cesar are also seen as big sales between R$30 million and R$50 million.

Currently at Girona, REinier is the biggest sale conducted by the current management — Photo: Getty Images

The sum also includes names that would go unnoticed by the fans, such as the loans from Richard Rios and Thuler, and the sale of young Caio Roque, who did not even play professionally, to Grupo City for almost R$10 million.

Executive director Bruno Spindel spoke about the balance in entries and exits, which allow Flamengo to reinvest in signings and generate even more revenue in awards, box office, growth of the fan-partner, among others:

– The sporting success of the team on the field is the basis of all the growth of Flamengo in the last four years. In this period, we hired great players, kept the idols and won titles. All the result of a well-oiled machine.

The answer to the question “where does Flamengo’s money come from?” It also points to revenues such as the member-supporter, who approached the mark of 100 thousand adhesions again and generates revenue of R$ 8 million per month for the club. Another point that the finance department highlights are the awards with nine titles and four vices in the period between 2019 and 2022.

Numbers that help explain the salary of R$ 19 million per month of the current squad and the investment power of the size of purchases of Gabriel (R$ 97 million), Arrascaeta (R$ 89.4 million), Pedro (R$ 88.2 million) and more recently Everton Cebolinha (R$ 73 million).

one day after vampetworld champion with the Brazilian team in 2002, revealed that the winning …