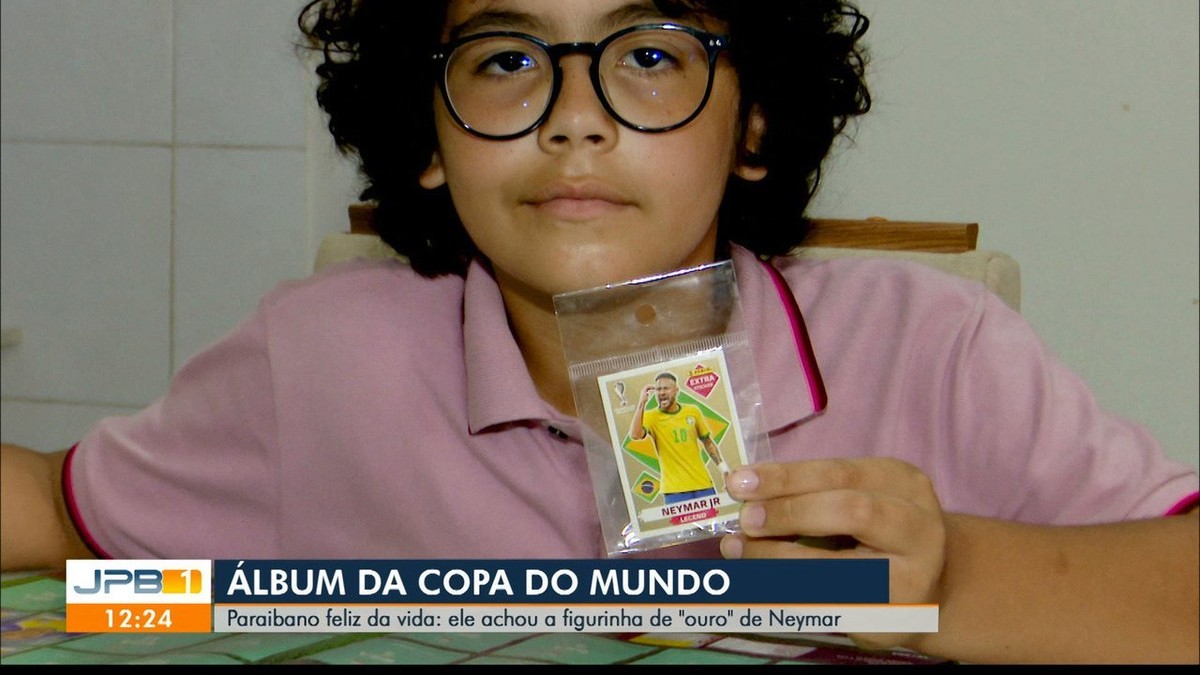 The boy Enzo Lucena, just eight years old, joined the select group of collectors of the World Cup album when he found the rare Neymar figurine. And the achievement had an even more special taste: the find came right away in its first little package. In Patos, in Paraíba, he was the first lucky player with a golden item from the PSG number 10, one of the most valuable in the collection.

Danusa Lucena, mother of the 8-year-old boy, says she didn’t know about the rarity of the Brazilian player’s figurine. When faced with the appearance in the first package purchased, she researched on the internet, saw that it was a difficult item to find and that it was still being negotiated for high values ​​on sales sites. She even claims to have been the first Neymar gold chrome found in Paraíba.

— When we opened the first little package, the first figurine that appeared to us was Neymar’s. I just didn’t know it was worth so much money. I didn’t know where to paste and I went to research where to paste, because I was afraid of pasting it wrong. When we looked, they were already advertising on the internet. And when we look, here in Paraíba there was still no gold. So we decided not to cheat,” commented Danusa Lucena, mother of Enzo Lucena.

Like his mother, Enzo Lucena also had no idea of ​​the object he had found. Knowing the rarity of chrome, he preferred to protect it in a plastic bag and keep it, at that moment, as a souvenir, rather than sticking it in the World Cup album.

– I was happy. I thought it was a normal figure. When we got home and looked on the internet, we realized that this Neymar figurine was very rare – said Enzo Lucena, 8 years old.

Danusa Lucena, finally, revealed that Enzo decided to sell the rare hopscotch shirt number 10 figurine. The amount, which has not yet been defined, will be invested in the boy’s education.

According to the maker of the World Cup album, the chance of finding a chrome from the golden line, which features the Brazilian ace’s figurine, is one in every 1,900 packages. To complete the album, the collector needs to pay at least R$ 536. That, of course, if luck is on the side of not getting any repeated stickers.

The search for Neymar’s sticker has become a fever throughout Brazil. And in João Pessoa it is no different. Even the mother of engineer Lucas Porpino, 84, became a fan of the World Cup album and is now excited to collect the stickers.

— To my surprise I gave my mother a little package, and she wants the stickers now too. Funny that sometimes she complained about so much album and sticker, and this one excited even an 84-year-old lady – said engineer Lucas Porpino.

Algacy Palmeira, collector of João Pessoa, has already bought approximately two thousand envelopes of stickers from the World Cup album. Although he didn’t find Neymar’s legendary chrome, the collector admits he won’t give up looking.

*intern under the supervision of Expedito Madruga.