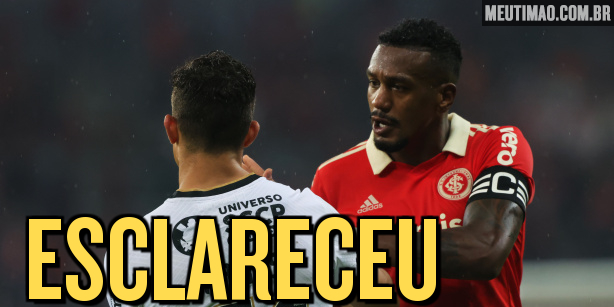 Former player and current football manager of Corinthians, Alessandro clarified the progress of the alleged case of racism involving right-back Rafael Ramos and midfielder Edenílson, from Internacional. The event took place in the clash between the clubs on May 14, in Beira-Rio, which ended 2-2.

At the time, when the pointer marked 30 minutes of the second stage, the match was stopped by the referee after the player from the Rio Grande do Sul team accused the Corinthians player of having committed a racist act. The Portuguese, however, denies having uttered any offense during the duel.

“Some hearings have already taken place, with no major news. We are very confident, the athlete is well, focused, seeing that we are participating in everything, ready for the next games. So, it’s a matter that we leave to our legal department, which is very responsible. We accompany the athlete on a daily basis, providing him with security at work and making him feel comfortable to do what he really has as a responsibility, which is to play football”, said the manager, on Thursday, after the end. of the club’s anniversary celebration.

Alessandro also spoke about the psychological issue faced by Rafael Ramos in the weeks following the episode with the Internacional player. The Corinthian leader said that the Portuguese was shaken and that he had to turn to his family as a form of “help”.

“(Rafael Ramos) He is happy. His girlfriend is here with him, we talked to his family too, who still haven’t been able to come to see him here in Brazil. He felt a lot in the first few days, weeks and months. It was a very bad episode, for both sides, both for him and for Edenílson. I think the most correct thing is that this is defined as soon as possible, put an end to it and that the two can continue doing what they love most, which is playing football”, he continued.

Rafael Ramos, it is worth noting, became a defendant in a criminal case because of the alleged racial injury. The complaint filed by the Public Ministry against the Corinthians player was received last Tuesday. The judge in the case is Marco Aurélio Martins Xavier, of the 14th Criminal Court and Judge of the Fan and Major Events of the Central Forum of the District of Porto Alegre.

In June, the Civil Police had already indicted Rafael Ramos, even after the report from the General Institute of Forensics (IGP) of Rio Grande do Sul concluded that it was not possible to identify what the player said after analyzing images of the match. The athlete is also judged by the STJD and, if found guilty, can face five to ten suspension games, in addition to a cash fine.

Previous Blue Beetle will show a new type of role for Latin actors
Next This is how WhatsApp’s new trick will work to prevent other users from saving your personal photos; more privacy in the app