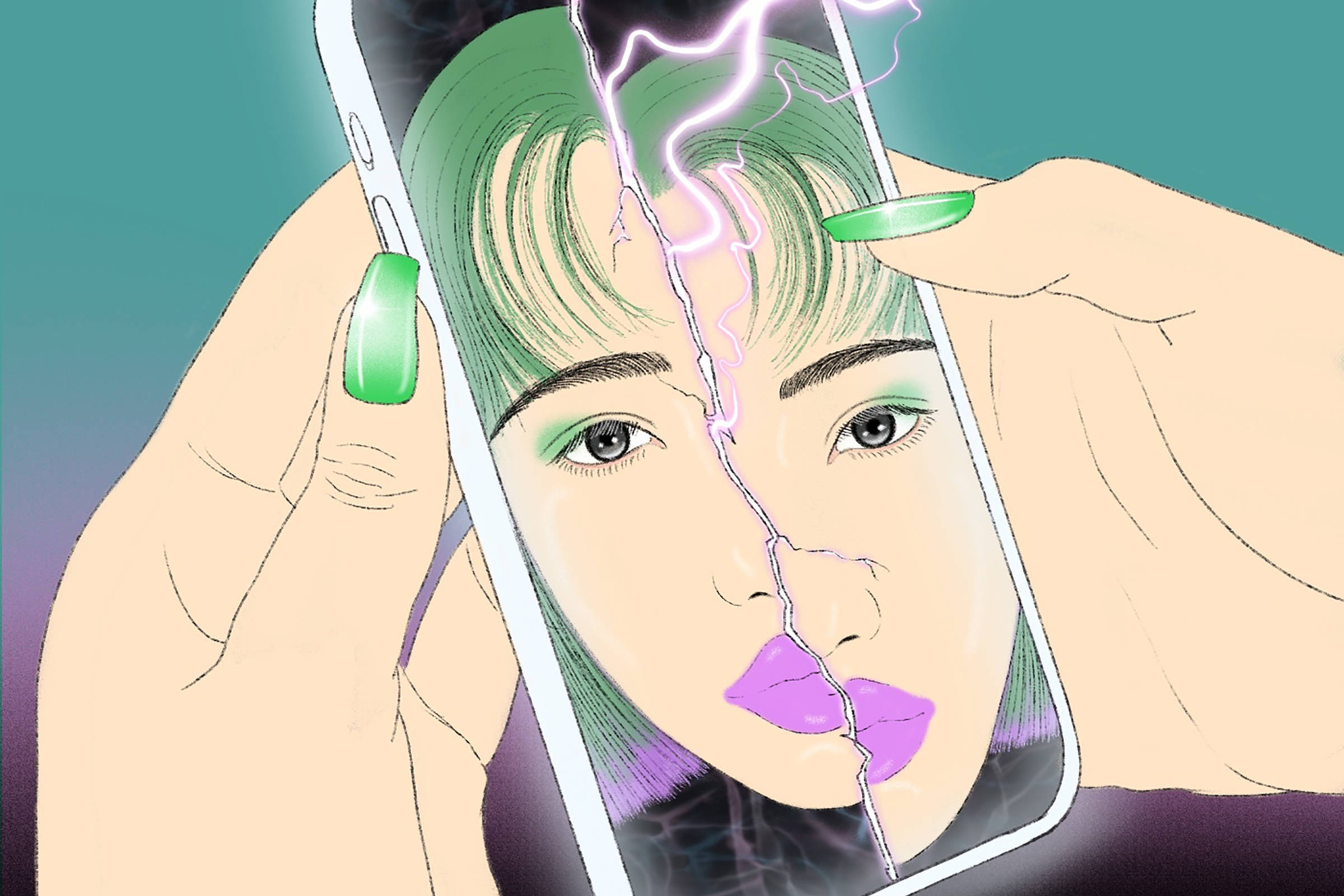 Mirrors lie. They turn things around. The face you see every morning in the bathroom mirror or in your compact: this is your “opposite self” – the reverse of the face everyone else sees. We all know that, in theory.

However, in the last couple of years this simple fact has fascinated and in some cases deeply bothered many people (especially young people) who experiment with facial symmetry filters on social platforms.

Some of these filters reverse the reflection of the mirror, revealing images of the person’s face as other people see it. This disturbs many users, as it sheds new light on all the imperfections that they were so used to, they were already indifferent to, or even that they had already stopped noticing: it could be an uneven hairline, a crooked mouth, or eyes not perfectly aligned in the face. same level.

All of this comes into sharp focus when there is an inversion. For these reasons, seeing yourself in front of your own “inverted” face can be a little unsettling (similar to what you might feel when you hear your own voice on an audio recording).

Other filters amaze us in different ways, creating symmetry, aligning features and dissolving irregularities, or presenting improved but profoundly unfamiliar images through a kind of real-time “photoshopping” or virtual plastic.

Filters have gained huge popularity. It seems that every few months a new trend linked to facial symmetry takes over TikTok, to the sound of music (like Olivia Rodrigo’s “Deja Vu”) or movies.

Dig through the pages and pages of users who try these filters and you will see reactions of all kinds. Some people laugh at what appears to be a distorted, amusement park reflection; others seem to feel real shock and despair when faced with the face they don’t recognize as their own on their cell phone screen.

A widely used symmetry effect, cited in the app as one of TikTok’s own Creative Effects, is “Inverted”. According to TikTok’s public view counts, the inverted effect has already been used in nearly 10 million videos. On the hashtag page #Inverted, a description asks the user, “Are you #Inverted? Use our Creative Effect and find out.”

The algorithm may also favor the use of symmetry filters. Whether it’s algorithmic, pure human interest, or a mix of both, the fact is that videos with the hashtag #Inverted have attracted no less than 23 billion views on the app.

What is driving this craze? The weirdness of pandemic times may be partly to blame. In the last couple of years we’ve had both too much “virtual face-to-face time” with people and too little face-to-face time.

We spend hours alone looking at our own faces and other people’s faces on video conference screens, face to face with all our flaws. (It is worth noting that the increase in plastic surgery in this pandemic era is described as the “Zoom effect”.)

In public, wearing masks deprived us of the healthy human experience of interacting with faces around us. This fact alone may explain the increased interest in apps that analyze faces.

But there are also motivations far beyond the pandemic that fuel this trend. There’s the modern fun of going viral on social media, the age-old and timeless fascination with beauty and how to measure it, the carefree enjoyment of playing with mirror images, and the deep desire to see ourselves as others see us.

Leslie Lizette Cartier, a 20-year-old student from Colorado, found social media gold with her facial symmetry video on TikTok, which has now had 11 million views. The musical accompaniment she chose was Quasimodo’s song from Disney’s “The Hunchback of Notre Dame”. The song had followed symmetry filters before, and Cartier took a ride on the trend. Her lyrics read, among other things: “You deformed / and you’re ugly / And these are the crimes the world won’t forgive.” Despite the song’s message, Cartier said she wasn’t fazed by the lack of symmetry in her face revealed by the filter.

“When I was a teenager, I was always amused by the fact that one side of my face was very strongly defined and the other side was a little less. When I tried the symmetry filter, I was already predicting it would be like this. I made the video with the I meant it to be funny.”

Even so, when his video went viral, many people were disturbed by both the visuals and the audio, suggesting that the video encouraged people to make fun of people with disfigurements. “They said that this filter, this whole trend, is very harmful,” Cartier said. “They said, ‘You’re making fun. Imagine people who are really ugly – it can get to them.’

Journalists have been documenting the phenomenon, talking about the negative mental health effects of seeing how other people see it, and proposing ways to deal with this newly acquired self-knowledge. Many articles treat the issue as a kind of trauma, another example of body insecurity caused by the internet. Some describe the problem as “filter dysmorphia”.

That said, it is possible that the current obsession with symmetry has origins much older and deeper than any of these triggers. The human fascination with symmetry is an ancient phenomenon that has vast cultural and biological implications, something that helps to explain the strong emotions that are being expressed on social media.

Beauty has always attracted evaluation and quantification. Aristotle considered that “the greatest forms of beauty are order and symmetry”.

The concept of symmetry helps us see links between our human life and everything else in creation – a link between human beauty and the complex workings of nature, biology, mathematics and physics. Scientists have discovered that animals look for symmetry in their potential mates. Birds need symmetrical wings to fly. Symmetrical legs help humans walk.

Symmetry becomes crucial to modern physics. As Mordecai-Mark Mac Low, director of astrophysics at the American Museum of Natural History, explained in an e-mail, “Even Einstein’s theories of special and general relativity depend on symmetry, with respect to the relative velocity or the curvature of space itself.” time”.

Thus, part of social media’s obsession with symmetry may actually stem from a millennial imperative that in the past favored symmetry (and possibly still does).

Some scientists who study beauty have claimed this for a long time. In her 1999 book “Survival of the Prettiest,” Harvard psychology professor Nancy Etcoff argues that all human beings, regardless of culture or ethnicity, love beauty and are attracted to it.

“The more symmetry a body has, the more attractive it is,” she said, interviewed. “We see something ‘wrong’ even in the smallest asymmetries.” While concepts of beauty change over time, she said, many people “want to look at something that is near-perfect or has no obvious flaws.”

Is it unfair or wrong to dissect beauty in this way? Is it anti-feminist (given how much more time and energy women tend to devote to their appearance)? Perhaps. For Etcoff, however, cultural interpretations are beside the point. According to her, some things are instinctive.

“We are able to transcend our instinct, but it is part of human nature.” She pointed out that DNA is “the original producer of symmetry”.

Given this, it is not surprising that people who work in the culture of beauty often show as much interest in symmetry as Aristotle or Vitruvius. According to plastic surgeon Stafford Broumand of New York, “Most people are asymmetrical. There are some models who have incredible facial symmetry, and when you see them, it’s breathtaking. Why are they so spectacularly beautiful? impressive is part of the reason.” (Which models in particular? Broumand didn’t respond. “They might even be my patients.”)

But isn’t it a little soulless to reduce our unique, precious faces to equations and proportions? And the charm of imperfection, how is it? And Drew Barrymore’s adorable crooked smile? What about Ellen Barkin’s asymmetrical and sexy features? And Cindy Crawford’s spot?

“All things are literally better, more beautiful and more loved thanks to imperfections divinely given to them,” wrote the 19th century British thinker John Ruskin in “The Stones of Venice.” Etcoff acknowledged, “The strangeness, the rarity, the uniqueness of a person can be extremely attractive.”

We find corroboration of this in an art genre dating back to 15th-century Japan. The Greeks may have valued perfection, but the ancient Japanese tradition of kintsugi (meaning “to join with gold”) had very different ideals.

Kintsugi, which gained popularity in the 17th century, is the art of repairing broken ceramic objects by filling a crack with lacquer and then highlighting the “scar” with gold, platinum or silver powder.

“Kintsugi is an aesthetic principle that celebrates breaks and imperfections rather than hiding or rejecting them,” said Petya Andreeva, professor of Asian art history at Parsons School of Design. “It is derived from the Buddhist doctrine of wabi-sabi, which emphasizes the impermanence of the material world and the transitory character of human experience. The aesthetic of wabi-sabi emphasizes rough or uneven finishes and asymmetry.”

Contemplating kintsugi may not offer immediate solace to distressed young people on social media, nor to others of us who have had enough of seeing our own face in video chats. But it offers valuable perspective, especially when viewed in light of philosophies that claim we have a “natural” or instinctual need for symmetry. Basically, it is not so much about divergent views, but about two optics through which we can look at the same phenomenon.

Whether you love and seek symmetry (let’s call it the Vitruvian side) or celebrate and respect its absence (the kintsugi side) if you’re looking for some kind of harmony in the face of ruptures or conflicts. And seeking to make sense of the world and its images is indeed a noble pursuit, which has a long history.

Previous How to Restore Old Photos Over the Internet Using Artificial Intelligence | Publishers
Next Cuiabá vs São Paulo: see where to watch, lineups, embezzlement and refereeing | Brazilian series a