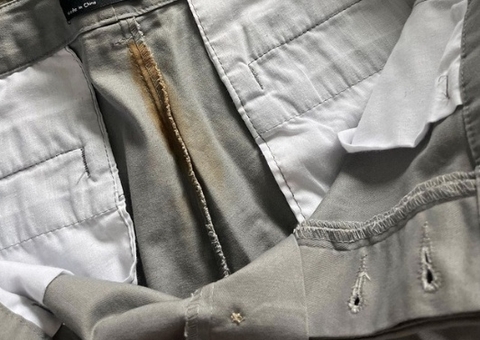 The mother of a 21-year-old was upset to find that the shorts she bought for her son at an online store had poop stains. The case took place in the United Kingdom and came to the attention of netizens after the woman, who is a journalist, exposed the case on the internet.

She stated in a post on her Instagram profile last Wednesday (31), that after delivering the clothes, she felt the odor, but believed it was her dog’s feces somewhere in the house.

However, when he opened the package containing the dress shorts, which were supposed to be new and cost 17.99 pounds (R$ 107), he immediately noticed what appeared to be a poop stain.

“I thought maybe it was a pen mark, maybe it was the sewing, but because of the smell I instantly recognized the poop. I was in disbelief. So I put my nose closer to check again, and it was poop,” says the mother.

Still according to her, the feces were on the back and side of the shorts and had even leaked into the packaging, which arrived sealed and still with the tags.

The woman contacted the company, which regretted what happened and explained that it is investigating the case.