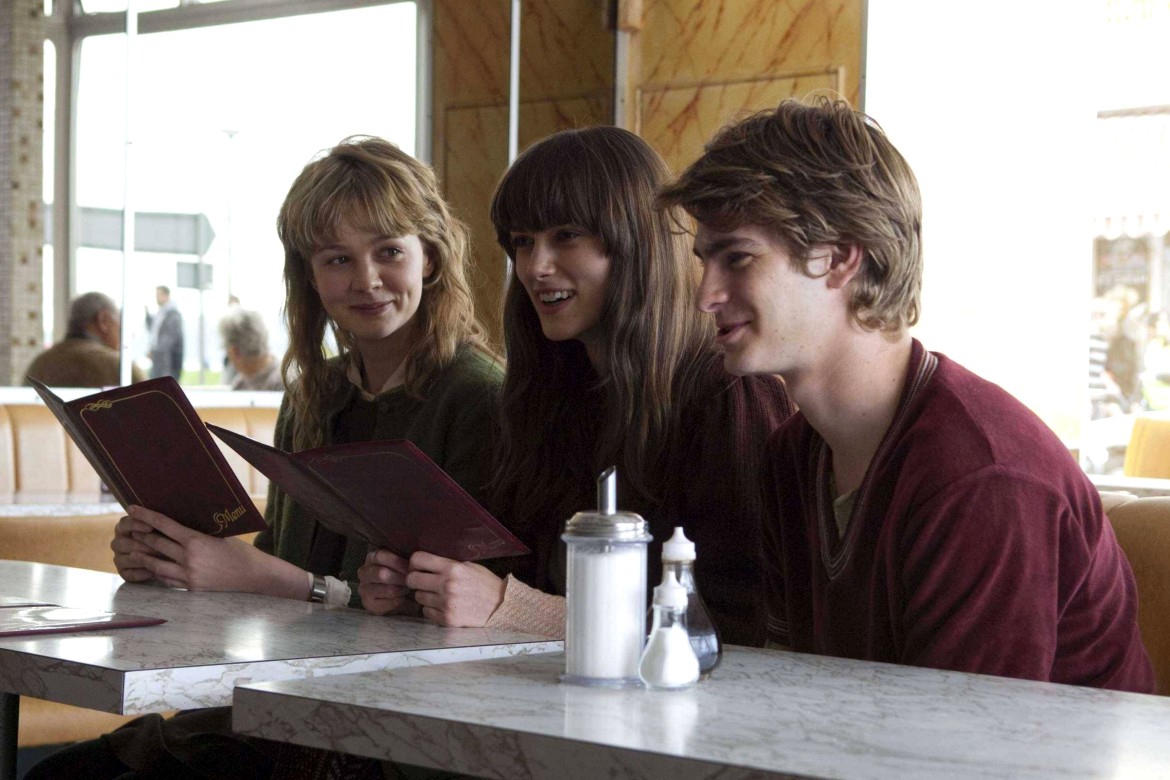 It is indisputable that Mark Romanek’s film is supported by a deep melancholy reflection on the transience and inevitability of the course of a life that has a deadline to end. Based on allegorical plot constructions, the filmmaker, directing the screenplay by Alex Garland – and adapting, in turn, the novel with the same name by Kazuo Ishiguro -, explores, through a utopian-dystopian perspective, the genre human in its finite condition. Although the feature film has an air of science fiction, and proposes a turn to do so, what we find is, without a doubt, a romantic drama with tragic features.

Living in a boarding school whose mystery is the mark of the environment, three friends, Cathy H (Carey Mulligan), Ruth (Keira Knightley) and Tommy (Andrew Garfield), experience the passage from childhood to youth together. With total control over students, rigid routine, punctual food and mandatory healthy habits, the school seems to shape a certain type of human. We don’t know what would be behind such dominance. When at some point they get involved in a love triangle, the friends discover that, although they love each other, everything is doomed due to a greater purpose that the school has about their lives. Love and urgency are topics that meet in the film’s development.

We will gradually observe that the school’s secrecy is much more destructive than we imagine, however, its “dense ethical commitment” puts us on a fine line regarding the judgment of what is right and wrong. How would we behave when discovering that the college builds subjects to be organ donors? After the revelation of Miss Lucy (Sally Hawkins), everything becomes explicit and makes sense, from the reasons for holding an entire seminar just because cigarettes were found around the school to health care, keeping organs in good condition.

The discovery, then, of this first plot It does not affect the film’s unfolding in any way. It is curious that the filmmaker turns this disconcerting information into something indifferent. That is, this data, when discovered by the students, does not cause an uproar, nor does it change anything in the relationship between the characters. Being created as a robot to be a donor is something accepted by everyone and without much question. At this point, the filmmaker works with a modern aspect of the classic myth of the cave in a style very close to that of Yorgos Lanthimos, especially in one of his most uncomfortable works – Canine tooth.

There is a whole formation that seeks to alienate students in order to build a human capable of donating for the other. That’s why he doesn’t shy away from debating ideas of soul, goodness and destiny. When seeking to question this process, an ethical argument is thrown at the table: to save the thousands of people who suffer from the most varied and aggressive diseases. Well, isn’t that enough? It is clear that there is a paradox here: at the same time as the maintenance of the humanity instincts of the students in favor of the Other, becoming a donor, the humanity of these same donors is taken away through a brutal destructive pedagogy.

The film chooses to make an important discussion between the lines of its plot, leading us to infer, at all times, whether it is morally just that there are human beings artificially adapted to, without caring, save the lives of other people who are on the verge of death. The debate is complicated by bringing into the picture characters who are not bothered by the fact that they were born to be donors, and even want to do so.

In fact, it’s not that they always wanted this, but that from a very early age these subjects see themselves destined and trained for it, so that this saving mission becomes a life goal. Immediately after the end of the film, for those who have not read the novel, the question arises about the family of these characters and their lives before entering the boarding school. It is soon noticed that this data is not necessary for the understanding of the idea of ​​the film and it appears even as a positive aspect from the point of view of the inquiry, that is, to make us elaborate hypotheses about the environment that surrounds them.

The romantic drama taken from there draws attention. The filmmaker manages to bring an urgency of the youthful feeling of passion at the same time that, delicately, love becomes an extremely troubled and melancholy affection within this intrigue. I like the montage of the last scene in which a landscaped void is exposed, with just a tree in the middle of nowhere, a symbol of rebirth, a complex allegory about life. As it is important that the image connects to the idea of ​​film, the scenic organization of that moment exposes, in the midst of Kathy H’s reflection, a mirror of the inner emptiness when there is no one else there with her, not Tommy, not Ruth, who already completed their duties. It is a mixture of beauty and sadness when this epiphany reveals, unavoidably, that not only life, but everything that composes it will end.

I will propose, then, that we leave the reading sci-fi aside in a dangerous exercise in analysis and interpretation. With this, we obtain, as a result of a whole, the great metaphor that frames and elevates this film to the status of a coming-of-age ideal: the tranquility that represents the boarding school (indoor) is broken with the exposure billboard of these characters who, grown up, need to face life as it is. The outside world is a new, uncertain and therefore fearsome reality that needs to be faced. Part of growing up is this: remaking yourself, even if it’s a process that hurts a lot – and even if we don’t want to do it, we are forced to do it. More than the meeting, perhaps the disagreement is what contributes most, positively and negatively, to the construction of what we are destined to be. Becoming what one is: this is the drama that marks the cinema of formation and that is presented here in a subtle, allegorical, but consistent way.

Previous What is the digital real?
Next Nadal serves badly and falls in the round of 16 of the US Open against an inspired Tiafoe – 05/09/2022