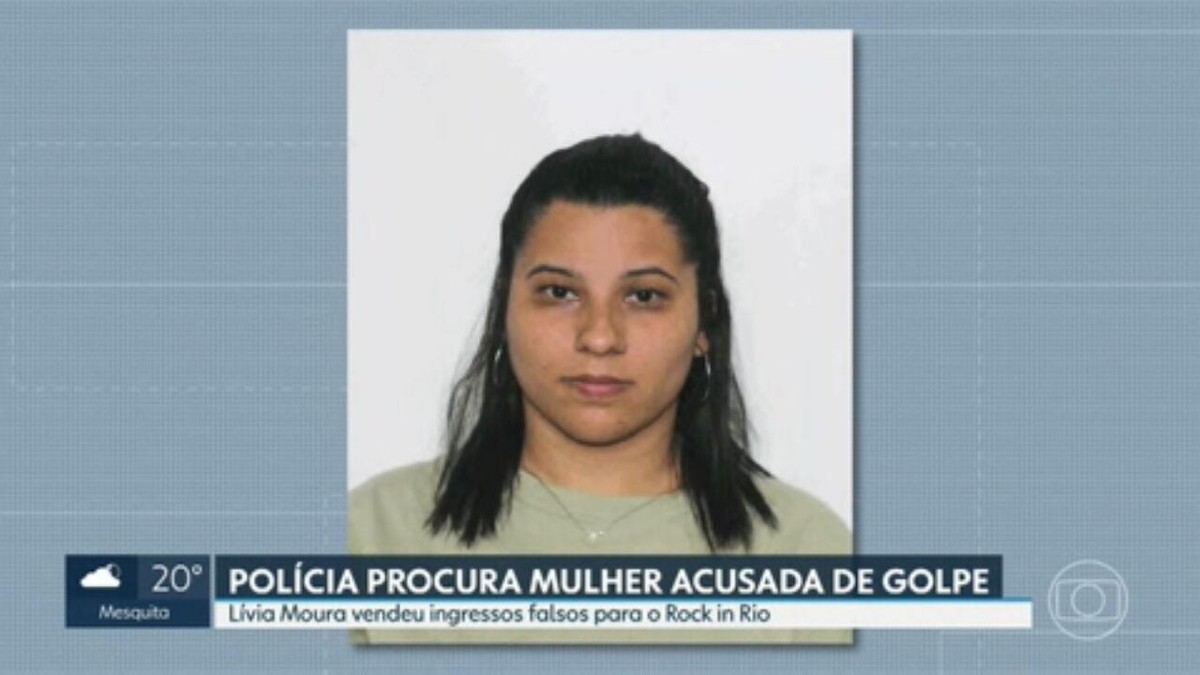 The Civil Police believe that Lívia da Silva Moura, sister of Léo Moura, a former Flamengo player, earned around BRL 500 thousand with the sale of fake tickets to Rock in Rio.

This Tuesday, Disque Denúncia released a poster asking for information about Lívia (see below how to collaborate).

Considered a fugitive from justice, Lívia was indicted for the crimes of embezzlement, copyright infringement, criminal organization and document forgery. Leonardo Moura is not the subject of any investigation.

Last Monday (5), the Court of Justice of Rio de Janeiro determined the blocking of R$ 300 thousand.

About 20 people have already sought the police station to file a complaint against Lívia Moura. The victims said they bought the fake tickets and were unable to enter the festival.

The Civil Police will now investigate whether anyone from within the Rock in Rio organization helped Lívia and was involved in the scheme.

On social media, Lívia posted photos as if she were working in the production of Rock in Rio. She wore a fake pass and said she sold the supposed tickets for half price. To negotiate with “customers”, Lívia used an application to exchange messages and an e-mail with the event’s logo.

Lívia has already had three other passages by the police for embezzlement. Among complaints and informal accusations, she is a defendant in a lawsuit involving Renato Augusto, a current Corinthians player, and was accused by a servant of the Rio de Janeiro City Hall. divert R$ 2.5 thousand.

Lívia is a defendant in a lawsuit that investigates a possible coup de BRL 225 thousand against soccer player Renato Augusto. Currently at Corinthians, the player played for Flamengo, where he met Lívia’s brother, former player Leo Moura.

In 2015, Lívia was hired to organize Renato and his wife’s wedding party in Rio de Janeiro. At the time, the couple lived in China, where the player played for several seasons.

Lívia claimed to have an events company and agreed with the player that she would hire the singers Thiaguinho, Péricles, Rodriguinho and MC Marcinho to play at the party. According to the complaint, she didn’t pay the contractors.

In this process, Léo Moura’s sister is accused of forgery of public documents, embezzlement and theft. In the complaint filed in January of this year, the MP mentions that she even forged Renato’s signature on a check.

In this Monday’s operation, agents found at Lívia’s house, in Freguesia, in the West Zone of Rio, a badge of her as an employee of the City Hall of Rio. According to the document, with a photo and registration number, she would occupy the position of “assistant 1” in the office of Mayor Eduardo Paes (PSD).

In a note, the city government informed that the registration number does not exist and that the document is fake.

“The City Hall of Rio informs that Lívia Moura was never an employee of the municipality and that the badge found by the police this Monday at her residence is fake”.

The police and the Public Ministry also found at Lívia’s house 7 Rock in Rio ticketsfour of which were false.

The deputy mayor of Jacarepaguá, Talita Galhardoaccused Lívia da Silva Moura of breaking into her bank accounts and withdraw BRL 2.5 thousand from one of your credit cards.

According to Talita, the crime happened in 2020, when the two were close. The deputy mayor said that Lívia came to confess the deviations made in exchanges of messages with her.

However, Talita said that she did not go to the police station to report the case out of concern for Lívia’s daughter and mother, who were having health problems at the time.

In exchange of messages between the two, Talita says she has images of Lívia carrying out the improper looting.

“I asked you not to abuse my consideration. You’re insisting on looking for people connected to me. (…) I’ll show you the images of you withdrawing money from me without my authorization, of course, and everything I already have in my hand. police to arrest you”

“I thought I wouldn’t need to write, but you’re playing the misunderstanding. I already warned you and you must be thinking it’s my joke. (…) If you’re crazy, you’ll be hospitalized or arrested”, Talita said, in a message to Lívia .

The Civil Police is investigating Lívia for the suspicion of committing the crime of embezzlement in the sale of Rock in Rio tickets.

According to investigations, she used the fact that she was Léo Moura’s sister to carry out the coup and may have caused enormous damage to the festival’s organizers. Only one of the victims would have made a transfer via PIX to Lívia de BRL 20.8 thousand.

The police and the Public Ministry also found 7 Rock in Rio tickets at Lívia’s house, four of which were fake — Photo: Personal archive

The Rock in Rio organization stated that Lívia has no relationship with the event. The festival also said that there are no records of a credential issued in her name. The woman was also not working on the test event and is not part of the festival’s operation.

Rock in Rio also stated that it is not responsible for tickets purchased outside the official sales channels.

According to the complaint, Lívia promised to deliver 26 tickets for several different days of the festival. The negotiation was done through a message exchange app and the victim also said that she delivered another R$ 3 thousand in cash to a neighbor of the suspect.

The victim said that, after making the payment, the former player’s sister stopped answering messages and answering the phone.

“People see the advantage, the cheaper ticket, and access the site that has a spelling similar to the event, Rock in Rio, and it is not. They buy the ticket at a lower price, they think they are getting a good deal and, in fact, they did not buy the ticket and she (Lívia) subtracted their money”, said deputy Felipe Santoro, responsible for the investigations.

‘If you made a mistake, pay it’, says Léo Moura

Former player Léo Moura stated, on a social network, that he does not get involved and does not condone the attitudes of his sister, Lívia da Silva Moura.

“I just want to make it clear again that my sister’s problems are absolutely hers, unfortunately for the family’s sadness. I don’t get involved and I don’t agree with it. .

“I have my family and a name that I care for for many years. We are saddened by what happened because we are human, but we are and will always be on the right side”, said Moura.

Léo Moura released a statement stating that it has nothing to do with his sister’s attitudes — Photo: Reproduction / Instagram

Previous Camilla de Lucas is followed by international famous. Know who it is!
Next Nubank is leaving analysts intrigued

photo: reproduction/Instagram Brazilian influencers have been showing the backstage of the World Cup on social …