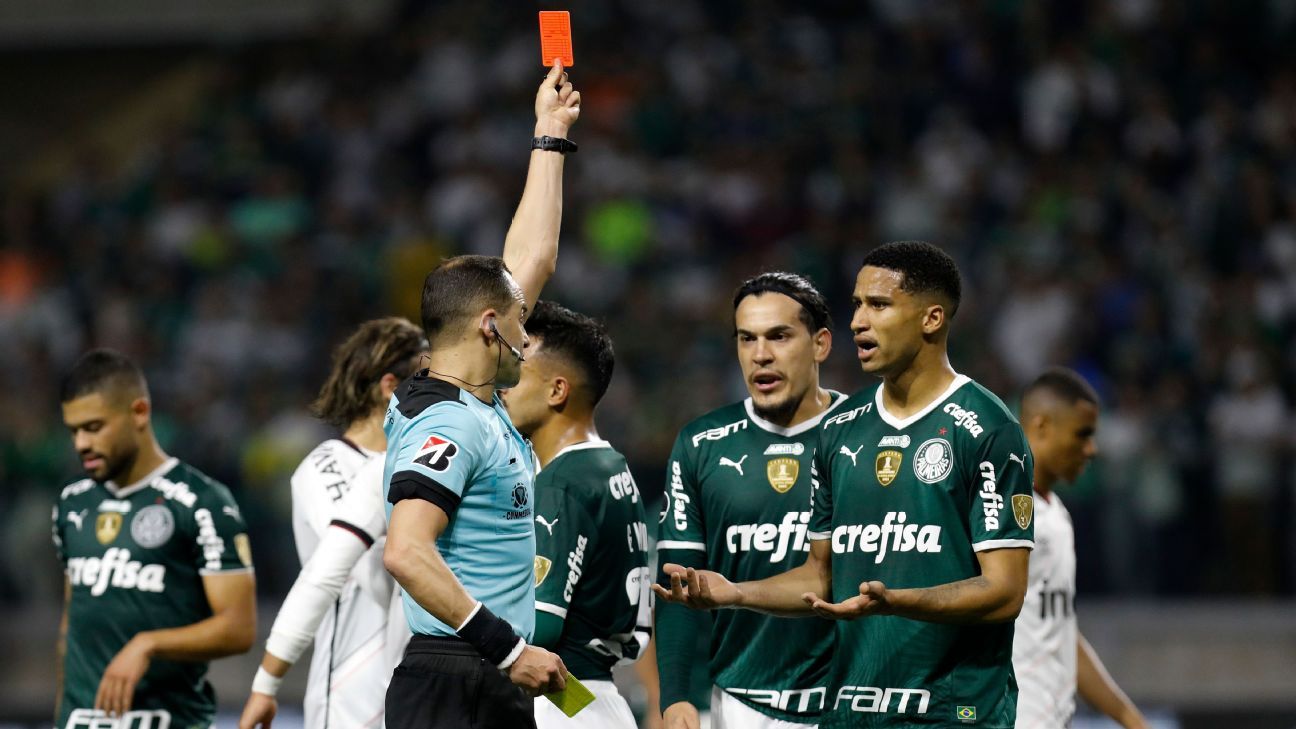 Murilo, from Palmeiras, received a direct red card in the 48th minute of the 2nd half after hitting Vítor Roque, from Athletico-PR.

CONMEBOL (South American Football Confederation) released on the morning of this Wednesday (7) the VAR audio of the bid that resulted in the expulsion of the defender. Muriloof palm treesduring the 2-2 draw with Athletico-PRlast Tuesday (6), by the CONMEBOL Libertadores.

In the 48th minute of the 1st time, the defender alviverde hit a strong entry in the leg of Victor Roquefrom Hurricane, and was punished with a yellow card by the referee Esteban Ostojich.

However, the person responsible for VAR, Nicolas Gallosummoned the referee to analyze the bid on the monitor, as he considered that Murilo’s foul was subject to a direct red card.

After briefly viewing the video, Ostojich agreed with Gallo’s idea and changed his decision, overruling the yellow and applying direct red.

Here’s how the dialogue went:

VAR: I want to see that entry.

Referee: The leg was up, it was up.

VAR: Follow, follow. OK, stop. The leg is stretched. Come back a little, give me the camera low boy.

VAR Assistant: Esteban, do not restart the game, we are analyzing.

VAR: No, not this plan, I want the side. Side plane. I want the camera inverted. Give me the inverted camera. I see intensity, I see a foot, a stretched leg…

VAR: Wait a minute, Esteban, I’ll get you. Give me a second I’m analyzing.

VAR: Give me another angle, because this one is too closed. Go back a little and don’t give the zoom.

Referee: I couldn’t see a fuller contact, but you who evaluate.

VAR: Give me back the camera we started, with the low boy. I see full contact.

VAR: Stretched leg and he bends his leg (by Vítor Roque). In other words: I have full contact with high intensity, with the cleats (of the boot). He never withdraws the leg, leaves the foot. Even after full contact, he still hits back.

VAR Assistant: And it was in a sensitive zone.

VAR: Yes, a sensitive zone. Let’s call him to see the bid for a possible red card. Give me the player number.

VAR Assistant: Here it is.

VAR: Leave this camera, I think it’s the best to identify this. And at main speed with a little bit of zoom. Only that.

VAR: There, Esteban. This is the point of contact for the leg. Watch the bid with looping.

Referee: Give me a wide camera, so I can see the intensity.

Referee: Nicolás, I will change my decision. I will give the red card. What is the shirt number please?

This was the only VAR audio released by Conmebol of the match.

In other words: controversial moves such as Alex Santana’s possible elbow to Rony and Fernandinho’s possible penalty also to Rony did not have the dialogues of the analyzes published.