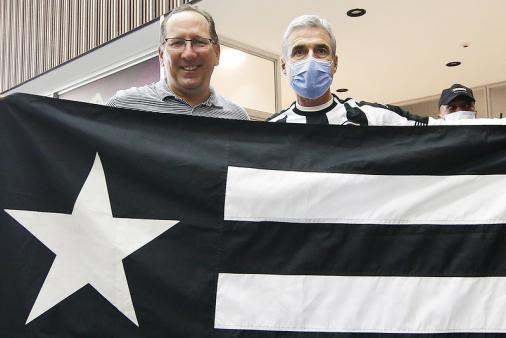 The integration between Botafogo and John Textor is constant and daily. At least that’s what Luís Castro, Glorioso’s coach, assured in an interview at CBF Expo, a business fair held in São Paulo, last Monday. The Portuguese highlighted the relationship with the North American.

+ Search for Rodinei, from Flamengo, reinforces Botafogo’s ambition in the market

– Both John and I were very aware of what the difficulties were at the time (hiring him). There is nothing worse in life than not being aware of ourselves and not being aware of the projects we have at hand. The relationship with him has always been very good. It was through him that I was contacted to coach Botafogo and since then we have been very in tune, knowing that we have the patience to overcome difficulties, always with courage and cold blood. That’s what we’ve been doing, trusting each other a lot. I trust him and I feel he trusts me. I trust a lot in the fans that support us, it is a climate of trust that is lived in Botafogo, but also everyone aware of the difficulties we are experiencing and will live until the end-he said.

The commander highlighted the difficulties experienced by the club at the beginning of this transition process. He also highlighted that he would like to speed up the process of integration between base and professional, but that he understands that everything is happening gradually.

– We all want things to go much faster. I won’t hide that I would like to have the training center, an academy that is much more linked to the A team, an organization that is all modernization designed for the future, but we know that all this takes time and will be done with the future. Team A with a better performance than it has ever had. We against Fortaleza only had Gatito from the remainder of Serie B. The entire team was remodeled throughout the season. Therefore, it is extremely difficult to demand much more from what has been done. The truth is that I demand, the players also demand of themselves so that we can stabilize, finish the championship well and with good results – analyzed.

– The season was clearly designed to experience a transformation in the squad and this transformation does not affect what is our ambition in the Brasileirão. We aim to stay in Serie A and, at the same time that this is done, try a new look at the academy, design a new training center and that will be the future of Botafogo as an organization. Botafogo’s football model is to train players and develop them. All this is still being done in an initial form. Our objective is to stay in Serie A and if possible still get a South American, we are two points away (from that zone), so everything is open. I’ve already said that we look up and that’s the way we’re going to continue – he added.

Previous Find out which movie Record TV is showing this Sunday at Cine Maior
Next US caves attract tourists for their beauty, but they can be deadly

during the program News Analysis today (29), the columnist for UOL Milly Lacombe spoke about …