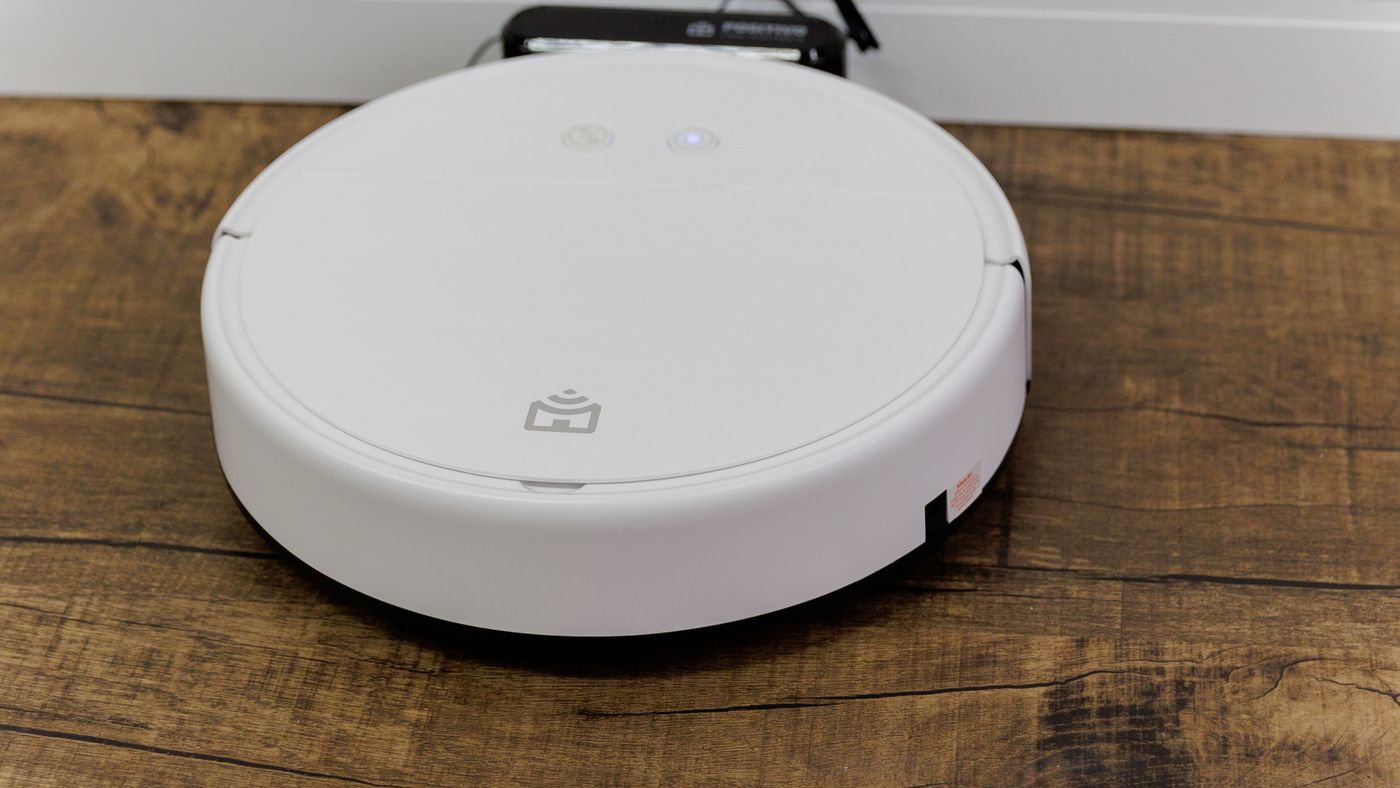 Positivo Casa Inteligente already has a great space in the Brazilian market with its connected home products and has now started to venture into a new segment – ​​home appliances. In mid-July, the brand launched its first line of robot vacuum cleaners. The devices hit stores in two versions: the Smart Robot Vacuum Cleaner Wi-Fi and the Smart Robot Vacuum Cleaner Wi-Fi Plus.

They stand out for their cost-effectiveness, the possibility of being controlled by voice or app, and for offering a “3-in-1” functionality, which allows the appliances to sweep, vacuum and mop in one go.

But do they actually work as well as the company’s promise? Do they, in fact, deliver the famous value for which the company’s connected home devices are so well-known?

In this review, I show you the main highlights of the Positivo Smart Robot Vacuum Cleaner Wi-Fi Plus, the most advanced model between the two launched. In the same way, I point out the positive points and the aspects that it leaves a little to be desired. Check out:

The Smart Robot Vacuum Cleaner Wi-Fi Plus has a very simple and minimalist design. It follows the same visual identity as most vacuum robots available on the market: it is a “disk”, with control and configuration buttons on the top, as well as an area cover that houses the dust and water reservoir.

At the bottom, it has three wheels and two slots to insert your spinning brushes. It is in this region that the user must glue two adhesive tapes to attach the cloth, which allows for a more thorough cleaning. All these items are included in the kit, so you don’t need to purchase anything separately.

The robot has three sensors spread out on the front, around its body. These sensors allow the identification of objects or walls, to avoid collisions.

Although they are very accurate and capture a possible obstacle well in advance, the position is a little unfavorable. As they are higher up, they end up not “seeing” some lower items, like our feet, for example. But it’s nothing that gets in the way of use, anyway. ;

In some cases, the sensor may not identify an obstacle because of the angle and position of the sensor, but even if the robot hits a wall, it still has a buffer area in front, which prevents damage in the event of a collision.

In addition to the front sensors, it also has an anti-fall system, which identifies steps and stairs and prevents it from falling. These, in this case, are very accurate and in the entire period that I used the robot there was no such accident.

In terms of specifications, it has a suction power of 2,000 Pa, its battery offers an autonomy of 100 minutes of use and it has two different reservoirs: a dust tank with a capacity of 600 ml and a hybrid with space for 200 ml of water. and 380 ml of dust.

The fact that the Smart Robot Vacuum Cleaner Wi-Fi Plus supports Alexa or Google Assistant is one of the device’s main strengths. With this, it is possible to create routines in the digital assistants and start a cleaning only with voice commands.

In addition, it is also possible to control it through the Positivo Casa Inteligente application — the same one used for other products of the brand, such as lamps, switches or surveillance cameras. It is quite complete and allows you to create automations, for the robot to always clean on a certain date and time, for example.

In the app, the user can set the cleaning mode. Positivo highlights that there are five options: smart, corners, spiral, zigzag and manual, but when I received the device I did not find the “zigzag” option.

Anyway, the available settings already help a lot to make a very efficient cleaning. If the “smart”, “spiral” and “corners” modes do not reach a specific location, the manual configuration allows you to “pilot” the robot as if it were a remote control cart, to reach all parts of the house.

I just need to highlight one important point in the app. It has a “map” function that shows the area the device has already passed. This gives you more control over the cleanup, but it doesn’t work as well as expected.

First, because the map does not always show a faithful result. In some cases, I noticed that the map in the app showed a much larger area than the rooms I actually have here at home.

Second, because it could be much more used. If it has sensors that can map the area it has passed through, Positivo could have implemented a method to “save” these areas and allow the user to define, in the app, which points or rooms need to be cleaned.

Of course, none of this interferes with the user experience, and we’re talking about a more affordable robot. But these are just a few “extras” that could further improve usability.

The performance is, in general, very satisfactory. Its two brushes can drag the larger subjects to the suction area which, in turn, is quite efficient at sucking up dust and other dirt scattered around the house.

I liked that the “3 in 1” mode is efficient to do a good job on the first pass. In simpler robots, it is usually necessary to carry out a session just to vacuum and then another one to wipe, but with the Smart Robot Vacuum Cleaner Wi-Fi Plus I was able to do everything at once without difficulties.

Of course, cleaning is much more efficient if you vacuum first and then mop, but this is not mandatory with the Positivo robot.

By the way, as I already highlighted, there are two reservoirs available in the kit. The simplest offers space only for dust, so its use is only for vacuuming. The other allows you to add water to keep the cloth always damp and do a thorough cleaning.

Both reservoirs have a HEPA filter that, according to the brand, can “retain 99.9% of the particles that cause allergy”.

Base and return to charging

An interesting feature for the model is the possibility to automatically return to the charging base. That way, after doing all the cleaning and when the battery is almost dead, it will take the time to locate and return to its place on its own.

This already exists in other robots, and it is good to see that Positivo has implemented the same in their device. But it is precisely in relation to this the main points where the Smart Robot Vacuum Cleaner Wi-Fi Plus needs to improve.

That’s because he doesn’t always identify the base well. So, during cleaning, it ends up bumping, dragging or even locking onto it. In some cases, it happened that he dragged it behind the sofa and was unable to return to the load because he did not “find” the accessory.

The kit includes tapes to fix the base in one point and I even did that, but in these cases it happened that the robot was stuck for a few seconds on it, until it managed to “let go” and go back to cleaning.

Another point is that, sometimes, he has a hard time finding the base. Here at home I left the robot cleaning, mainly, two rooms: the kitchen and the living room — the base was installed in the latter. In some cleaning sessions, he went back and forth from the living room to the kitchen for long minutes until he finally found the charger.

There were times when he even hit the base, made an attempt to fit in, failed, went back to the kitchen, lost himself for a few minutes and after a long period found his way back to the living room and its base.

Anyway, it’s important to point out that, even if it sometimes takes a while, it always finds its way back — as long as the base is accessible, of course.

The main competitor to Positivo’s Smart Robot Vacuum Cleaner Wi-Fi Plus is the Samsung POWERbot-E VR5000M. Both devices support sweeping, vacuuming and mopping at once and are further distinguished by the “unique” features of each.

The Positivo model stands out for supporting voice commands from Alexa or Google Assistant and having a well-optimized control by the app, with the option to create routines and automation, which allow the robot to do all the work itself.

The South Korean rival has a separate water reservoir with the possibility to choose the amount of liquid that will be released during use. In addition, you can choose the suction power, with options that are quieter or more efficient when cleaning the house.

Currently, the price range of the two models is the same. The Samsung model once cost nearly R$2,000, but is currently found at around R$1,500 and R$1,700. The Positivo, on the other hand, because it is more current, has not yet had much variation in price, and costs around R$1,500.

Without much ceremony, I would like to point out that if you are looking for the best cost-effective option when buying a smart robot vacuum cleaner, the Positivo Smart Robot Vacuum Cleaner Wi-Fi Plus is the best choice. It has 3-in-1 operation, which allows you to sweep, vacuum and mop in one go.

Its suction power is also very high and allows for a very efficient cleaning of the house, collecting almost all the dirt particles found on the floor.

In addition, control by the app or by voice commands also make its use much simpler. You can simply create routines and let it do all the work itself, without you having to “supervise” the service.

Its price range is currently more affordable than its main competitor, Samsung’s POWERbot-E, and it is much cheaper than other models that also offer hybrid operation and digital assistant controls.