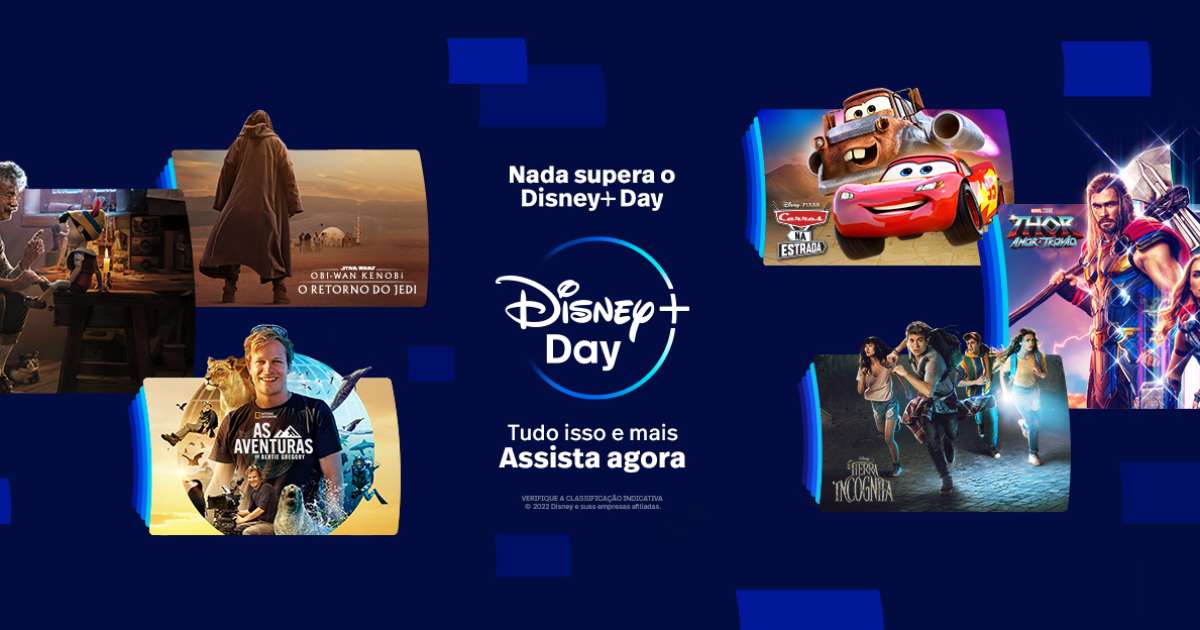 You already know the Disney+ Day, which this year takes place on September 8? Even if you already know what we’re talking about, you’ll be excited about the news we’ve gathered here. And if you don’t know, come discover with us a little more of the magic behind the screens!

The world of Disney has been part of our lives for a long time. It’s a really long time: in 2023, The Walt Disney Company will be 100 years old! The official fan club is called D23 due to the year of foundation, 1923.

To provide a unique experience to fans, Disney promotes the event D23 Expo every two years in California, with attractions and big announcements about your Marvel, Star Wars, Pixar, National Geographic and Star+ productions.

Tickets are already sold out for the 2022 edition. But if you can’t make it in person, don’t be sad: the Disney+ Day it’s the way Disney has found to get closer to audiences around the world.

If you still don’t have access to Disney+, take advantage of the offer that goes from September 8th to 19th: the subscription will go out by only BRL 4.90 for new subscribers during the first month!

To kick off the experience, on September 8, Disney+ subscribers will receive the long-awaited film. Pinocchiothe live-action version of the classic that marked generations.

Marvel fans were already given plenty of reasons to be excited in July, when the Multiverse Saga had several releases announced. But there are still secrets to be revealed very soon! In the meantime, you can enjoy a lot of content available in the complete Marvel collection on Disney+.

Disney+ Day will bring Thor: Love and Thunderwhich shows the adventures of the god of thunder alongside Valkyrie and Jane Foster (with the mythical hammer Mjolnir) facing the villain Gorr, the Butcher of the Gods.

You can also check out the special episode Making of Thor: Love and Thunder, featuring exclusive footage and interviews from the film’s set, in the Marvel Studios Avante docuseries. The 8th of September will also have a new episode of She-Hulk: Defender of Heroes.

With never-before-seen footage from a galaxy far, far away, fans of Star Wars can get excited about Obi-Wan Kenobi: Return of the Jedi. The special shows how was the creation and production of the series Obi-Wan Kenobiwhich brought back our beloved Jedi and the dreaded Darth Vader. And if you’re arriving now, the complete collection features all of the franchise’s original movies and series to watch and rewatch as often as you like!

In addition to its great live-action productions, Disney has always marked history with its animations. And on September 8, there’s a novelty debuting in the catalog!

If you’re missing Lightning McQueen and Mater, the animated series cars on the road and to you! The friends travel towards Mater’s sister and experience many adventures along the way.

Frozen fans can also celebrate and prepare the voice. Frozen a freezing adventure and Frozen 2 will receive sing-along versions, with song lyrics appearing on screen.

And many other series on Disney+ and Star+

Bringing various elements in the way that only Disney knows how to do, the series Terra Incognita tells the story of Eric and his sister Uma returning to the theme park where their parents were last seen before disappearing. Want more reasons to watch? The park was abandoned, the series has a touch of horror and this is a production original latin american from streaming. Unravel this mystery with Eric and Uma starting September 8 on Disney+!

Did you know that in addition to being the amazing captain marvel, is Brie Larson also a producer? She developed the docuseries Growing coming to Disney+ Day, with episodes that follow 18-22 year olds and their personal journeys as they make discoveries about the world and about themselves.

National Geographic productions are synonymous with beauty and a lot of adrenaline. Disney+ Day will also give us The Adventures of Bertie Gregory, a series that shows the explorer’s adventures through incredible places. From whales in Antarctica to lions in Zambia and a shark dive, the images are stunning and not to be missed!

In addition to Disney+, there’s also a lot of partner content on Star+. The new short of Simpsons, Welcome to the Club, will be available to Combo+ subscribers. Disney fairy tales have shown us that being a princess can be amazing, but Lisa seems to have doubts about whether it’s more fun to be good or bad. What will she choose?

Epic Marvel movies coming to streaming shortly after their theatrical debuts, Star Wars original series, exclusive animations and documentaries? We have! We have that and much more!

New subscribers can take advantage of the offer to gain access to the entire Disney+ catalog for just BRL 4.90 during the first month. After that, it will cost R$27.90 per month. There is also the option of a Disney+ and Star+ combo, for R$45.90 per month and the combo Disney+, Star+ and STARZPLAY for R$55.90 per month.

Of course the content is available at 4K Ultra HD resolution for you to really enjoy through the website or the app, which is available for cell phones, smart TVs, computers, notebooks, tablets and on the consoles Xbox and PlayStation. And you can share the magic with the people you love by creating up to 7 individual profiles and watching on up to 4 screens simultaneously.

Sign up now to enjoy all the content released on Disney+ Day and explore all of Disney’s magical world collections!