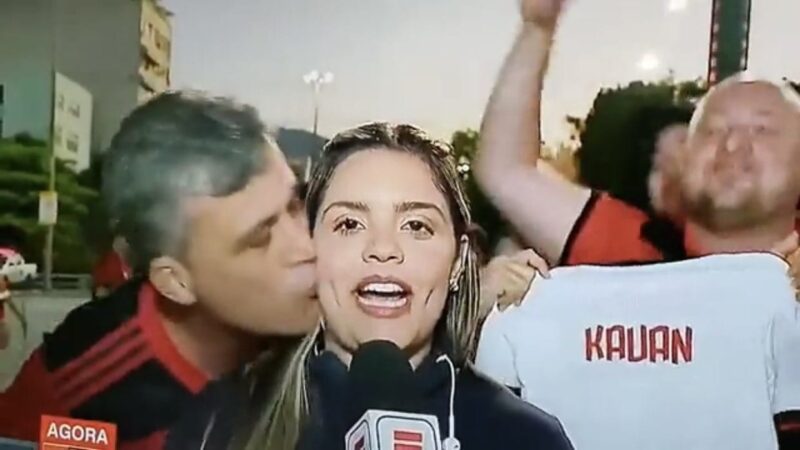 Flamengo’s game against Vélez for the Libertadores semifinal was in the background on Wednesday night (7). That’s because a regrettable scene was in evidence on the outskirts of Maracanã. Reporter Jessica Dias was making a live entry on ESPN, when she was surprised by a fan who gave her a kiss on the cheek.

The fact had repercussions on social media and Flamengo, as it should be, promptly took a stand on the episode, repudiating the individual’s attitude. The club emphasizes that the attitude does not represent the red-black fans and did not fail to provide support for the journalist.

“Clube de Regatas do Flamengo repudiates the harassment committed by a red-black fan with ESPN journalist Jessica Dias during a report before tonight’s match. It is regrettable that disgusting acts like this, which do not represent the Red-Black Nation, still happen”, publishes the club.

Read more: Members of the support group of Landim issue a note criticizing the management of the Flamengo Football Department

Watch what happened before the game between Flamengo and Vélez Sarsfield at Maracanã:

Flamengo fan is arrested with his son

According to journalist Isabelle Costa, the fan was arrested and taken to a police station after the act. The professional informs that Jessica’s team, consisting of the assistant and the ESPN cameraman, held the man and did not let him go.

She still informs that the man went further and it wasn’t just the kiss. The fan passed his hand on the journalist, making the crime even worse. The man’s son accompanies him to the police station while the man waits to provide the necessary clarifications.

On the field, the match between Flamengo and Vélez Sarsfield starts at 21:30 (Brasília time), at Maracanã. If you advance, the Mais Querido faces Athletico in the Libertadores final, on October 29.

palm trees Leaving the fans “with their hair on end”, the former leader was unsuccessful …