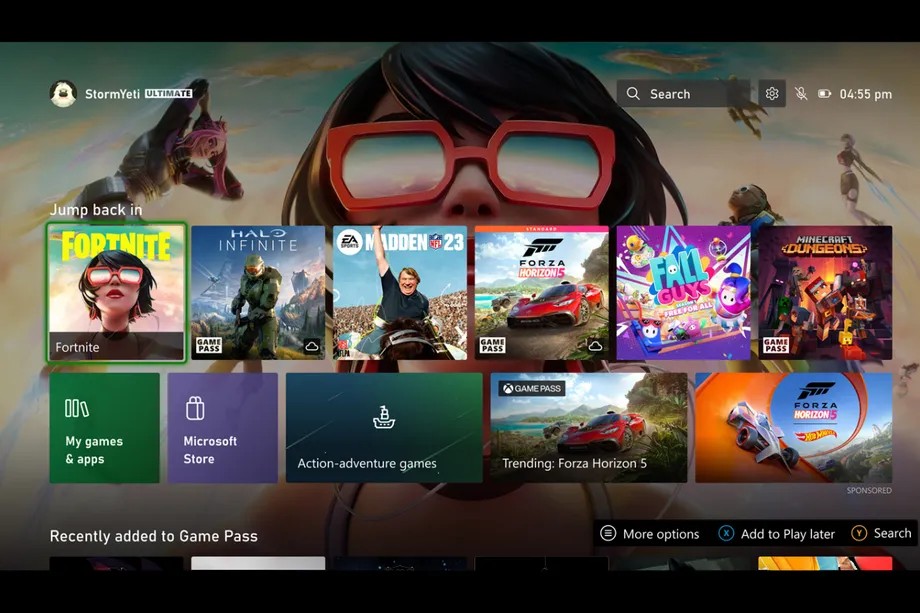 Microsoft has begun testing new changes to the Xbox homepage that are expected to roll out in 2023. The changes include tweaks to the layout and design to make it easier to find Xbox games and apps or navigate areas like the settings menu.

Microsoft will conduct a series of experiments on Xbox Home over the next few months before the official launch next year.

A random group of Alpha-Level Skip-Ahead Xbox Insiders will have access to some of the Xbox Home experiments this week. The first round of preview updates include a new “return” section at the top of Xbox Home, which includes recently used games and apps. You’ll notice that there’s no longer a larger tile for the most recently used app or game, and the interface is much more like Microsoft’s Xbox TV app.

We know that the Xbox homepage is where our players spend most of their time and it’s a very personal space. We also know that we can always be listening and learning how we can do better here, keeping your experience fast and familiar. With that, we’re starting a series of multi-month experiments to learn how to create a more personalized home screen experience and address some of the top trends and fan requests.

The Xbox TV app also has a search bar at the top and quick access to settings – Microsoft is bringing both of these features to the Xbox Home console’s main interface. There’s even a pinned tile for Microsoft Store access next to the usual “My Games & Apps” tile. Unfortunately, the ad block still exists and is pinned to the Xbox home screen.

As you scroll down, Microsoft will show selected categories and recommendations based on the games you play, and there should be a more consistent design with improved layouts.

So, what did you think of the changes to the interface?